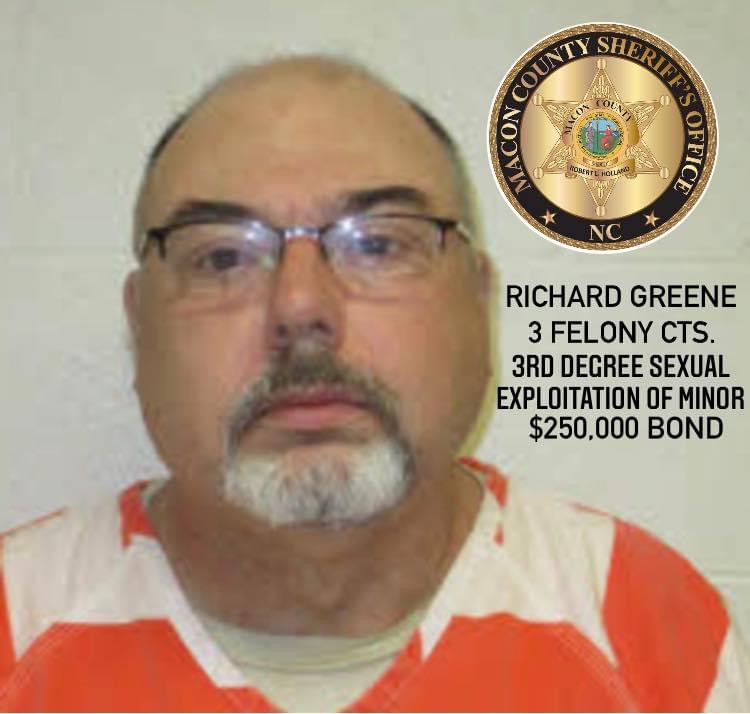 On January 6, 2022, Detectives from the Macon County Sheriff’s Office Special Victims Unit received an Internet Crimes Against Children (ICAC) Cyber Tip. The MCSO Special Victims Unit is also part of the NC State Bureau of Investigation ICAC Task Force and receives information in reference to crimes of possession, manufacture and distribution of child pornography. Subsequent to receiving the tip, an investigation was initiated by detectives and the suspect was identified as Richard Sevear Greene, of 109 West Old Murphy Rd. in Franklin.

A search warrant was issued and executed at the residence of Mr. Greene on January 12, 2022 by the Macon County Sheriff’s Office Special Victims Unit/ ICAC Task Force. Agents with the State Bureau of Investigation SBI/ ICAC assisted in the execution of the search warrant.

On January 12, 2022 Richard Sevear Greene, age 53, was arrested at his residence on 109 West Old Murphy Rd. on three counts of 3rd Degree Sexual Exploitation of a Minor. Mr. Greene is currently being held on a $250,000 secured bond.

This investigation continues and additional charges will be forthcoming.