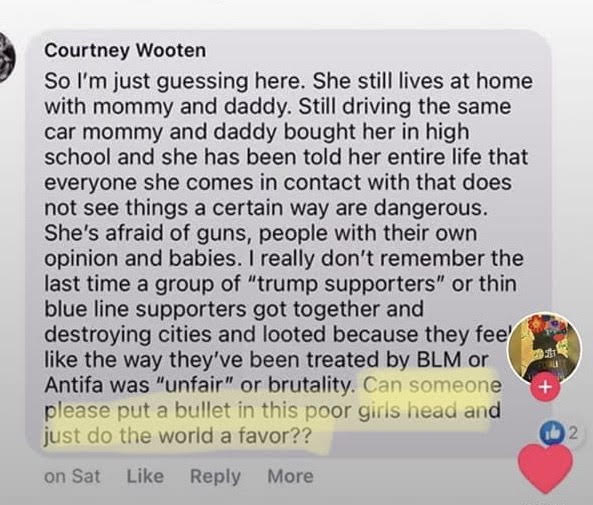 After a post on social media showing a deputy calling for “someone to put a bullet in her head” of a woman expressing her political views went viral, the Graham County Sheriff’s Office deleted their Facebook account and has launched an investigation, however, Sheriff Jerry Crisp is not providing any further details.

“I was made aware of it and yes I have been investigating it,” said Sheriff Crisp Monday evening. “We have been in contact with the other party and we have dealt with the situation but because it’s a personnel matter I can’t discuss it further.”

When the Tik Tok user “Dontbesosalty” shared an emotional video of her reaction to a parade of trucks in her hometown featuring Trump Flags, she never imagined she would be flooded with death threats and personal attacks as a response.

The Tik Tok user, whose real name is Lauren, shared a one minute video asking for people to be considerate and show compassion to each other during a time when politics have divided the nation. The original video Lauren posted was edited and reshared — taking it out of context. That video was then shared on Facebook, at which point Courtney Wooten, a Deputy at the Graham County Sheriff’s Office

Over the weekend the video went viral and has been viewed over 60,000 times. In the video, Lauren shows a screenshot of a comment posted about her video on Facebook by Courtney Wooten, a Deputy at the Graham County Sheriff’s Office. Wooten’s comment ended with “Can someone please put a bullet in this poor girls head and just do the world a favor?”

Wooten has since deactivated her Facebook account and following an influx of negative reviews on the Graham County Sheriff’s Department, that page was also deactivated.

The Graham County Manager Becky Garland noted that she was aware of the incident, but under state law, deputies work at the will of the Sheriff, although they are county employees.

“Because under State law the Sheriff has sole control over personnel, and because the issue pertains personnel, Graham County cannot comment,” said Garland. “The Sheriff of a County does his own hiring, terminations, and discipline. I have forwarded your request for comment to Sheriff Crisp regarding the officer’s status.”

While Garland did not comment on the specific incident, she did state, “Graham County Government does not condone any action or circumstance that would knowingly place a person’s life in peril.”

Graham County Commission Chairman Dale Wiggins said questions regarding Wooten’s employment should be directed to Sheriff Crisp. “I don’t know any Ms. Wooten. If she is a deputy then you should contact Sheriff Jerry Crisp,” Wiggins responded via email.

District Attorney Ashley Welch confirmed that her office had been made aware of the incident, and after reviewing the posts, does not believe Wooten’s actions were criminal.