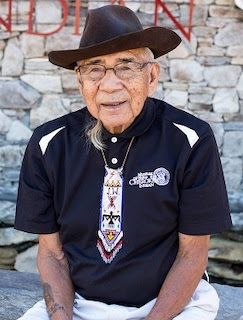 SYLVA – The only man in more than 200 years to be bestowed as Beloved Man by the Eastern Band of Cherokee Indians will have a highway in Swain and Jackson counties dedicated in his honor.

The Tribal Council bestowed Dr. Jerry Wolfe the honorable title of Beloved Man in 2013. He was the first to hold such a prestigious honor since the tribe’s last Beloved Man, Little Turkey, died in 1801.

The N.C. Board of Transportation recently approved a resolution to honor Wolfe by dedicating a 4.2-mile stretch of U.S. 441 between U.S.19 and U.S. 74 as the Beloved Man Dr. Jerry Wolfe Highway.

Highway signs, written in English and Cherokee, will be placed along the highway in early 2021, and a ceremony honoring Wolfe, who died a few years ago, will be held at a later date.

NCDOT board members considered Wolfe’s Beloved Man title, his vast contributions on the Qualla Boundary, his service in the U.S. Navy, his dedication to heritage and history and his volunteer work when they unanimously approved the resolution.

Born in 1924, Wolfe served in the Navy from 1943 to 1950 as a Signalman Second Class and as the only Native American in his Division. Following his active service, Wolfe returned to Cherokee to build his life with wife, Juanita, a life devoted to his family, his community and his culture.

He worked as a stonemason on the Qualla Boundary, he became active in tribal veteran events, and served as an ambassador of Cherokee in all his travels. Wolfe volunteered at least several days per week at the Museum of the Cherokee Indians starting in 1987 until his death in 2018.

Wolfe received the North Carolina Folk Heritage Award in 2002, he was awarded the Patriot Award in 2014, and in 2017, he was bestowed with the Order of the Long Leaf Pine and received an Honorary Doctorate of Human Letters from Western Carolina University.

“His dedication to proliferating the Cherokee language, teaching Cherokee history and culture and serving as a true testament of a Cherokee leader should be recognized,” Sneed wrote. “He was the best among us, and renaming this portion of the highway will serve as a constant reminder of what we should all strive to be in our daily lives.”