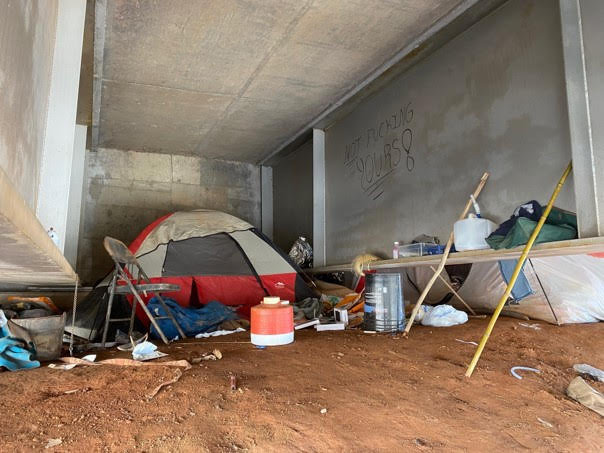 Since the beginning of the pandemic, the homeless population in Macon County has seemingly grown and makeshift dwellings tucked under town bridges have become an increasing concern for local law enforcement.

Enforcement issues surrounding the homeless camps date back nearly a year — with both the North Carolina Department of Transportation (NCDOT) and the Franklin Police Department  (FPD) disagreeing on not only what actions to take, but who is responsible for those actions. A public records request for emails between the NCDOT and the Town of Franklin show Franklin Police Department requesting the assistance of the NCDOT to address the issue as early as February 2021, however, NCDOT cited COVID19 protocols as the reason not to.

After being requested to look into the homeless camp under the bridge near Walmart, NCDOT said that without other resources for those individuals, the NCDOT couldn’t address the camp.

“Upon inspection of the homeless encampment under the dual bridges along US 441 near Walmart, we have determined that there is not an issue in regards to the safety of the traveling public,” states an email sent to Franklin Police Department by NCDOT County Maintenance Engineer Mark E. Hill on Feb. 22, 2021. “Also, we have researched the availability of homeless shelters in the area and have found none for the citizens to be sent to for help at this time.  The NCDOT currently observes current CDC guidelines during this time in regards to homeless camps, and it is stated that we are to not relocate them unless they are causing a safety concern to not only the traveling public, but to general public safety as well.”

Hill went on to say that NCDOT was not able to determine if the camp was a safety risk to the general public, outside of the scope of traffic issues, but if local law enforcement deemed it a safety hazard, NCDOT would provide assistance.

“I am not trained to evaluate the impacts to general public safety, but if your department feels that it is a concern, then we will defer to you,” said Hill in his email. “If there is no concern to public safety, then the NCDOT will allow these individuals to stay under the bridge until guideline revisions are initiated, or until there is a change in the threat level to public / traveling public safety.  I thank you for your time and help in this matter, and if you have any questions or concerns, please do not hesitate to contact me.”

Captain Devin Holland with the Franklin Police Department continued to correspond with NCDOT with the following email in March:

“ I recently inquired with Mark Hill for the Franklin Police Department to have authorization to remove homeless/vagrant persons from NC DOT bridges, as well as, erect No Trespassing signs on the few bridges that do not have them.

“Mr. Hill was helpful and gave me the State level explanation.  He told me that the NC DOT observes the current CDC guidelines during the pandemic period in regards to homeless camps, and they are not to be removed.  He said unless they are causing a safety concern to the traveling public or general public safety.  In no way am I complaining about Mr. Hill.  He has helped me in previous matters and was very helpful.  We are only reaching further for assistance.

“Our reasonings in removing these individuals are many:

“They appear to be stealing from neighboring retail businesses indicated by the numerous amounts of same item packaging.

“They are causing extreme littering which gets carried over onto other properties and roadways.

“They are in close proximity of the Macon County Greenway which is enjoyed by citizens and visitors.

“They have been offered all available resources in the Franklin area by myself, Chief Harrell, and others.  We have made a great effort in trying to help these people get in contact with housing assistance, employment, and drug addiction resources.

“This type of culture deteriorates a community.  We have been making great strides in improving the quality of life and tourism in Franklin.  I realize this is a statewide problem, but we would like to get a grasp on our problem before it gets out of hand.

“Two weeks ago I checked the bridge on U.S. 441 near Belden Circle.  A known homeless male was there sleeping.  It looked like the contents of a bedroom, kitchen, and trashcan were scattered all about.  I told him that if he cleaned up his mess and left I would not later charge him with littering and/or trespassing.  Later that same day I saw him and he said he cleaned it up.  I went to check, and sure enough, it was clean as could be.  With that being said we are trying to cooperate with these individuals.  We want a clean and beautiful Town.  The trash and litter is increasing which will ultimately be left up to the DOT to clean up.

“ A few years ago the DOT hired a private company to clean the U.S. 441 Bridge near Belden Circle because of all the trash, needles, etc…  When the bridge waters rise and lower they take with them the litter which is deposited downstream for example the Macon County Recreation Park and Greenway.

“Please know that we aren’t looking to lock them all away, we just want compliance, order, and for these individuals to improve their situations.

“Please consider our request to enforce trespassing which will halt the detrimental camping and loitering at the DOT bridges and any other DOT property.”

Around the same time Hill responded to the Franklin Police Department regarding the homeless camp off the highway, Franklin Police Chief Bill Harrell reached out to North Carolina House of Representative Karl Gillespie seeking assistance with the increasing litter on local roads and highways.

“As we discussed and you’ve noticed through your own eyes, we have had a tremendous but devastating uptick in litter on our local roadways,” Chief Harrell wrote to Gillespie on March 25, 2021. “However, it’s especially noticeable on our Town-State maintained roadways. This unfortunate rise is in large part because of certain town streets that are maintained by the DOT are the thoroughfares to the county landfill and the location of all fast-food eateries. Also, every receptacle/dumping station must pass through town by any means. Now, most realize it has been more noticeable recently because of the pandemic, presenting a halt to funds for state laborers, along with civic groups unable to swarm and tackle these problematic/despicable habits with regards to getting them cleaned up in a timely manner. Those contributing factors however can be addressed, at least to a limited degree, now that H196 has been passed. It is also not lost on me that we (FPD) have a part to play as well, but the reality is that not many of the littering offenders are going to distribute their trash directly in front of a marked cruiser and uniformed officer.”

Gillespie followed up with contacts from the state, which triggered an email from Wanda H. Austin, Division Engineer with the NCDOT, who claimed that there were efforts being made to address homelessness in the area.

“The department is in the process of picking up trash in all our counties.  You can also contact me directly should we miss an area that needs attention,” reads Austin’s email dated March 31, 2021. “Also, I have recently received guidance the department is able to work with local jurisdictions to address homelessness. I have requested Mark Hill to reach out to Chief Harrell and discuss this issue.  Let me know if we can be of further assistance.”

However, on April 27, Chief Harrell reached out to Rep. Gillespie again after not receiving any follow-up information from Austin or the NCDOT.

“I’ve never heard from or seen anyone (stated below) and if you’re back through in the near future, nothing on 441 that is very visible has been touched since who knows when, unfortunately,” reads Chief Harrell’s email to Rep. Gillespie. “We’re still getting complaints for State roads and our Rotary Clubs did a good portion of the access roadways to Lowes, Westgate and Rollermill Road – over 600lbs. We’re also using community service workers all around Town every time we get them. Goes without saying how big this bill would be…”

Rep. Gillespie then reached out to Austin again for a follow up which resulted in an email from Wesley Grindstaff, Division Maintenance Engineer with the NCDOT on April 28 which provided stats on the state’s clean up efforts regarding litter, but failed to address the homeless issue.

“There is no doubt that litter along our roadways is problematic, unsightly, and costly to taxpayers.  Over the past two fiscal years, Division 14 has spent an average of $975,000 per year on litter removal alone.  We perform several litter removal cycles by contract each year on our higher volume roadways…” reads Grindstaff’s email…” Additionally, Adopt-a-Highway, volunteer groups, individuals, and NCDOT forces also work to remove roadside litter.  NC’s Spring Litter Sweep occurred over the past two weeks and NCDOT forces alone removed over 2,000 pounds of litter from Macon County roadsides during this event. As Chief Harrell stated in his previous email, for whatever reason there has been a noticeable increase in roadside litter statewide this year.  NCDOT is putting considerable resources towards removal of this litter, but oftentimes it seems that the effort is futile because it is replaced with new litter within just a few days.  We are happy to work with you and others to come up with a solution.  Similar conversations are occurring in almost every county across the State.”

Captain Holland with the Franklin Police Department then attempted to reach NCDOT again on August 31 regarding COVDI19 protocols regarding removing homeless camps under state bridges.

“… has the NCDOT lifted the observance of the CDC guidelines?  We still have active camps set up under DOT bridges,” reads Holland’s email to NCDOT. “We would like to remove them due to the massive mess they are creating, public nuisances, and crime spawn. This mess is going to be quite the clean-up for DOT which we would like to deter now and in the future.”

Grindstaff responded to Holland on September 7 and informed him that the NCDOT was still not in a position to address the homeless camp, but they would provide support to the town if the town wanted to pursue enforcement action.

While NCDOT would be willing to assist the Franklin Police Department in cleanup if the camps were removed, local law enforcement said the issue falls in a long term fix. Without the NCDOT, who serve as the property owners where the homeless camps are located, being willing to trespass the individuals, law enforcement can remove the camps, but it would be temporary. Franklin Police Department has attempted to assist the individuals with other resources such as connecting them with Macon New Beginnings and other opportunities in the area, however, the individuals residing under the bridges have not been agreeable to accepting such assistance.

The camps are flooded with litter, drug paraphernalia, human waste, and runoff that can easily find its way into local rivers and streams. While the camps can be temporarily cleared out and then cleaned up, as they have been in the past, without a joint effort between the Franklin Police Department and the  NCDOT, a longterm viable solution has not been forthcoming.