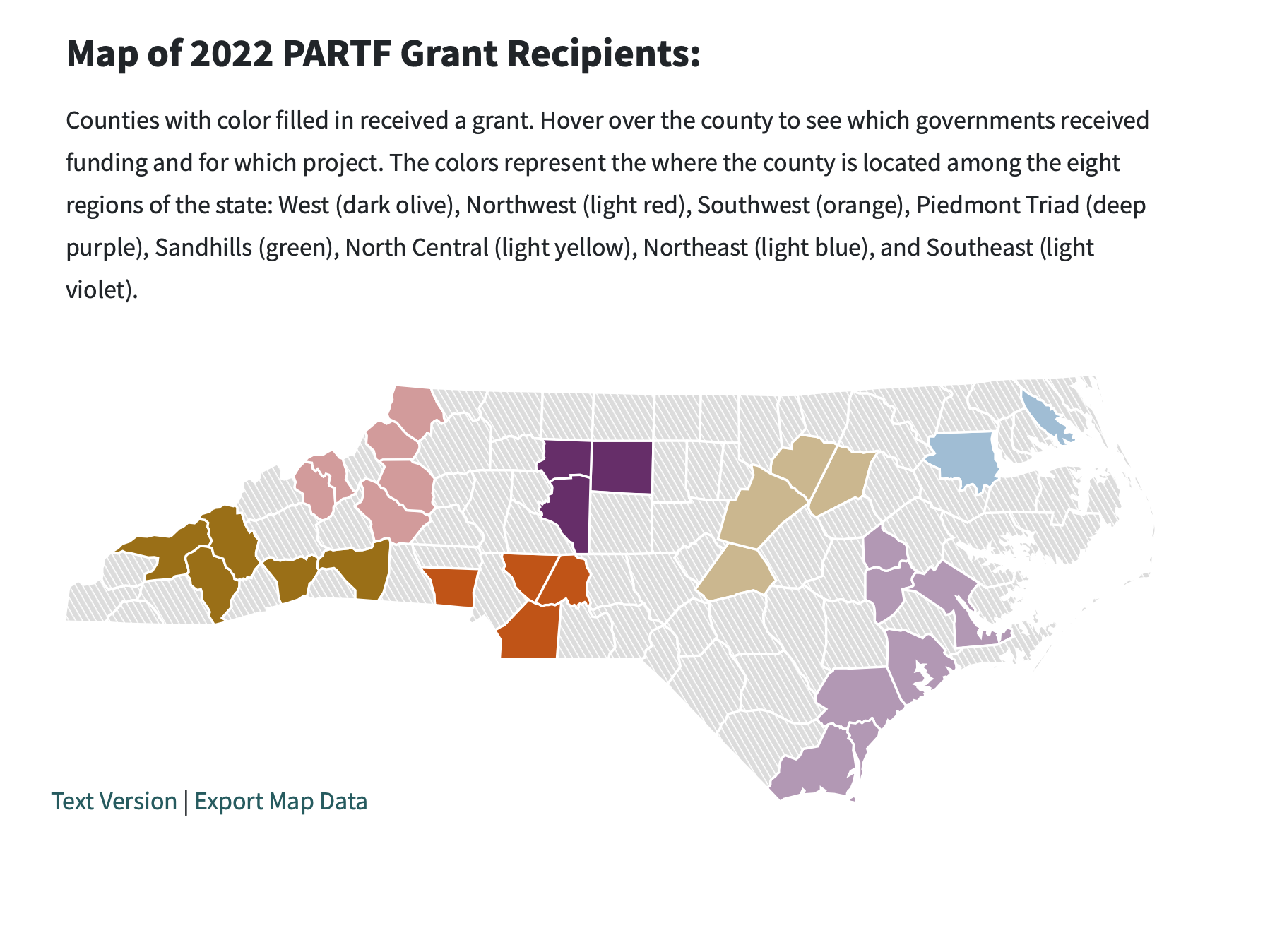 Since 1994, the North Carolina Parks and Recreation Trust Fund (PARTF) awards matching grants to local governments for parks, public beach access, and improvements in state parks. The statewide program helps local governments reach their park and public access goals to improve the quality of life in their communities.

This year, the N.C. Parks and Recreation Trust Fund (PARTF) will award over $17 million in grants to fund 39 local parks and recreation projects across the state. The North Carolina Parks and Recreation Authority (Authority) approved the grants at its meeting held on Aug. 26 at the Nature Research Center in Raleigh.

Local communities applied for the grants to fund land acquisition, development and renovation of public park and recreation areas. Each year, the Authority is required to allocate 30 percent of PARTF’s total funding to local government projects.

The Parks and Recreation Trust Fund is administered through the N.C. Division of Parks and Recreation, which is part of the Department of Natural and Cultural Resources. Local grants are awarded annually by the Authority at their quarterly meeting in August.

The Authority considered 49 local grant applications requesting $20.9 million in total. The maximum grant awarded for a single project was $500,000. Awardees must match funds dollar-for-dollar for the awarded amount.

“Our parks and recreation areas are so valuable to our communities and they’ve become more popular than ever,” Governor Cooper said. “These projects we’re funding today will give people even more opportunities in North Carolina to build healthier and happier lives.”

This year, $17.9 million was allocated to PARTF for local projects—an amount at least triple that of most years in the last decade. With these awards, PARTF has now made more than 1,000 grants to build parks in communities across the state.

Jackson County leaders approved the pre-application for the PARTF grant back in March to construction a public area in the Whitter/Qualla section of the county. Rusty Ellis, Parks and Recreation Director presented a site map to Jackson commissioners that included plans for the development of 11.15 acres that will include a 1/4 mile walking trail with potential for future expansion and development of the property that would allow joint programming with Smoky Mountain Elementary School. The funding will also allow for the park to have a 26’ x 44’ picnic shelter and a playground, multiuser green space, paved entrance and exit drive, and a parking area to accommodate 33 vehicles and 3 additional handicapped parking spaces.

“The park being planned in Whittier is one of two projects left in Jackson County’s 2013 Materplan and will serve residents in one of the most rural parts of the county,” said Senator Kevin Corbin. “I continue to advocate for these PARTF funds to come to the counties in my district. These funds have allowed many projects to move forward and make them affordable for our far western counties. PARTF funds are specifically designed for projects like this and I am proud to see Jackson County working to better serve future and current residents.”

The total cost of the Whittier project was estimated to be about $1,686,302 million, of which the PARTF grant will have a huge impact on ensuring the success of the sustainability of the new park. The PARTF grant will be met with a $1,186,302 local match to complete the new space.