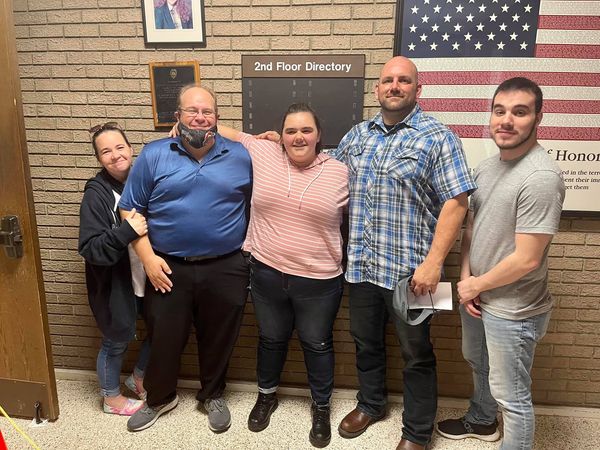 Michael Huffman, 41, was arrested and charged with misdemeanor assault on a female and misdemeanor child abuse after an August 2020 incident that was caught on camera during a virtual English class at Fairview Elementary School. After being found Guilty in Jackson County District Court Judge Kristina Earwood, Huffman’s attorney, Frank Lay, appealed the case to Superior Court and Wednesday, Huffman was found Not Guilty.

“Justice was served today in Jackson County Superior Court when a jury of twelve citizens found Paramedic and Father Michael Huffman NOT GUILTY of both charges brought against him,” Attorney Frank Lay wrote on Facebook. “Emma, a strong and resilient young lady, has maintained since the beginning that her stepfather did not hit her or harm her in any way.  After the Jury’s verdict today, Emma tearfully repeated that people had “finally really listened to me and believed in me” as she held on tightly to her stepfather in the Courtroom.”

At the beginning of the 2020 school year, as most students began classes online due to COVDI19, a student at Fairview Elementary School in Jackson County sat down for her virtual English class. With her fellow classmates also present for the online class, the 13-year-old student was recorded as a male, later identified as her 41-year-old stepfather, Michael Huffman, could be seen striking the student.

According to court records, an investigation was launched on August 19 when students and a teacher allegedly witnessed Huffman striking a 13-year-old girl while she was on video during an online class. The incident took place during a virtual English class for Fairview Elementary School.

A student in the class began recording when an adult male could be seen to what it appears to place the child in a headlock or wrapping his arm around the child’s jawline. The young student is visibly upset and crying in the video at which point off-screen you can see the child be hit in the head.

The recording was turned over to law enforcement and an investigation was launched with the assistance of the Department of Social Services.

The Sylva Police Department consulted with the District Attorney’s Office before charges were placed against Huffman. Huffman was arrested on given a $2,500 unsecured bond and released from custody. According to District Attorney Ashley Welch, as a condition of release, Huffman was not to have any contact with the victim.

“It was truly our honor to represent Michael Huffman in this case, as we fought for Justice for Michael and Respect for Emma,” wrote Lay. “We cannot say thank you enough to the citizens of Jackson County who were willing to serve as our Jurors, without their time and efforts Justice would not have prevailed.”