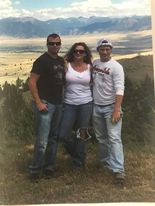 By Brittney Lofthouse on November 8, 2021

Melissa Rice died while in the custody of the Jackson County Sheriff’s Office in 2019 and now more than two years later, her family has closure. The family of the Sylva woman who reportedly “died by suicide” in the Jackson County Detention Center filed suit in federal district court in March 2020 against members of the sheriff’s department who handled her arrest and subsequent incarceration. In September the family settled the lawsuit, according to documents filed in federal court. After mediation and finalizing the terms of the settlement, the case was settled for $725,000 and closed.

Rice was originally arrested by Ridge Parris with the Jackson County Sheriff’s Office for trespassing at her ex-husband’s home in the Cashiers community and was facing several charges. Rice was transported by Patrol Lieutenant Stephen Watson with the sheriff’s department to Harris Regional Hospital for evaluation and treatment of a hand injury sustained during the arrest and was then taken to the detention center.

Rice, 49, died on Jan. 18, 2019, after she was found hanging by a phone cord in the detention center Jan. 16 while waiting for the magistrate. The incident occurred outside of the camera ranges within the jail.

Members of the Jackson County Sheriff’s Office called in the assistance of both the State Bureau of Investigation and District Attorney Ashley Welch to evaluate the incident, however, in July 209, Welch announced that no criminal charges would result due to no “culpable negligence or omissions” by law enforcement, or evidence proving that any officer “failed to perform a duty of his or her office.”

The lawsuit claimed that due to previous encounters with Rice, the Jackson County Sheriff’s Department had “considered her to be a risk of harm to other inmates such that she was segregated from other prisoners.”

Magistrate Judge Albert Reagan granted a restraining order against Rice at 4 p.m and on his court documents, noted that Rice had threatened suicide. JCSO Deputy Ridge Parris then had the final encounter with Rice at 6:15 p.m. to notify her of the charges she faced. No one within the detention center checked in on rice again until 7:06 p.m. at which time Detention Officer Emily Couvillon reported to have found her without a pulse and with a telephone cord from a wall-mounted telephone wrapped around her neck.

The lawsuit was filed by Rice’s sons Matthew Dillard and Madison Rice, on behalf of Rice’s estate, and was seeking a trial by jury, judgment greater than $1 million on three separate claims, and an award of triple the damages under NCGS 162-55 and attorney’s fees. However, the case was settled in court this week without a trial and was settled through mediation.