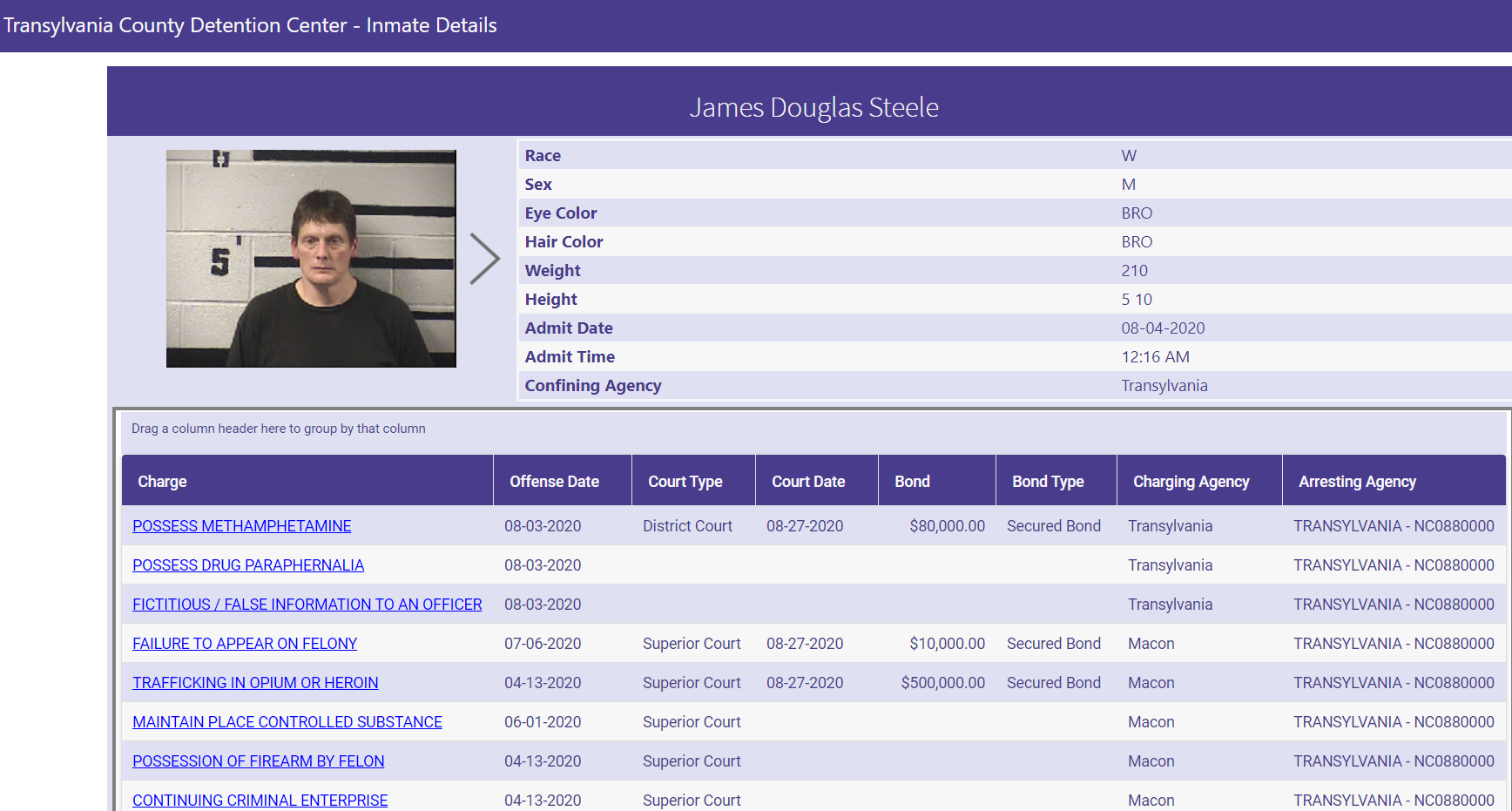 Last week, James Steele and Wade Ennis landed themselves back in jail for drug trafficking, this time in Transylvania County.

Steele and Ennis are better known as the J and the W in Macon County Sheriff’s Department 2018 Operation JAW Breaker arrests. Both Steele and Ennis have been out on bail since their May 2018 arrest, and while awaiting their court date in Macon County Superior Court have continued to rack up charges ranging from drug trafficking to breaking and entering.

Last week, Ennis was arrested in Transylvania County and charged with felony Possession of Methamphetamine and misdemeanor drug paraphernalia.

Steele was arrested and charged with felony Possession of Methamphetamine providing fictitious info to an officer and misdemeanor drug paraphernalia.

Ennis is once again out on bond and scheduled to appear in Transylvania County District Court on August 27 for the new charges. His Macon County Court Date is set for February 2021, as COVID19 has put a halt on all Jury Trials.

Steele however, remains behind bars today and will likely stay there until he is convicted. Steele was issued a Failure to Appear in Macon County Superior Court in June after not showing up for court. He is now facing bond revocation, which would revoke the $1.5 million bond he was issued back in 2018 and hold him in custody pending a verdict.

Named “Operation JAWbreaker,” the operation is aimed at dismantling a well-organized criminal enterprise involved in distributing large quantities of meth and heroin – not only in Macon County but in Western North Carolina and North Georgia. The 2018 operation resulted in the arrest of 25 individuals.  Of those 25 suspects, three were identified as co-conspirators and suppliers living here in the Franklin and Highlands area. The first names of these suspects James Steele, Arthur Potts, and Wade Ennis, were the inspiration for Operation JAWbreaker’s name.

During the gathering of intelligence, investigators discovered that drug purchases and transactions were arranged by James Steele, Arthur Potts, or Wade Ennis (JAW) and that the three men made additional arrangements for those drugs to be transported back to the area for distribution.

The trio appeared in Macon County Superior Court in September 2019 and not even a week later Steel was arrested and charged with felony possession of heroin and misdemeanor drug paraphernalia after Macon County Sheriff K9 Officer Sergeant Nick Lofthouse ran his K9 partner Diesel around Steele’s vehicle during a traffic search and received a positive alert.

Potts has also racked up additional charges since the 2018 arrest that made headlines.

While Steele, Ennis, and Potts are still awaiting trial, other individuals arrested from the 2018 Operation JAW Break have been convicted.

Leslie Anne Jones, 35, of Otto, NC, entered a guilty plea to one count of Conspiracy to Traffic in Heroin. She will serve a minimum of 70 months in the Division of Adult Corrections and was assessed a $50,000 fine due to her direct involvement in the negotiation and movement of trafficking amounts of heroin into Macon County.

Austin Henry Posey, 24, of Franklin, NC, entered a guilty plea to one count of Attempted Trafficking in Heroin. He was sentenced to a minimum of 19 months and placed on supervised probation which included an active jail sentence of 120 days, his primary role being a driver of more culpable parties.

Christy Teague Hurst, 41, of Franklin, NC, entered a guilty plea to one count of Attempted Trafficking in Heroin as well as Possessing a Firearm by Felon. She was sentenced to 38 months minimum and placed on supervised probation which included an active jail sentence of 390 days. Like Posey, her participation in the ongoing enterprise was limited to driving participants in exchange for controlled substances to support her addiction.

Jessica Elizabeth Keener, 32, of Franklin, NC, was the first conviction resulting from operation JAWbreaker. She entered a guilty plea to one count of Trafficking in Heroin and was sentenced to a maximum term of 93 months in prison, and will serve at least 70 months before she is eligible for release and must pay a $50,000  fine.

If you want to support The Southern Scoop’s mission of providing quality, daily, up-to-date news and information, consider donating to the Patreon Account today by clicking HERE. There are also advertising opportunities available for businesses and organizations across Western North Carolina.