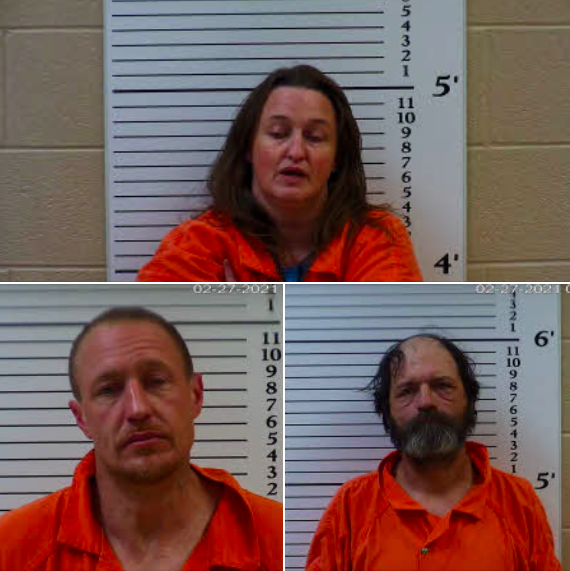 Murphy, NC— Sheriff Derrick Palmer announced the February 26, 2021 arrest of 53 year old Terry Leon Simmons of Andrews, North Carolina, 43 year old Tina Jane Hill of Marble, North Carolina, and 39-year-old Keith Ryan Noles also of Marble, North Carolina for conspiring to possess crystal methamphetamine.
In October 2020, the Cherokee County Sheriff’s Office conducted a search of 444 Lower Vengeance Creek Road, Marble North Carolina, the residence of Hill and Noles. In the search a trafficking amount of methamphetamine and several firearms were seized. From that search Hill and Noles were charged for trafficking in methamphetamine and felon in possession of firearm. Hill and Noles subsequently were released on secure bonds.
During the last week of February 2021, with the assistance of agents with the Department of Homeland Security Investigations, North Carolina ALE and Detectives of the Macon County Sheriff’s Office a joint investigation resulted in the seizure of a large quantity of crystal methamphetamine and additional firearms and other suspected illegally possessed controlled substances destined for Cherokee County North Carolina.
“Our agencies will continue to work together because as I have said for years, criminals don’t care about county borders,” said Macon County Sheriff Robert Holland. “Many of us are dealing with the same traffickers and working together is an absolute necessity.”
Keith Ryan Noles, and Tina Jane Hill were arrested and are currently incarcerated in the Cherokee County Detention Center for Conspiracy to Traffic Methamphetamine in excess of 400 grams. Both are under a $300,000.00 secure bond.
Terry Leon Simmons was arrested and is also charged with Conspiracy to Traffic Methamphetamine in excess of 400 grams. Simmons at the time of arrest had an additional amount of methamphetamine and paraphernalia on his person. Simmons is currently incarcerated in the Cherokee County Detention Center under a $350,000.00 secure bond.
“This has been a total team effort by our office working in cooperation with federal, state and local law enforcement agencies,” said Cherokee County Sheriff Derrick Palmer.”This is a large seizure and as we continue our investigation we anticipate additional arrests in the future. Further, as you can see these individuals continue their criminal activities even after arrest. We appreciate and are glad for the cooperation of our federal, state and local partners in these endeavors.”