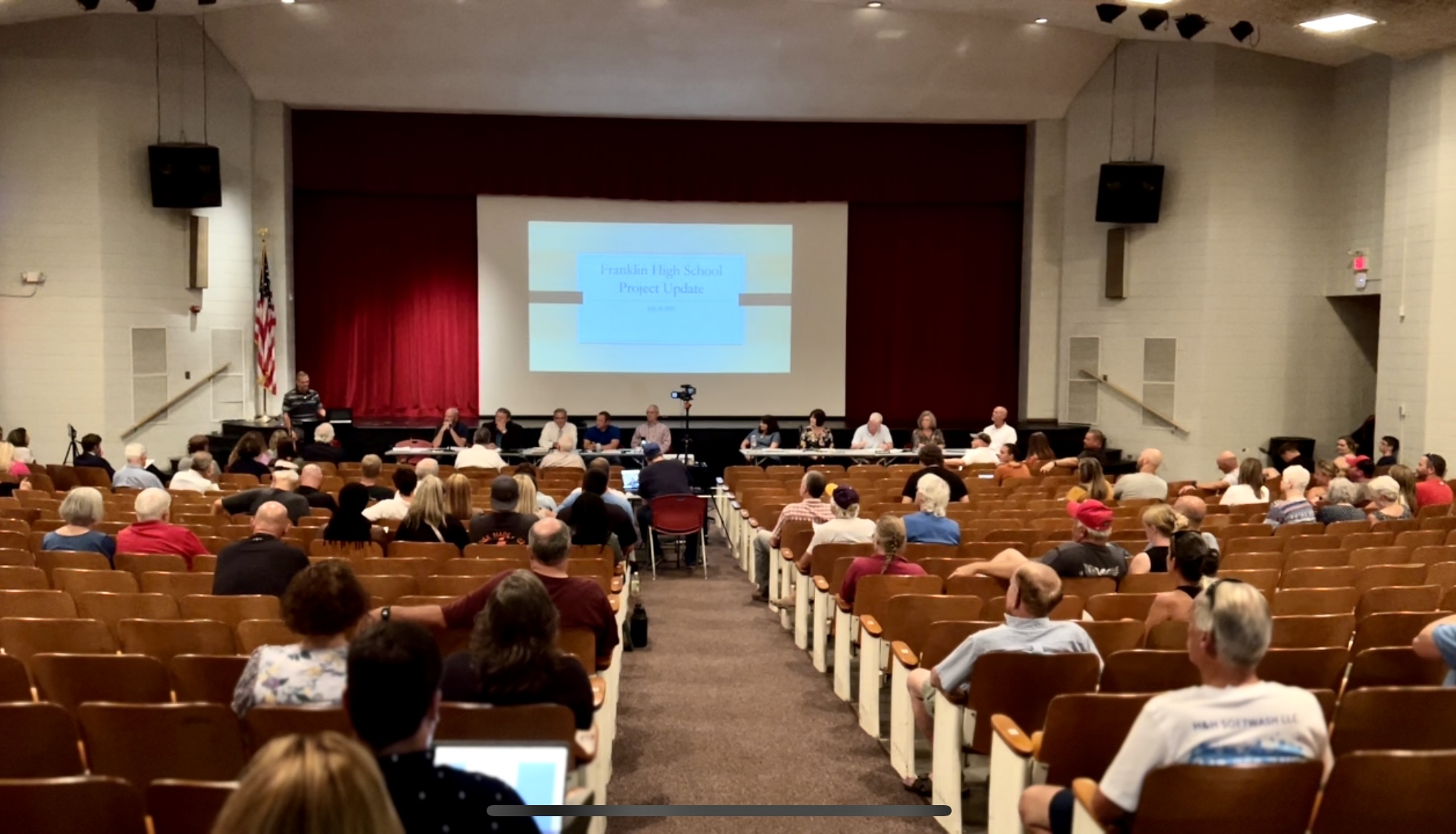 With the support of the board of education, the Macon County Board of Commissioners unanimously voted Tuesday night to move forward with plans to build a new high school facility on the current campus of Franklin High.

The first brick school building for a high school was constructed in 1910 on a lot between the present Franklin High School and the gym. The school was destroyed in a fire in 1919. A temporary wooden frame building was used until 1923 when a new high school was constructed. The Franklin High School building that stands today was built in the 1950s to replace the 1923 building and at 70 years old, has had substantial issues over the last decade, with the school board and county commissioner pouring in funding every year to keep the school operational.

After a decade of back and forth and talking about the needs at Franklin High School, the Macon County Board of Education sent a formal request to county commissioners in April 2021 asking for a new high school facility to be built on the current site of Franklin High School.

In June 2021, the Macon County Board of Commissioners voted to solicit RFQ (Request for Qualifications) for architectural design services for the project. LS3P Architect Firm won the bid and during the Tuesday night joint meeting between the Board of Commissioners and Macon County Board of Education Paul Boney with LS3P presented the company’s Comprehensive Facility Plan findings.

“When students are excited to go to school and aren’t dreading going there, it enriches their education so much more,” Roper said to a large audience in the FHS auditorium. “If you don’t enjoy going, you aren’t going to get the best out of your education.”

Roper said it was an honor to serve on the committee and appreciated Boney and LS3P for the comprehensive approach they took.

“They took time to teach me what we were talking about, wanted my input, and truly valued my opinions and my input,” said Roper. “They aren’t here to give us a one size fits all school — because that won’t benefit our community. They truly listened to our community and really took it to heart,” said Roper. “School is the center of our community — football games, basketball games, meetings, events, if you grew up here, we all came through FHS if we can come together to support each other in building something that future generations to benefit from and leave that legacy for future generations.”

LS3P evaluated every program and building at Franklin High School and analyzed the current and future needs of the school. With a comprehensive needs assessment completed, LS3P then compared the feasibility of accomplishing the set goals and priorities through renovating existing buildings on the campus vs. building an entirely new facility.

LS3P’s cost analysis for a new facility was based on a site concept of building a new three-story building on the location of the current practice football field. The proposal also addresses issues with the Franklin High School Football Stadium by shifting the field to the North and raising the field by 5 feet. A retention pond would also be installed to address the drainage issues that have caused flooding damage to the football field and adjacent parking lot.

The design places an emphasis on safety. The current Franklin High School campus has 100 entry points around the campus, making securing the facility virtually impossible. The proposed site concept would have one single entry point.

Mitch Brigulio with Davenport and Associates presented a comprehensive look at the county’s financial standing and funding options moving forward with plans to build a new high school facility on the existing campus at Franklin High School.

One considerable factor in the overall project cost and the impact it would have on property taxes in North Carolina will be decided in November when Macon County residents cast their ballots on a sales tax referendum.

North Carolina offers individual counties the option to increase the 6.75 percent statewide sales tax to an even 7 percent, with all revenues from the extra quarter-cent going back to the county — the base 6.75 percent sales tax is shared between the county and state.

As it stands, funding for the school system, including capital outlay projects and infrastructure needs, are funded out of the county’s general budget, which is funded through the county’s property taxes, meaning Macon County landowners and homeowners pay the bill. Neighboring counties like Jackson County, and Rabun County Georgia, have taken a different approach to fund school needs by approving an education-specific sales tax that generates revenue for infrastructure needs. Rather than raising property tax rates to generate additional revenue from property owners, a sales tax revenue would mean anyone shopping in Macon County and paying a sales tax, would be funding the school improvements, rather than just residents.

Sales tax is often rounded up to 7 percent already, and those dollars get rolled into the redistribution of sales tax across the state. Out of the 6.75 percent sales tax, less than 3 percent is currently returned to the county. An education-specific 1/4 of a penny tax would be guaranteed to Macon County each year. If approved, the tax could generate more than $2 million a year for Macon County Schools and SCC.

In order for Macon County to consider the quarter-cent sales tax increase, the Macon County Board of Commissioners would have to vote to put the referendum on the ballot for voters to either approve or deny. By state statute, the entire quarter-cent sales tax would be returned to the county in which it was generated, while the majority of sales tax collected in the county is reimbursed to other counties in the state.

If the referendum is approved in November, the property tax increase needed to cover the debt incurred to finance the project would be about 2 cents less than if the county votes against it.

The next step in the process will take place on August 9 during the next meeting of the county commission when the board will vote on the contract extension with LS3P for the schematic design of the project.