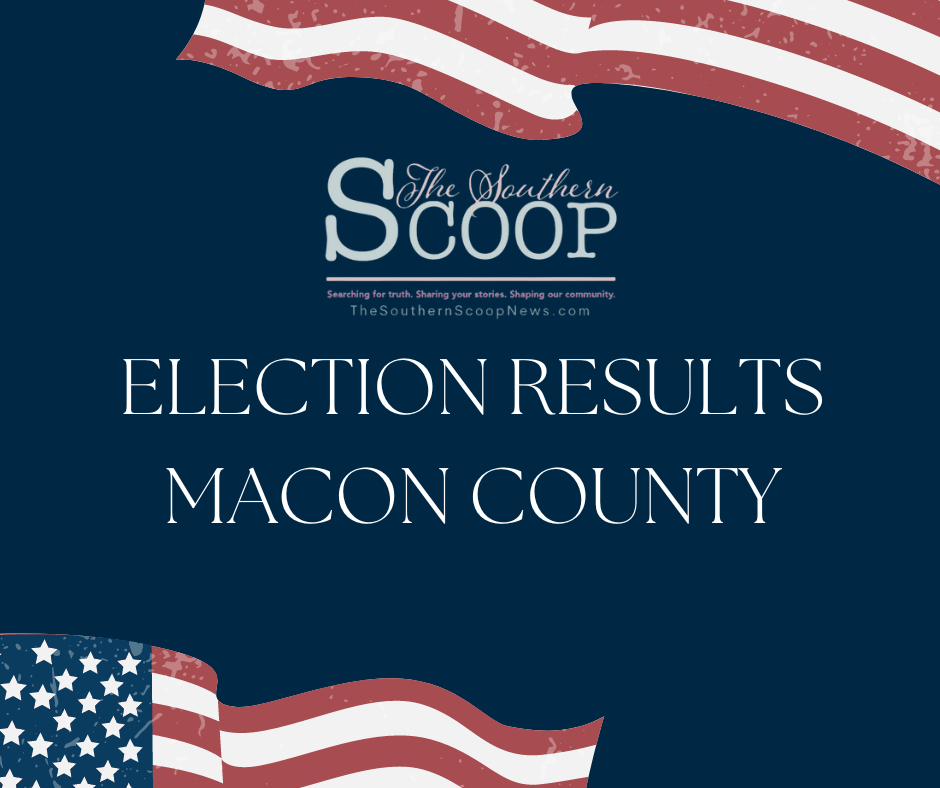 With 56.47 percent (15,793 out of 27,966 registered voters)  of registered voters casting their ballots in Macon County, voters elected the first fully Republican Board of Commissioners in the county’s history.

Republican incumbent Commissioner Gary Shields, along with newcomer Danny Antoine secured 36.5 and 34.2 percent of votes respectively, making them the top two vote-getters and next commissioners to serve Macon County. While Shields was re-elected to the board, Antoine, a Republican, beat out Macon County Commission Vice-chair Ronnie Beale, a Democrat, making all 5 seats on the board held by Republicans for the first time.

Republican John Shearl received 9,350 votes (62.67 percent) to Unaffiliated candidate Jerry Moore’s 5,570 votes (37.33 percent. Shearl’s election to the Board of Commissioners marks the first time in Macon County History that the District I seat on the board is not held by a resident that resides within the Highlands city limits.

The decision for Macon County Board of Education District 2 seat came down to the last precinct reporting — Nantahala. The final votes received at the Board of Elections headquarters pushed Stephanie Hyder Laseter just beyond the needed 30 percent of votes cast to 31 percent or 4,020 votes to Danny Reitmeier’s 3,846 votes (30 percent), to secure her seat on the board. Laseter was elected to the seat formerly held by Tommy Cabe, who passed away earlier this year. Cabe passed away suddenly, after the state deadline to remove his name from the ballot — giving voters the option to cast their ballots for him during the general election, resulting in him receiving 14 percent, or 1,844 votes.

Joining Laseter on the Macon County Board of Education winning the District 4 seat is Diedre Breeden. Breeden earned 55 percent (7,250) of the votes to beat out incumbent Carol Arnold’s 45 percent (5,887) votes.

According to vote totals, it appears a large number of voters in Macon County cast their ballots specifically geared toward voting For or Against the sales tax referendum and statewide elections and not local races.

The race for US Senate was decided late Tuesday night with Republican Ted Budd beating Democrat Cheri Beasley with 50.71 percent of the votes across the state. Out of the total 15,793 votes cast during the election in Macon County, the US Senate race reported a combined total of 15,636 votes.

The US House of Representative race, which Republican Chuck Edwards won with 53.94 percent of the votes over Democrat Jasmine Beach-Ferrara, saw a total of 15,597 of Macon County votes.

That roughly 15,000+ vote totals were reported for other statewide elections including the North Carolina Supreme Court races as well as the races for North Carolina Court of Appeals Judge. The North Carolina Senate District 50 race also garnered a total of 15,601 votes in Macon County — meaning there were 192 people who voted during the election in Macon County, however they did not vote for either candidate running for NC Senate District 50.  Incumbent Republican Senator Kevin Corbin overwhelming won re-election to the seat with 59,481 (66.15 percent) of votes across the district compared to Democrat challenger Karen Burnette McCracken who received 30,432 (33.85 percent) of votes.

However, when it came to the North Carolina House of Representative District 120 race — only 12,185 ballots were cast for Republican Karl Gillespie — who had no Democrat opponent. From there, the number of total votes cast continued to decrease with only 11,997 votes being cast in the NC Superior Court Judge Race for William Coward — who ran unopposed — meaning 3,796 Macon County voters didn’t vote for that seat at all.

That same trend was evident in the remaining judge seats on the ballot — albeit most of those were Republican seats — so one could assume Democrats simply didn’t vote for the seat due to lack of a Democrat candidate, however, NC District Court Judge District 30 seat 3 featured an unopposed Democrat candidate in Roy Wijewickerama and that race only garnered 6,771 votes — meaning 9,022 Macon County voters didn’t vote in that race at all.

The Macon County Board of Commissioners District 1 race included a total of 14,920— meaning 873 of individuals who cast their ballots didn’t vote in that specific race.

While the local county-specific races reported about 1,000 fewer votes cast in specific races than cast overall for the county, the sales tax referendum received 15,022 votes — garnering the same 15,000+ numbers of the statewide races on the ballot.