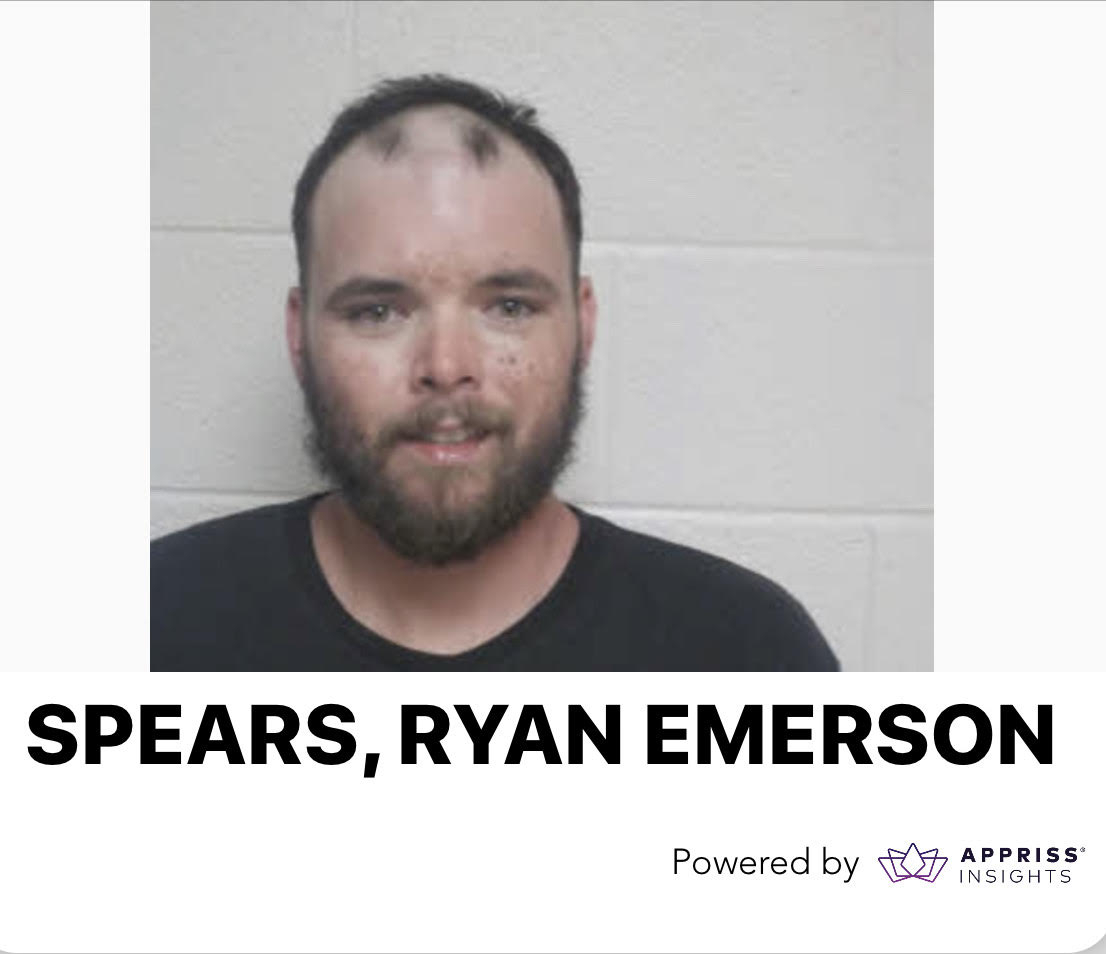 By Brittney Lofthouse on November 1, 2020

Shortly after 1 p.m. on Thursday, Macon County dispatch received a call of a driver on the South end of the county driving erratically and side swapping multiple vehicles, causing damage to those vehicles. When a Good Samaritan stopped on the side of the highway to check on the accident, the suspect, later identified as,  Ryan Spears, attacked the Good Samaritan and the victim of the car accident.

“As he [Spears] came at the individual who stopped to render aid, the Good Samaritan pulled an airsoft pistol hoping the man would back away thinking it was a genuine firearm, but instead continued coming at him in an aggressive manner,” said Macon County Sheriff Robert Holland. “A detective who was in the area stopped and took both individuals down with force and at gunpoint until additional units arrived.”

Later that evening, deputies responded to a domestic call also involving Spears. In that case, dispatch reported that multiple shots had been fired at a 12-year-old child and an assault on a female took place.

The victims were able to safely escape the residence once law enforcement arrived on scene.

“The suspect remained inside the residence, said Sheriff Holland. “Interviews were conducted with witnesses and arrest warrants were issued for the arrest of the suspect based on the assaults that took place. We had our trained negotiator attempt to communicate with the suspect to surrender peacefully, but had no success.”

Throughout the night, the Macon County Sheriff’s Office Special Response Team has members stationed in the woods observing the house and could see Spears through windows holding what appeared to be a long gun/ shotgun and occasionally hammering windows shut. Well into the early hours of Friday morning, law enforcement continued to attempt to keep the home secure and to get Spears to communicate by telephone or by coming onto the porch but was unsuccessful.

The Jackson County SWAT team was called in and with the assistance of the department’s Bearcat vehicle, law enforcement breached the perimeter of the home in an attempt to arrest the suspect.

“During the early morning hours, we introduced chemical gas into the residence,” said Sheriff Holland. “No sounds from the residence were heard and no communication from the home. After about an hour of chemicals being introduced into and through various windows, members of the Macon County and Jackson County Sheriffs Office tactical teams wearing chemical masks entered the residence and began searching two floors and attic for the suspect. After several minutes and multiple searches we were able to determine that the suspect was able to vacate the home at some point during attempts to communicate with him.”

While investigating the residence, it was obvious Spears had destroyed the inside of the home, which that combined with the chemicals, made searching very difficult as well as dangerous.

“Officers found a small window on the side of the home open and within feet of that window found a shotgun and a handgun,” said Sheriff Holland. “About thirty minutes later, the suspect was found at a convenience store just north of the residence. Franklin Police Officers had stopped in to check on the clerk and noticed the wanted suspect.”

Spears was booked into the Macon County Detention Center and held on a $1.5 million bond.