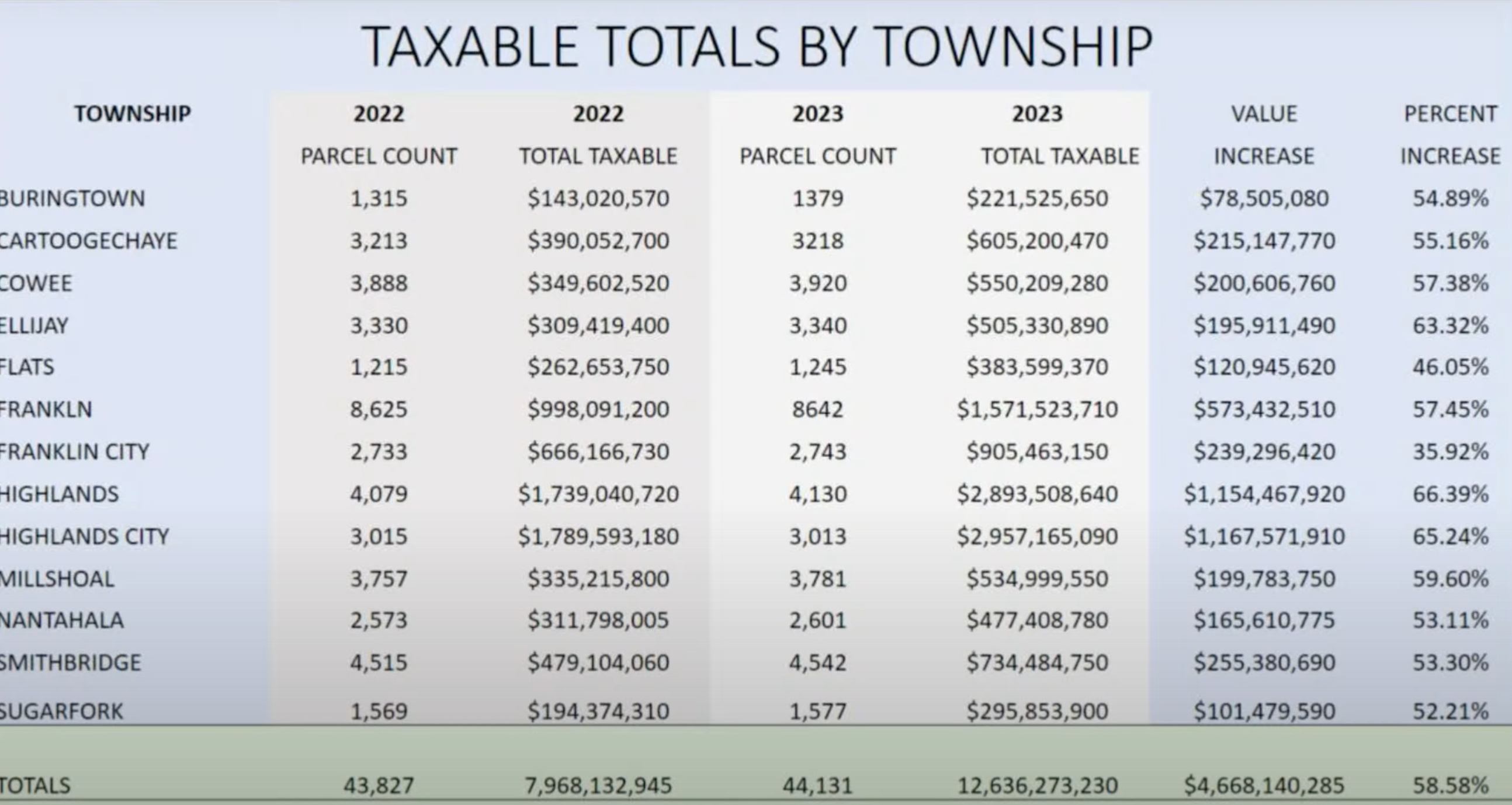 Macon County residents are likely to receive a shock in the mail over the next few weeks as the Macon County Tax Office sends out reappraisal notices following the completion of the 2023 property revaluation.

Macon County Tax Administrator Abby Braswell presented to commissioners Tuesday night that after the completion of the 2023 reappraisal, the total taxable property value in Macon County is $12.6 billion, nearly a $5 billion increase over 2022.

The county tax office monitors market data to accurately determine the market value of all properties. Staff visit and observe properties to verify characteristics, compare similar property sales and consider improvements or changes made. Revaluation captures these changes in value for property tax purposes. In simpler terms, it’s how much a home would sell for under normal conditions. As Braswell explained to commissioners, homes that were assessed in 2020 for $100,000 recently sold for double that value, with no changes being made. Because people were willing to pay double, the market inflated values, resulting in significant changes in revaluations.

Properties are revalued to ensure assessed values are based on the current market and establish equalization for property owners throughout Macon County.

Now that the revaluation is complete, property owners will be notified of their new assessed value in the coming weeks and will then have an opportunity to appeal the new rates if desired. On average, Macon County sees about 10 percent of property owners appeal, however, with the significant increase expected after this revaluation, Braswell said the tax office is bracing for an influx of appeals.

Since the last revaluation, home prices across North Carolina have increased significantly and according to Braswell, resulted in some values in Macon County jumping by more than 100 percent. The hike in property values could mean higher taxes for homeowners, but just how much will depend on the tax rate set by the Macon County Board of Commissioners during the annual budget process. The value of a property combined with the tax rate determines the property’s tax bill, which is mailed in early July.

Based on Macon County’s current tax rate of .40 percent of $100 of assessed value, a homeowner with a property valued at $100,000 today, would pay $400 in annual taxes. After the revaluation process, if that same home was reappraised at $200,000, the property owner’s annual taxes would double — resulting in an annual tax payment of $800.

Each local government is required to calculate a revenue-neutral tax rate based on the total value of properties within the jurisdiction. But calculating the rate is not the same as adopting the rate. That decision is up to elected officials. North Carolina General Statute mandates county’s produce a revenue-neutral budget, which is defined as the tax rate estimated to produce revenue for the next fiscal year equal to the revenue that would have been produced by the current tax rate if no revaluation had occurred. In addition, the rate can account for a few growth factors.

As it stands, with a property valuation of around $8 billion and a property tax rate of 40 cents per $100 valuation, Macon County’s total property tax revenue is around $32 million. With the revaluation property valuation of $12.6 billion in assessed value, the current tax rate of 40 cents per $100 valuation would produce a total tax revenue of $50.4 million. To produce a revenue neutral budget, Macon County will have to reduce the county’s tax rate.

State law requires the revenue-neutral tax rate to be stated in the annual budget message. During the budget planning process, county commissioners could elect to lower the tax rate, which won’t change the new revaluation, but could lower the overall tax bill. Jackson County lowered their tax rate following their last reappraisal. If Macon County decided to lower the tax rate from .40 to .37, the home would still have a new appraised value of $200,000, however combined with the new tax rate, the property owner would only have to pay $740.