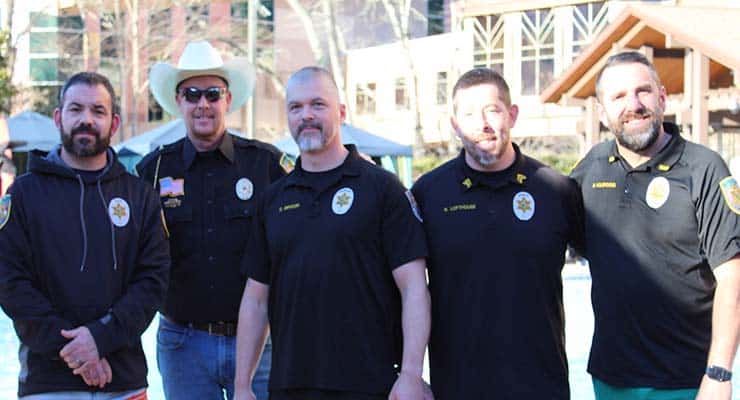 The annual NC LETR Conference, held Feb. 7-9, activated law enforcement personnel from across the state, educating officers about the 2022 campaign and providing ideas for successful fundraising initiatives in support of Special Olympics North Carolina (SONC). The NC LETR FREEZE! Polar Plunge, a successful fundraising initiative in itself, allowed officers the opportunity to fundraise and take the plunge alongside members from their respective agencies.

At 10 p.m. on Feb. 7, Holland decided he would challenge the three candidates running for sheriff within his agency to join in. That night, he posted his proposition on Facebook, calling on Captain Clay Bryson, Lieutenant Brent Holbrooks and Captain Dereck Jones to spend the next 20 hours fundraising their way to the icy outdoor pool at Harrah’s Cherokee Hotel and Casino.

“All three of them agreed and it kind of took off from there, people wanting to support the sheriff’s office and Special Olympics,” said Sergeant Nick Lofthouse of the Macon County Sheriff’s Office’s K-9 unit. “Within that day, we received those donations, all based on that post.”

Lofthouse is the owner of NC LETR Conference sponsor Public Safety Services, specializing in vehicle upfitting for patrol cars and fire engines. He has also been employed full-time for the past decade with the Macon County Sheriff’s Office. When Deputy Daniel Blagg of the Haywood County Sheriff’s Office reached out to Lofthouse regarding sponsorship opportunities for the conference, Lofthouse did not expect to be among the plunge participants.

“This is a good opportunity to open up some doors,” said Blagg. “They want to do more and hopefully, this will spark something.”

On Feb. 8, Holland, Bryson, Holbrooks, Jones and Lofthouse took the plunge, raising a total of $4,805 in the span of a day. Celebrating their fundraising success, Macon County Sheriff’s Office will continue their contributions to NC LETR efforts long after the retirement of Sheriff Holland. Holland, who always prioritized activating officers in activities that benefit Macon County’s citizens, values the impact that Special Olympics athletes have had on his agency and its members.

“The way I see it is, we deal with people from all aspects of life,” said Lofthouse. “We learn how to interact better with those individuals, whether we are helping someone at a sporting event or on a call. When we put officers in contact with Special Olympics and see how much joy it brings those people, it shows them that we can do even more.”