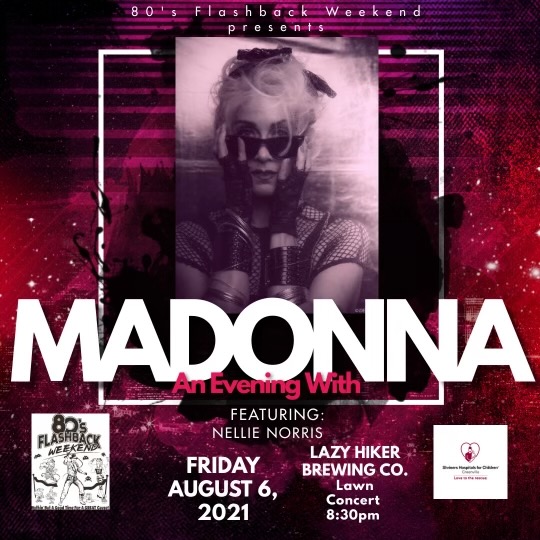 Bring on the hairspray, the press-on nails, and the blue eye-shadow, and join us for a totally 80’s tribute night.
This year the annual 80s Flashback Weekend benefiting the Greenville Shriner’s Hospital is honoring QUEEN OF POP 80’s icon — Madonna!
Nellie Norris (Nellie Norris Entertainer Fan Page) is an extremely versatile and accomplished Singer/Dancer/Tribute Artist who was born in Rochester, NY and settled in St. Louis until she left for college at 18. She graduated Cum-Laude from Oklahoma City University with a Bachelor of Performing Arts degree in Dance. She proudly calls Las Vegas home after performing in Branson, MO for three years.
Currently, you can find Nellie on Fremont Street, Downtown Las Vegas in the VJ Invasion 80’s Show all summer long and lead singing with the Whoa Nellie, Country Rock band around the area. Nellie has also sung backup harmonies countless times for many Elvis Impersonators around the country.
This well-rounded entertainers credits include performing for the Department of Defense s “MWR” tour in Korea plus Carnival Cruise Lines, several Las Vegas casinos, the Villa Roma five star resort in New York, Discoveryland s production of “Oklahoma” in which she portrayed the hilarious Ado Annie character and the list just keeps ongoing.
Shortly after arriving in Branson, MO she won the award for Newcomer of the Year. She performed as a featured entertainer in several shows including a television show. Nellie also starred in the Magnificent Late Nite show all in the White House Theater. Nellie is proud to have appeared as the Headliner for the show “Bareback” at Harrah s Hotel and Casino on the Las Vegas strip. This was a high-energy, modern country music production show with live singing and dancing. She has also worked as a lead entertainer and singer/dancer with top producers in and out of Vegas including Legends In Concert, Face Productions, Greg Thompson Productions and Tony Sacca.
Nellie is also thrilled to have performed her tributes to Cher, Reba McIntire, Loretta Lynn, Minnie Pearl, and CYNDI LAUPER (her favorite) for various productions in Vegas and on the road. Variety and travel fill her life and she puts her heart and soul into each project. She says it is exciting, interesting, and rewarding as performing allows her to be dramatic, silly, glamorous as well as herself all in one workday. Entertaining others and making people smile makes her happy and is not a choice for this fine and versatile entertainer. It’s an instinct.
Nellie is extremely grateful for her career and accomplishments thus far and says she knows her mother (who passed away just days before her arrival in Las Vegas) had a hand in it all. “I know she is always sitting in the front row,” says Nellie!
An Evening With Madonna (featuring Nellie Norris) is part of the 80’s Flashback Weekend: Always The First Weekend Of August and will be hosted on Friday August 6 on the lawn (weather permitting) of the Lazy Hiker Brewing Co. (concert begins at 8:30 pm).
The event is free, however, concert-goers are encouraged to give a “LOVE” donation. There will also be a variety of raffle prizes (6 tickets for $5/13 raffle tickets for $10) 50/50 CA$H and a silent auction. 100% of the proceeds raised will be donated to the Greenville Shriners Hospital.

Published in Community, Fun and Events and Latest News