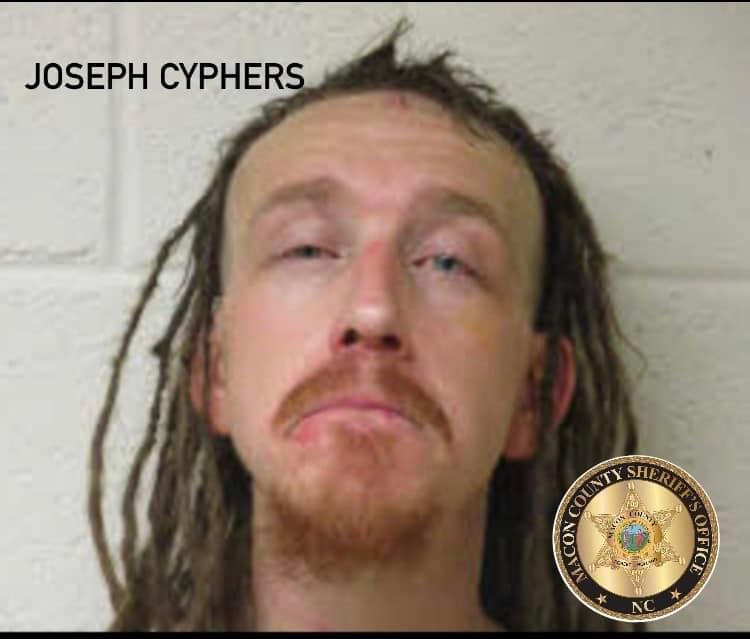 Two suspects were arrested today following the theft of a vehicle from one location, an attempted larceny at another location and a breaking and entering at a third location.

An out of town homeowner called to report seeing someone in their home on their home security surveillance system while they are away. The homeowner was out of state and was currently driving to Franklin when they noticed their security camera had first been activated around 4am today. It was then that they began to look at video recordings and then “live video” of their home and saw the suspect was still inside their home. As officers responded, the homeowners were able to report details of the suspect’s current movements to dispatchers including that the suspect did not appear to have any kind of weapon that was visible in the video.

Deputies with the Macon County Sheriff’s Office Patrol Unit along with K9 officers and Detectives immediately responded to the residence located south of town in the Tessentee Woods area of Macon County. Once they arrived on scene, deputies set up a perimeter and made multiple attempts to call out the suspect. After no response from inside the residence, a team of deputies from MCSO entered the home along with a MCSO K-9 unit. The deputies began searching room to room for the suspect while giving out verbal commands. Deputies maintaining the perimeter of the residence were able to see the suspect come out at an upstairs porch and immediately began shouting additional commands to him. Deputies inside the home were able to reach the vicinity of the suspect and took him into custody at gunpoint. In addition to this suspect, deputies located a second suspect near one of the scenes. Both suspects were transported to the Macon County Detention Center where interviews were conducted. In addition to the interviews, Detectives spent the day collecting evidence and processing the crime scene.

Earlier in the night, a homeowner reported that he found an individual fitting Joseph Cyphers description in his vehicle. The armed homeowner fired a gunshot in the air when the suspect attempted to approach him once confronted by the homeowner. This caused the suspect to immediately flee the area on foot. Multiple deputies responded to that scene but after an extensive search no one was able to be located. Detectives believe it was after that incident that Cyphers broke into a nearby home around 4am that he was found in.

Harley Simmel was located sleeping by deputies during the original call but at the time the vehicle he was in had not been discovered missing and had not been reported stolen by the owner. Deputies were not able to find any violations and were confident he did not fit the description of the original suspect. It was also raining throughout the evening and Simmel was not wet. Deputies were unable to make a connection to the original call and continued their search for the suspect who fled earlier. It was not until later in the day that a homeowner discovered his vehicle missing which was the same vehicle Simmel was found to be sleeping in. Based on interviews conducted by Detectives, they believe Simmel and Cyphers had been together at some point in the night but separated. They also believed Simmel was acting as a “Lookout” for Cyphers prior to being separated and falling asleep.

Joseph Cyphers was charged with multiple offenses including Larceny, attempted larceny, Possesion of stolen goods, injury to real property and Breaking & Entering. Bond was set at $100,000.00. Prior to this incident, Cyphers was being sought for Probation Violations following an earlier conviction.

Harley Simmel who was also taken into custody was also charged with multiple offenses related to the incidences and bond was set for him at $50,000

Sheriff Robert Holland states, “Not only did these two suspects commit crimes in our community in the middle of the night but the home Cyphers was found to be in had thousands of dollars worth of damage to it. It was obvious by his actions at the time of his apprehension and the evidence collected at the scene that he not only intended to steal from these homeowners but he went through their home randomly destroying things for no reason at all. The video recording of his apparent drug induced frenzy will be excellent evidence used in his prosecution by our District Attorney’s Office.”

Sheriff Holland concludes, “Some day I hope that Mr. Cyphers will look back at today and consider himself extremely blessed that he lived to tell about when he nearly got shot by a homeowner in fear for his life. Next time Jospeh Cyphers you may not be so lucky.”

Both Cyphers and Simmel remain in the Macon County Detention Center at the time of this release.

Thank you to the dispatchers and the members of the MCSO that responded to this incident today. Thank you for the risks and the sacrifices you and your family make daily for our community. It does not go unnoticed I assure you!