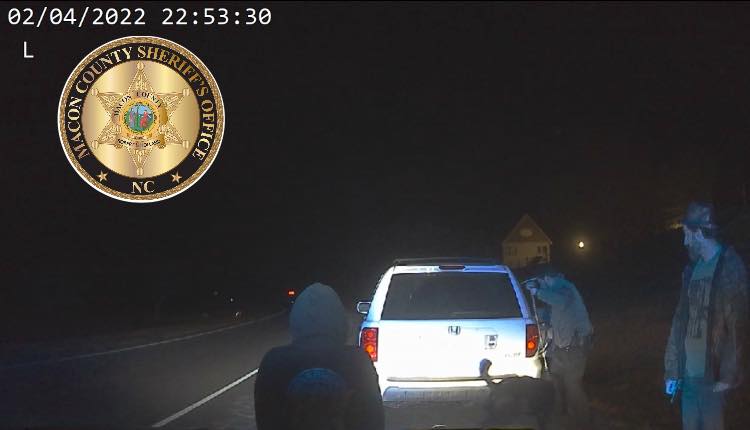 By Brittney Lofthouse on February 7, 2022

On Friday, February 4, deputies with the Macon County Sheriff’s Office arrested two individuals for Trafficking Heroin following a traffic stop. K9 Officer Nick Lofthouse & his partner “K9 Diesel” were patrolling on Highway 441 when the officer observed a vehicle occupied by two people leaving a local motel and begin traveling north. The officer continued to follow the vehicle and observed the driver make a moving violation. The vehicle continued north and while continuing to follow the vehicle, Lofthouse was able to identify the driver as an individual he knew as Amy Smith and knew she did not have a current NC Drivers License.
A traffic stop was initiated by the K-9 unit for the moving violation the officer had previously observed. Once the vehicle was stopped and as the officer approached the vehicle, he was able to smell the odor of what he believed to be marijuana coming from the passenger side of the vehicle. Additional Deputies were requested and arrived on scene.
Officers from Franklin Police Department also arrived to assist. Once the scene was safe for the K9 to be deployed, Lofthouse & K-9 Diesel performed what is referred to as a “Free Air Sniff” of the vehicle. During this procedure, the K9 gave an alert for the odor of possible illegal substances inside the vehicle. This allowed for officers to perform a more thorough search of the inside and outside of the vehicle. An officer with FPD assisted Lofthouse in that search.
During the search of the vehicle, several items were found. Items seized included marijuana, an open container of liquor, small baggies which are commonly used to package various amounts of illegal substances for sale, scales for weighing and selling illegal substances, and a trafficking amount of what is suspected to be Heroin or Fentanyl.
Driver, Amy Smith of Franklin, and her passenger were immediately arrested and subsequently transported to the Macon County Detention Center where they appeared before a Magistrate and were formally charged with Trafficking Opium / Heroin.
In addition to both suspects being charged with Trafficking in Heroin, the passenger of the vehicle, Joseph Grier, was additionally charged with possession of marijuana.
“This is another example of proactive police work and an example of officers from both agencies working together,” Sheriff Robert L. Holland said. “As officers from both agencies do routinely, all information gathered during this traffic stop and subsequent arrests has been shared with our MCSO/FPD Narcotics Unit and an investigation into where the narcotics originated from has already been initiated and will be ongoing.”
Smith and Grier appeared before Magistrate Justin Stamey who set a secured bond at $75,000.00 on each of the suspects. Smith and Grier currently remain in the Macon County Detention Center.
Additional arrests following subsequent investigations should be expected.
You can download the Macon County Sheriff’s Office mobile app at: https://apps.myocv.com/share/a42828734