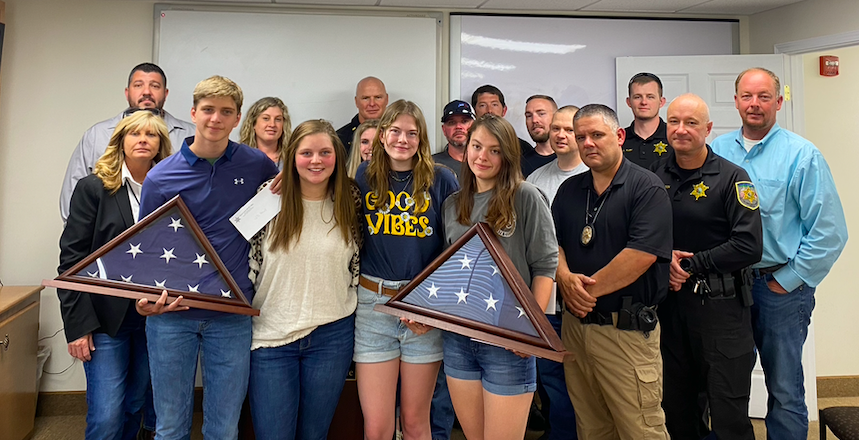 In honor of the anniversary of their passing, the children of the late Corporal David Head and his wife Dawn Head were presented with an undisclosed amount of money that was raised to go towards their education on Thursday, May 20 at the Macon County Sheriff’s Office.

David and Dawn tragically lost their lives in a motorcycle accident in Mountain City, GA on May 23, 2020. They were a blended family, leaving behind three daughters and one son.

After their passing, a Go-Fund Me page was set up for their four children to secure their future education. Many generous members of the community donated, and on May 20, this money was presented to the children, along with the flag that laid on David Head’s casket by Sheriff Robert Holland. Corporal Head’s shift-mates were also in attendance, as well as other officers with the Macon County Sheriff’s Office.

“I know firsthand what losing a parent at a young age feels like and how it can affect a young person throughout their life,” said Sheriff Holland. “David & Dawn Head loved their children immensely and were excited to see them succeed and where their lives took each of them.  In an effort to honor David and Dawn Head’s lives, we chose this week, the anniversary of their deaths but also the beginning of the rest of their children’s lives, to present each of their children with over $10,000 which has been designated to be used for their education.”