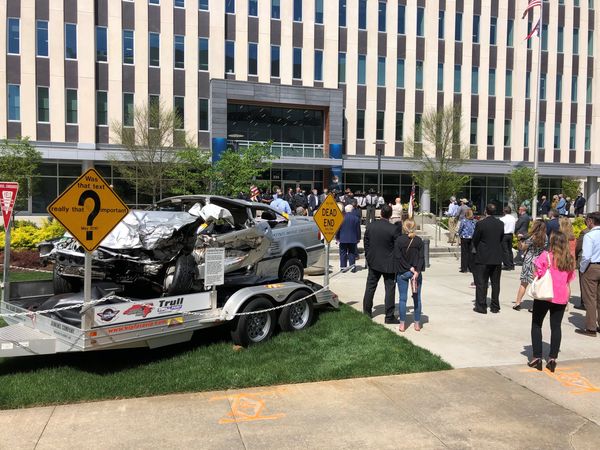 Ten years ago, Buncombe County teenager Ashley Johnson was driving to a tutoring job when she crossed the center line and hit a truck head-on. Investigators determined that she was trying to read a text message on her phone when she was killed.

“It was a three-word text,” Johnson said. “I never told nobody what that text was. The only thing it was, she retrieved it, she opened it up and it said where are you. That’s all it said. While she was reading that text she went left to center and hit a truck head on. And after that, everything has been downhill since.”

Rather than have her two-door BMW crushed, Ashley’s family donated it to VIP for a VIP Inc., a nonprofit, volunteer organization founded by Greensboro firefighters in 1998. The group reattached the roof that firefighters had cut from the BMW to free Ashley, then put the crumpled car, the airbag still deployed, on a trailer with signs explaining what happened to her.

Ashley’s car was displayed in front of the Raleigh Capitol Building this week and will remain there until April 23 when it travels to Macon County to be displayed at Safe Kids Macon County annual Safety Town event.

“Using a cell phone while driving is extremely dangerous and creates enormous potential for death or injuries on U.S. roads,” said Safe Kids Macon County Coordinator Nick Lofthouse. “The National Highway Traffic Safety Administration reported that 3,142 people were killed in motor vehicle crashes involving distracted drivers in 2019 across the nation. Just last year, officials say there were nearly 44,000 crashes and 157 deaths were caused by distracted driving in North Carolina. These are preventable deaths that we need to work together to prevent.” 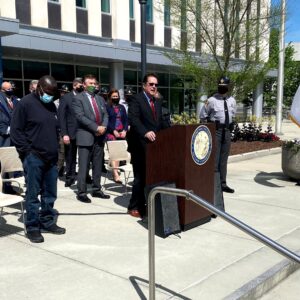 Macon County native and North Carolina Senator Kevin Corbin has garnered national attention since introducing House Bill 144, the “Hands Free NC Act” in 2019 when he served in the House of Representatives. Now, in the Senate, Corbin has partnered with a group of bipartisan lawmakers to once again push for the Hands Free NC Act to become law.

“We may not get this bill passed this year… it may be in two years… but I promise that we will get it passed,” said Senator Corbin. “I will continue to work on this until we get it passed and its in place to make our roads safer.”

Sen. Corbin’s bill would prohibit drivers from using a hand-held phone to talk, play games, watch video or access the internet while driving, including while stopped at a traffic light. Using a speakerphone or a Bluetooth system would still be allowed.

Commissioner Causey supports the Hands-Free North Carolina Act which prohibits the hand-held use of a cellphone or other wireless communication devices but allows the driver to make hands-free calls.  Drivers who are at least 18 years old would be able to use their cellphones if the phone is mounted in the vehicle and the call can be initiated or terminated by touching a single button, such as speed dialing.

Drivers caught violating the law face a $100 fine the first time, with higher fines and points on the driver’s license that could increase insurance rates for subsequent violations.

On April 24, Ashley’s car will be on display in Macon County at Safe Kids Macon County’s Safety Town event at the Robert C. Carpenter Community Building from 11 a.m. to 1 p.m. Sen. Corbin will be on hand during the event to discuss the legislation and tell Ashley’s story.