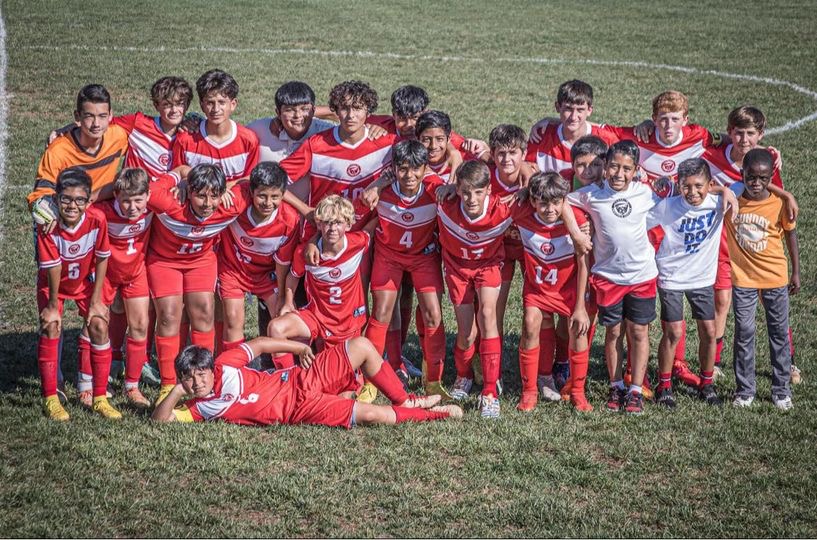 By Brittney Lofthouse on October 6, 2022

This week, the Macon Middle School team finished regular season play 10-0 with a perfect undefeated season winning all their home and away games in the Blue Ridge Athletic Conference. The season was filled with decidedly strong victories with the team scoring a total of 55 goals and conceding only four goals against their opponents.

The MMS team is looking forward to next week as they begin yet another season of tournament play taking on Polk Middle School at 4:00 p.m. at the Macon Middle School. For the fourth season, the men’s middle school team has seen play in the championship actually winning the first ever championship for MMS in 2019.

“We entered the season coming off a championship run from last year, and we weren’t sure what kind of team we would have,” said Head Coach Sam Vargas. “Last year we saw a strong 7th grade presence and a lot of them didn’t see the field at all. However, this year we came back, faster, stronger, hungrier to chase after earning a role on the team. It has been a really fun season to watch the kids grow from last season.”

The players began their season with workouts in the summer. Forty-five players tried out, but the team could only keep 20players. Vargas stated all 20 of the athletes were talented and could play, so every practice and game they worked to earn playing time and their role on the team.

Torres is only three goals away from beating the school record for most goals scored. Goal Keeper Ken Modlin broke the clean sheet record, no goals scored in a single game, with eight games.

“We have been playing really well and have gotten great results,” said Assistant Coach Bryan Wilkinson. “We have scored a lot of goals and only had a couple scored against us, but it is more than just the record and the goals, it is how the kids have developed. Soccer changes the lives of these kids, but it is not about soccer, it is more about them maturing and becoming who they want to be. We are just part of that development.”

“I am real proud of the parents, the school and the fans who have been super supportive of us,” he added. “The atmosphere at the games has been great. We are developing more of a culture around the soccer program and people are buying into what we are trying to do.”

For the last two seasons, the team has been led by Vargas and Wilkinson. Both coaches have a wealth of experience as playersand coaches bringing a strong passion for the sport to the MMS soccer program.

Vargas has 20 years of experience playing soccer and seven years as a coach. He said growing up soccer was his life, playing 365 days, seven days a week. He was a member of the FranklinMiddle and High School teams and also participated on travel teams winning hundreds of games during his career. After graduating from high school, he knew he wanted to coach and after taking a year off, he started as the goal keeper coach for FHS. While still coaching the high school goal keepers, he was named the head coach for Macon Middle School two years ago.

Originally from England, Wilkinson came out of retirement after 20 years of coaching in Florida to join the MMS team. Under his leadership as coach in Florida, his high school boys and girls team were nationally ranked and won several championships. He also played soccer professionally before he started coaching. He moved to Franklin to slow down, but now in addition to coaching soccer he is the MMS STEM teacher.

“Coach Wilkinson has taught me morals and values,” said Vargas. “He has helped me to understand how to build a program not just a team.”

“This year, the team’s strength is unity,” he added. “The team is playing for each other and not chasing individual notoriety. The team’s success has come from a culture that we have tried to create. One of discipline, hard work, and bantering. We aren’t just players and coaches, but we feel like family.”

Come cheer on the MMS boys’ soccer team next Monday as they play in the first round of the Blue Ridge Athletic Conference playoffs at the Panther’s home soccer field.