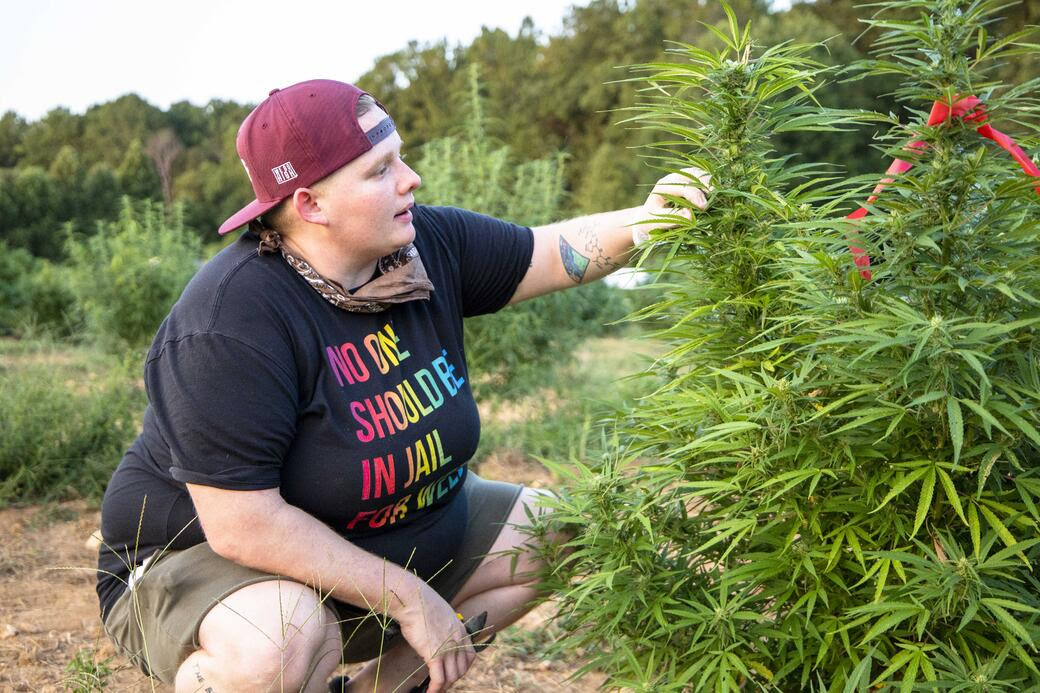 The bill’s last movement was on August 26 and is currently still in “Rules and Operations” in the Senate. The bill’s primary sponsor, Sen. Rabon serves as the Chair of the Senate’s Rules and Operations committee, so the likelihood of the bill being heard during the General Assembly’s short session this spring is high.

SB711 lists as a primary reason for the bill that “modern medical research has found that cannabis and cannabinoid compounds are effective at alleviating pain, nausea and other symptoms associated with several debilitating medical conditions.”

If it gets passed, it would join the other 36 states in the country where medical marijuana is legal — however small businesses across North Carolina are raising concerns about the bill and what it would do to the existing hemp farms in North Carolina.

Current hemp farmers, processors, and retailers in Asheville, Charlotte, Raleigh and other areas across North Carolina face a complete shut out of the cannabis market if the bill passes. There are just shy of 2,000 registered hemp farms across North Carolina with 73 in Buncombe County alone. Abby’s Angel’s, a growth operation located in Macon County said while medical marijuana is desperately needed… so is the ability for locally-owned, North Carolina businesses to participate in the industry.

“We at, Abby’s Angel’s, have mixed feelings about NC SB711, to say the least. On one hand, we see daily, the potential cannabis has to drastically improve the quality of life for someone.  It’s truly an amazing thing to be able to grow, process, formulate a hemp flower into a third-party lab-tested product, that can aid or suppress seizures, chronic pain, anxiety, and the list goes on,” said Tyler Brooks with Abby’s Angel’s. “There is a need for medical cannabis programs in North Carolina, for patients and nonpatients alike. Tax revenue from sales could do great things for our state if used correctly. On the other hand, we feel the proposed bill, is not in favor of patients, farmers, processors, or retailers.  This industry needs barriers of entry, and regulation, to keep a level of true professionalism, but the proposed requirements, will keep almost all, but 10, companies from being able to make the leap into the medical program, and will most likely, create a grey area nightmare for operating hemp business. We welcome a medical cannabis program in NC, we would just like to see one that’s more beneficial for more of the population, and allows more NC hemp businesses to be able to take part.”

For businesses to get licensed, all Medical Marijuana companies must manage every aspect from farming to the final sale (including owning and operating storefronts) — an expensive barrier for entry and something the majority of North Carolina farmers are not ready to do. The bill also will only allow 10 licenses for the entire state of North Carolina with each applicant being required to pay a  $50,000 nonrefundable fee, plus $5,000 for each production facility or medical cannabis center the applicant proposes to operate under the license.

The bill also states that each license requires 5 years of experience growing, testing, and distributing medical marijuana — something local farmers cannot immediately due since it is currently illegal in North Carolina, meaning farms and companies outside of the state would benefit from the bill’s passage.

To legally use and access medical cannabis, qualifying patients would obtain a registry identification card from the Department of Health and Human Services. To apply, patients must submit a physician-issued written certification stating that the potential health benefits of medical cannabis would likely outweigh the risks for the patient, along with an application form.

Patients under the age of 18 only qualify with their parents’ consent and if the parents obtain the cannabis and control its dosage.

The bill restricts patient access to a short-list of terminal diseases, without including mental health, autoimmune, chronic pain, and opioid use disorders, allowing only about 5 percent of NC’s population to qualify.

Qualifying conditions are cancer, epilepsy, positive status for human immunodeficiency virus (HIV), acquired immune deficiency syndrome (AIDS), amyotrophic lateral sclerosis (ALS), Crohn’s disease, sickle cell anemia, Parkinson’s disease, very limited post-traumatic stress disorder (subject to evidence that an applicant experienced one or more traumatic events), multiple sclerosis, cachexia or wasting syndrome, severe or persistent nausea in a person who is not pregnant that is related to end of life or hospice care, or who is bedridden or homebound because of a condition, a terminal illness when the patient’s remaining life expectancy is less than six months, and any other serious medical condition or its treatment added by the Medical Cannabis Advisory Board.

SB 711 instructs the Department to submit a report to the Joint Legislative Oversight Committee on Health and Human Services and to the Joint Legislative Oversight Committee on Justice and Public Safety by October 1 of each year. The report would include the number of registry identification card applications submitted, the number of qualifying patients and designated caregivers served by each medical cannabis center, and the number of suppliers, production facilities, and medical cannabis centers by county.

If the bill gets passed, there would be limits on the time of day it could be sold and where the businesses would be located. Some N.C. Republican lawmakers argue this bill could be the first step towards full legalization of marijuana in general. The bill’s primary sponsor, Sen. Rabon, a cancer survivor, has said SB711 would not serve as a gateway to recreational marijuana use.

Rabon said on June 23, after the Senate Judiciary Committee spent about 65 minutes on the bill, followed by 45 minutes during a discussion-only presentation, Sen. Rabon said, “to some people, it is a contentious issue, and to some people, it is not. I happen to be one who it is not. I know how rough it is to go through chemo and how bad it is to wake up every day and think it may be your last day on Earth. “There is nothing less compassionate on this Earth than to watch a person you love suffer when there is something that can ameliorate that suffering.”

For suppliers seeking license renewal, a nonrefundable fee of not less than $10,000, plus $1,000 for each production facility or medical cannabis center the supplier operates. Cannabis and cannabis-infused products would be exempt from the sales and use tax. Additionally, each supplier may “own and operate no more than four medical cannabis centers” thereby limiting the total number of medical cannabis distribution centers to 40 across the entire state.

We Go High NC is a southern Cannabis Justice organization working to increase cannabis access in prohibition states like ours, highlight the natural connection between cannabis consumption and prison abolition, and have come out vocally against SB711 because the bill fails to address decriminalization as SB711 Includes zero Decriminalization or Expungement efforts.

“It’s a missed opportunity to create a bill that recognizes cannabis as a medicine but doesn’t admit the damage done from years of cannabis criminalization in NC,” said We Go High representatives. “A truly compassionate act would have social equity baked in, reassess cannabis-related convictions, and include lower barriers to entry for small business. There is endless potential for this legislation but in its current form SB711 would help a very small number of individuals.”

The NC Department of Health and Human Services would “establish standards for and license up to five independent testing laboratories to test cannabis and cannabis-infused products that are to be sold in the State.”

The University of North Carolina is to create a “North Carolina Cannabis Research Program” to provide “objective, scientific research regarding the administration of cannabis or cannabis-infused products as part of medical treatment.”

While SB711 is bipartisan with the primary sponsor being Republican, many conservatives object to the bill due to federal laws that prevent individuals from owning a firearm if they also hold a medical marijuana card. Because the federal government says cannabis is illegal, medical cannabis users are thought to be utilizing a controlled substance. As such, according to federal law, medical marijuana patients cannot legally purchase firearms. The Gun Control Act of 1968 prohibits individuals from possessing guns or ammunition if they are addicted to or use any controlled substance. classifies cannabis as a Schedule 1 controlled substance, meaning it has no apparent medicinal value, has high abuse potential, and (according to the classification) both possession and use are illegal.

The Federal Bureau of Alcohol, Tobacco, Firearms, and Explosives (ATF) sent an open letter to all licensed firearms dealers in 2011 stating that one cannot purchase a firearm at a gun store if they hold a medical marijuana card.

Even if you’re in a state with legalized cannabis for medical or recreational use, you cannot legally own a firearm even if you are licensed for both. If you possess a gun, a medical marijuana card “invalidates” any firearm license you may have.

With significant controversy surrounding the legislation, North Carolina leaders acknowledge the need to clearly define and regulate medicinal cannabis use. Rather than sliding the bill on the end of the budget marathon, or placing it on the end of some other bill, Senate lawmakers assigned the bill to be heard in four committees total before it could make it to the floor for a final vote. If the bill were to become law, it would make North Carolina one of the most tightly regulated states for medical marijuana use.

SB711 is one of nearly a dozen attempts to legalize medical marijuana in the state since the first was tired during the 2009-2010 sessions. None of the previous bills, including the most recent House Bill 401 in 2019, advanced out of the first committee step. SB711 has slid by several hurdles and will likely advance out of committee during the short session.

To learn more about efforts to improve SB711 by farmers across North Carolina, click here.