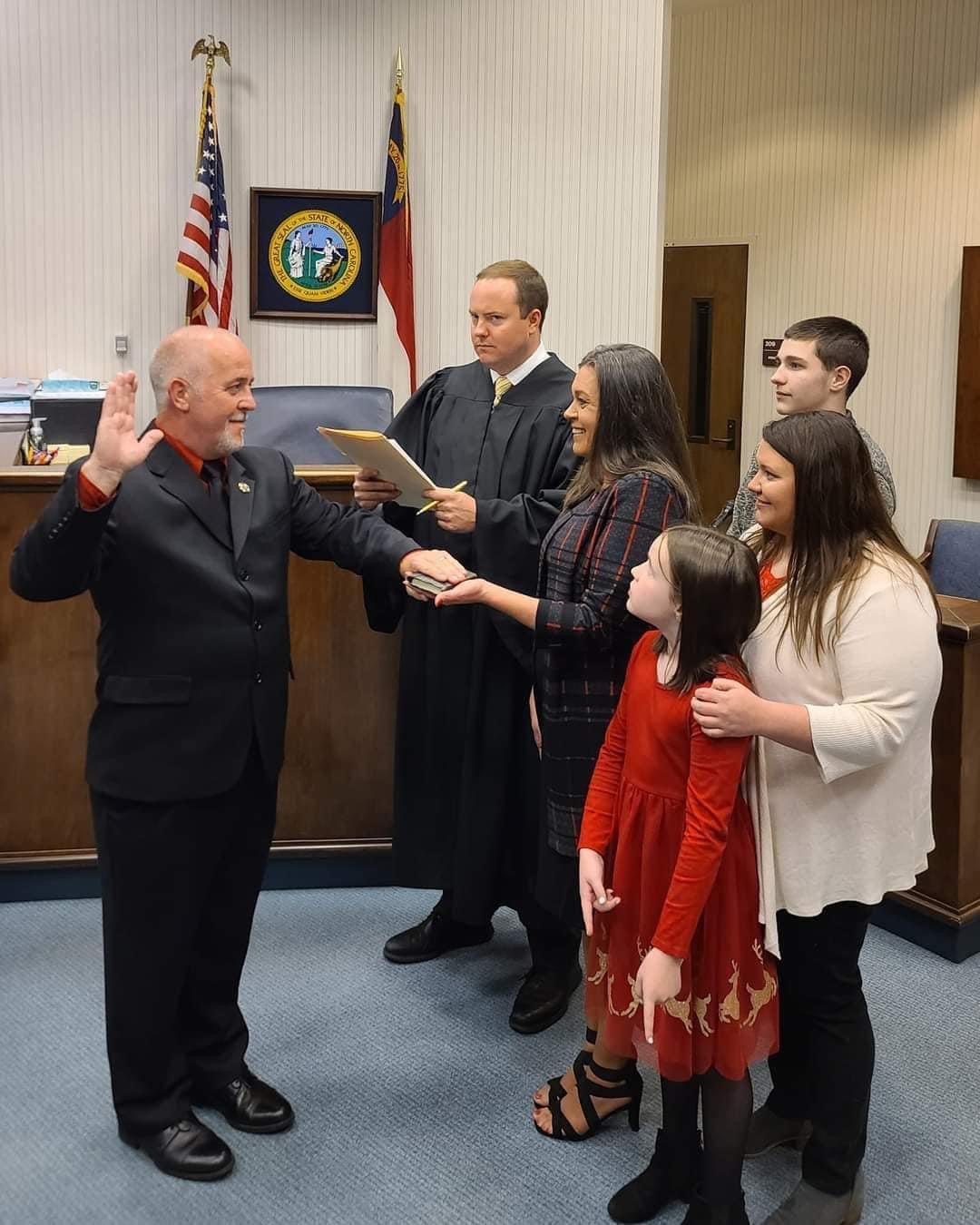 When newly elected Sheriff Doug Farmer took office on December 5, Jackson County not only got an entirely new Sheriff, but for the first time in over two decades and two different administrations, the sheriff’s office command staff is comprised of new employees.

For Major Shannon Queen, who has served as a top ranking officer for the Jackson County Sheriff’s office for 26 years, when he did not receive a letter, despite originally being told he would have a job within the agency, that meant on December 5, 26 years to the day he took his first Oath of Office with the Jackson County Sheriff’s Office, his career with the agency was over without any explanation. In his capacity as Major, Queen, who held the position under both former Sheriffs Jimmy Ashe and Chip Hall was third in command for the agency and was responsible for assisting the Sheriff and the Chief Deputy in planning, administering and coordinating the activities of the office, and oversees the daily operations of the Sheriff’s Office. Major Queen was responsible for supervising and evaluating all staff (excluding the Chief Deputy) in matters including patrol operations, investigative operations, civil process, detention, and administrative divisions of the Sheriff’s Office.

Major Queen was one of several longtime employees who were not invited to join Sheriff Farmer’s Administration. Matthew Wike, who served as second in command under former Sheriff Chip Hall as Chief Deputy, was not invited to join Sheriff Farmer’s Administration. Jessica Beasley, who has worked for the Jackson County Sheriff’s Office for the last 18 years, most recently in courthouse security, also did not receive a letter inviting her to take her Oath of Office under Sheriff Farmer. Retired North Carolina Highway Patrol Trooper Sammy Bowers, who worked alongside Beasley in Courthouse Security, was also not invited to take his Oath of Office.

Patrol Sergeant Brandon Hooper, who had 18 years with the Jackson County Sheriff’s Office did not receive a letter inviting him to take his Oath of Office under Sheriff Farmer.

Administrative assistant Terrie Sanford was also not asked to return.

Rick Buchanan and retired North Carolina State Highway Patrol Trooper Derek Robinson were forced to file retirement paperwork that was effective on December 1, 2022 since they were not invited to join Sheriff Farmer’s administration.

In addition to not offering continued employment to some of the longest serving officers within he Jackson County Sheriff’s Office, Sheriff Farmer reorganized existing employees, many of whom received significant demotions, which comes with pay decreases right before the holidays.

Detective Daniel Peoples was demoted and reassigned as a School Resource Officer which would have meant a significant salary decrease. With no training as a School Resource Officer and a day’s notice to respond to a school, Peoples felt it would be irresponsible for him to take a position he is not trained for and has no experience in, so he submitted his resignation to the agency. Detective Jason Ashe was also demoted from Detective to patrol deputy. Peoples and Ashe were assigned to the Person Crimes Division, meaning with their reassignment and resignations, dozens of cases involving numerous victims, specifically child victims, are now in limbo.

Other demotions/reassignments included John Beegle Jr., who was a Lieutenant in the agency’s investigation unit to a regular Detective. Beegle is a few months shy of retirement and will now retire as a Detective rather than with the rank of Lieutenant he earned over his career. Detective Ryan Brooks was reassigned to serve as a patrol deputy. While Beegle currently remains employed with the Jackson County Sheriff’s Office, Brooks resigned from his position.

According to Sheriff Farmer’s current organizational chart, Kenneth Woodring, who has worked for the Jackson County Sheriff’s Office for 23 years, was reassigned from Sergeant with the School Resource Officers to working the front desk at the Sheriff’s Office, however, according to Woodring’s wife, Woodring is still serving as an SRO Sergeant for Jackson County Community Schools and will remain in that capacity until his retirement on December 31 of this year.

*Editor’s Note: Since publishing this article we have also learned that Avery Brown was demoted from Patrol Sergeant to courthouse deputy and Sergeant Johnny Hollifield served as the county’s DARE Educator for over two decades was demoted to a School Resource Officer, losing his rank of Sergeant.

Curtis Lambert was hired to serve as Captain over SROS/Training/Operations. Lambert was working at the Swain County Sheriff’s Office working courthouse security prior to his new role in Jackson County. Lambert ran for Sheriff in 2014 but lost his bid to former Sheriff Chip Hall.

At the time he attempted to run for office, Lambert was working for the Sylva Police Department, however in March 2014 he was fired from the town of Sylva for performance issues. Lambert filed a suit against the town of Sylva following his termination and in 2018 a Jackson County Superior Court rejected Lambert’s lawsuit finding the town of Sylva has cause for Lambert’s termination. According to the lawsuit, while there were several instances of performance issues leading up to Lambert’s termination, Sylva Town Manager Paige Dowling said the “final straw” was what came to be referred to in the courtroom during the lawsuit proceedings as the “P.J.’s incident.”

Lambert acknowledged that in early February 2014, he spent up to three on-duty hours watching the movie “Legion” at P.J.’s Fast Food Mart, an all-night Sylva convenience store on Asheville Highway, leaving his patrol car idling outside.

During the trial, while Lambert was claiming he was fired due to political reasons due to his candidacy for election as Sheriff, witnesses testified that Doug Farmer, who was a sergeant at the Sylva Police Department at the time, was also running for Sheriff, however on the Democratic ticket, and he was not fired. Farmer also lost his bid in the Democratic primary for Sheriff in 2014, however while union as a Republican this year, Farmer was successful.

Sheriff Farmer promoted Scottie Holder to serve as Captain over Patrol/Investigations. Holder, who has worked for nearly all law enforcement agencies in Western North Carolina was working for the Jackson County Sheriff’s Office on patrol at the time of his promotion to Captain. Holder’s promotion came at the demotion of Patrick McCoy, who was demoted from Captain to Lieutenant.

Sheriff Farmer’s new administration also includes Bill Waldroup who was hired as Captain of Civil Process/Court. Waldroup has also worked for several law enforcement agencies across Western North Carolina. In 2014 Waldroup was working as a School Resource Officer in Swain County when he was removed from working as a deputy.

Waldroup was driving bus 49 for West Elementary School in Swain County when he told the students on the bus that if they did not sit down and be quiet that “he would have to shoot them.” While the incident was reported that Waldroup said it in a “joking manner” a review of the incident resulted in Waldroup’s being removed as a deputy, however he was not terminated from the Swain County Sheriff’s Office.

Around the same time Waldroup was fired from the Swain County Sheriff’s Office for threatening to shoot students, Waldroup was violated by the North Carolina Sheriff’s Education and Training Standards Commission for obtaining/attempting to obtain property by false pretenses within the meaning of N.C. Gen. Stat. § 14-100, a felony, evidencing a lack of the good moral character that is required of sworn justice officers, which resulted in the denial of Waldroup’s application to the Sheriff’s Commission for a justice officer certification.

According to court records, Waldroup was denied certification from Sheriff’s Standards when he applied on Feb 22, 2014. At the time, Waldroup was working for the Swain County Sheriff’s Office as detention officer. Waldroup’s denial for certification came from an incident that occurred on March 19, 2013 when Waldroup was serving in his eight year as a School resource officer with the Cherokee County School System Police Department. According to court records, Waldroup attempted to purchase items from Lowes Home Improvement in Murphy, while in uniform, for personal use. Despite the items being for personal use, Waldroup falsely claimed the items were for the school system and asked for a discount to purchase the items.

While there was evidence to support Waldroup had in fact made false representations of subsisting facts to employees of Lowes Home Improvement of Murphy which were calculated to, and did in fact deceive them, in an attempt to obtain something of value; and, that these acts constituted a violation of N.C. Gen. Stat. § 14-100, a felony, Lowes did not seek criminal charges against Waldroup, as that was Lowes’ position in other incidents he regarded as theft as well, which resulted in the Murphy Police Department to close the investigation. Waldroup appealed the denial of his certification and while the courts ruled he was rightfully denied certification as a detention officer, the Commission used their discretion to issue a term of probation in lieu of denial. However, as a result of the incident, Waldroup resigned from his position in Cherokee County, at which point he began his employment with the Swain County Sheriff’s Office.

Although the incident on the school bus resulted in Waldroup being removed as a School Resource Officer/deputy, Waldroup has remained employed in Swain County within the sheriff’s office’s civil process unit.

*Editor’s note: Daniel Peoples is the brother-in-law of Brittney Lofthouse, owner of The Southern Scoop News.