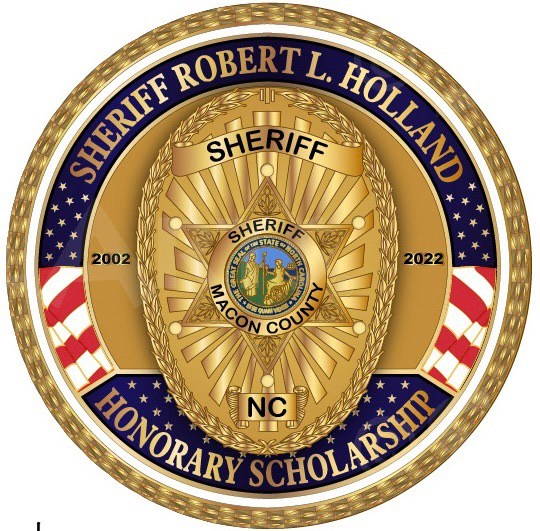 When long-time Sheriff Robert Holland retired after 30 years of law enforcement service in Macon County, 20 of which he spent as Sheriff, his family and friends wanted to gift him with something that help continue his legacy. A brainchild of his wife Marci, the Sheriff Robert L. Holland Honorary Scholarship was created.

“I couldn’t be happier about the amount of support that was offered for the establishment of the scholarship,” said Marci Holland “I knew that the presentation of the scholarship at Robby‘s retirement reception would be a highlight to the day and how much it would mean to him. Robby has a true servant’s heart and, throughout his career, has always sought to make a positive difference in Macon County and beyond. I can think of no better way to honor his legacy of service than through this scholarship that will continue to give, that will continue to invest in our young people, and that will continue making a difference. I am incredibly thankful to the group of people who came together to serve on the scholarship committee. Without them, none of it would have been possible.”

The Scholarship Committee that was formed will review each application received and will determine the amount of each scholarship and the manner in which each scholarship will be paid. The committee members are Jim Tate (former chairman of the Macon county board of commissioners), Pam Owens (teacher, Macon County Schools) Walt and Barbara Beck (retired, Tallahassee Police Department), Greg Rogers (School Resource Officer – Macon County Sheriff’s Office & Pastor of Pine Grove Baptist Church) and Ken Lane (retired, Major – Macon County Sheriff’s Office.)

“It’s extremely humbling to know that this scholarship was created in honor of my service and in an effort to help some young person to attend the college of their choice,” said Retired Macon County Sheriff Robert Holland. “It’s exciting to know our family will get to be a part of helping students from our area to be able to go chase their dreams and to do their part to help make a difference for others.”

According to Marci, the scholarship, which was a surprise to Sheriff Holland and announced during his retirement reception, was originally anticipated to be a small amount of $500-$1,000 per year. After the scholarship was announced, donations from friends and family to honor Sheriff Holland’s career began pouring in, giving the Scholarship Committee an opportunity to award several larger scholarships.

To apply, eligible students must submit an essay, three letters of reference highlighting their community service, and a copy of their high school transcript.

In the spirit of Sheriff Holland’s commitment to protecting and serving, the scholarship will be awarded to students who have demonstrated outstanding citizenship and service to the community. The scholarship is reserved for any student (public, private, or homeschooled) in Macon County who are seeking a career in criminal justice or a related field.

Completed application forms should be submitted to school counselors no later than March 15 with scholarships being presented at their respective school award ceremonies.

If anyone would like to mail in donations to the scholarship, checks can be made payable to Franklin High School and sent to: