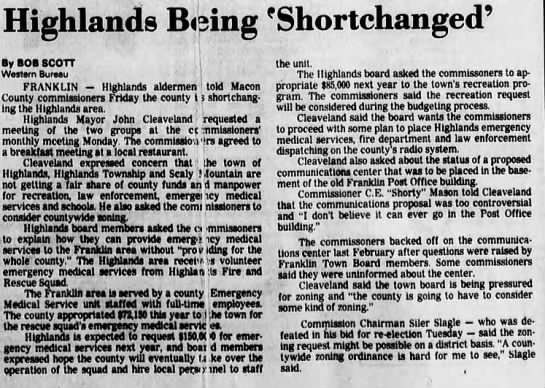 November election could mean shift in representation for Highlands residents

Dating back to the 1970s, the Macon County Board of Commissioner District I seat has been held by someone residing within the town of Highlands. Although District 1 consists of the precincts of Elijay, Flats, Highlands, and Sugarfork, all records available within Macon County show that since 1986, voters have elected a Highlands resident to the seat…so much so, that the seat is commonly referred to as the Highlands District.

With the town of Highlands accounting for more than half of the county’s overall property tax revenue — meaning the property values in Highlands generate more revenue than the rest of Macon County combined, past representatives who have held the seat, such as Current Board of Commission Chair and outgoing commissioner Jim Tate, have spoken to the importance of ensuring the residents of Highlands maintain representation on the Board of Commissioners.

For the first time since 1986, the seat, which comes up for election every four years, could potentially be held by a candidate within District I, but outside of the Highlands city limits.

Prior to 1978, the Macon County Board of Commissioners was comprised of three seats— as outlying areas such as Nantahala and Highlands grew, the board voted in 1977 to transition to a 5-person board during the 1978 election. The first election held featuring District I was won by Milles Gregory. Gregory was elected to District 1 and lived within the newly established District but lived closer to Franklin than Highlands.

In April 1984 the then Highlands Mayor, John Cleveland, requested a meeting with the new 5-member Board of Commissioners to address concerns of a lack of representation for Highlands residents. Cleveland, supported by a unanimous Highlands Town Board, urged commissioners to reconsider how the 5 member board is elected. While candidates for District 1 must reside within the boundaries of the district, Macon County residents at large elect the position. The 1984 board of commissioners tabled the discussion and in the nearly 40 years since that same request has been made a dozen times, however, the election method has never changed.

Neville Bryson was the first Highlands resident to be elected to District 1 and was elected in 1986. Bryson served until 1994 when William Fred Munger was elected. Munger resided in Highlands. Munger decided to seek election for Macon County Register of Deeds in 1998, leaving the seat open for Allan Bryson of Highlands to be elected. Allan Bryson retained the seat until 2006 when he was defeated by Highlands resident Brian McClellan. McClellan later resigned from the Macon County Board of Commissioners and Highlands resident Jim Tate was appointed to replace him. Tate has held the seat ever since, however, he will be retiring from the board in November.

Both Republican candidates on the Primary Ballot for the May 17 election, Don Willis and John Shearl, currently reside in District I, but not within Highlands. At a public forum held at the Macon County Public Library last week, all candidates running for commissioner were asked how they would ensure the residents of Highlands received the same representation as they have in the past if the candidate to be elected to the board lived outside of the city limits.

“The citizens of Highlands can rest assured that they will get the same representation from me that I will give the folks over on Nantahala, Franklin, Cowee… it doesn’t matter,” said Candidate Don Willis who lives in the Elijay Community. “We are all one county, folks. We need to represent all the people not just a slim majority or just the town of Highlands.”

According to Shearl, he has been involved with the town of Highlands since the 1980s.

“I have been in the town of Highlands since 1986. My wife is a native Highlander. The Munger Family was the third family to ever settle in Highlands. I met my sweetheart in 1983, we got married in 1986 and we built our house in Highlands we had three sons that graduated from Highlands School. I am a retired Highlands firefighter, and Highlands little league representative. I was the recipient of a Highlands School Citizen award put on by faculty and staff,” said Shearl who currently lives in the Sugarfork Community. “I am there every day. That is where my landscaping company is. My connections are extensive in Highlands and those people know where I will be every day.”

With the possibility of the District I representative not residing in Highlands, candidates currently seeking the Republican nomination for District II also shared their insight as to how they would ensure Highlands representatives were adequately represented.

“I will represent all communities in Macon County, no matter if it stretches from Nantahala to Highlands, or wherever.” said Candidate Gregg Jones. “I am willing to put my boots on and make sure stuff gets done. I would like to see the communities come together and work together.”

Gary Shields, the only incumbent running for election noted that the various districts are important to ensure fair representation.

“We have three districts in Macon County, Districts 1, 2, and 3. I have always thought of myself as a Maconian first, but Districts have the responsibility to find who they want to come up and be their representative,” said Shields. “I think a quality candidate for District I needs to come out of the leadership of District I. The District I person [candidate] is going to have to answer to District I people. Very seldom will Gary Shields go to Highlands and answer questions about District I. Their representative, that is who they need to get.”

Danny Reitmeier noted that while the board is comprised of various districts, commissioners are voted by all residents in Macon County and their work should reflect such.

“We are elected by our districts because of where we live, but we are responsible for all the citizens of Macon County,” said Reitmeier. “You may not be able to get a hold of that one or the person over your district, and while we may not be the “responsible” person, we have to be there for everybody. I have a long history of connections to Highlands through work, being involved in our community through youth sports… twenty years of my life was up there on that mountain.”

Candidate Richard Lightner noted that his experience as the county Tax Administrator afforded him the opportunity to serve residents of Highlands frequently.

“I am the only the only one [candidate] that has answered to every district in the county…” said Richard Lightner, who retired from a career serving residents of Macon County as the County Tax Administrator. “…When I worked in the tax office there were no districts. Most of my questions came from the town of Highlands and the Highlands District. Nantahala was also a big one with all the houses along the lake. So I didn’t have the privilege of districts and that is the way your commissioners operate. You have five commissioners that are elected in districts, once you are elected you represent the people of Macon County. You represent their needs. You represent what they want and you try to fulfill it.”

Candidate Danny Antoine was unable to attend the public forum but is also running for the District II seat. He said that regardless of the district he is elected to represent, he believes Macon County should come together as a whole and said that he thinks all of the candidates running for election have the same viewpoint… that the position of commissioner is to serve all citizens.

The District I seat on the Macon County Board of Commissioners would have been final after the results of the May 17 primary since only two Republicans filed for the primary election, however, Highlands resident Jerry Moore was able to successfully secure the 1,111 signatures required to appear on the November ballot as an unaffiliated candidate. Because Moore was able to secure the required signatures to appear on the November ballot, there is a possibility that comes November, the District I representative will reside within the Highlands City limits if Moore wins the General Election. If not — either Shearl or Willis will become the first person in nearly 40 years to represent District I from one of the other precincts rather than the town of Highlands.