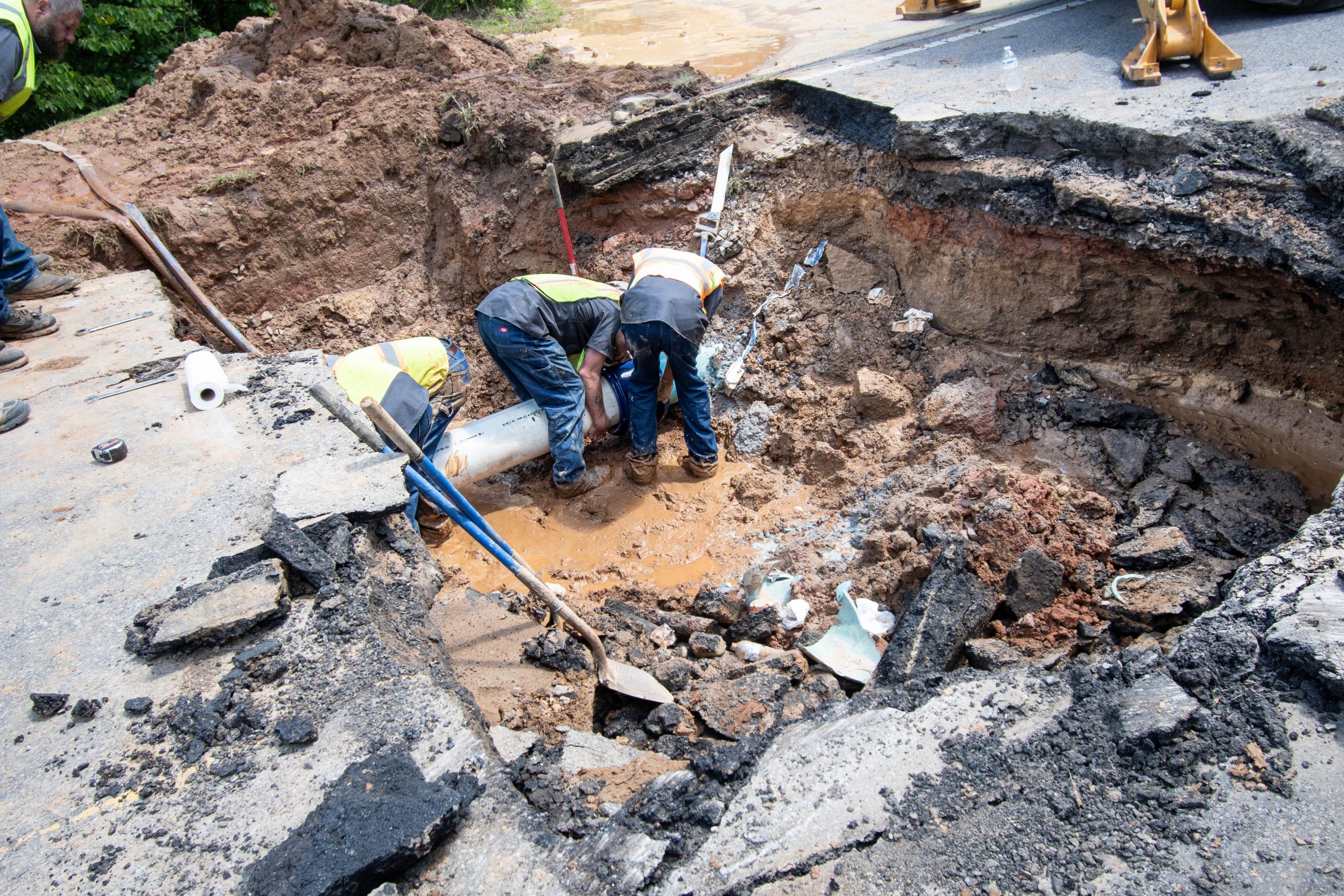 Just before lunch on Friday, crews installing Access Underground Services on behalf of Vyve Broadband in downtown Franklin penetrated a waterline serving downtown businesses causing a massive rupture. The primary contractor on the fiber installation project is Ervin Cable Construction Company and the subcontractor is Axis Underground. Water supply to businesses was immediately cut off in an attempt to control the leak which resulted in the loss of 200,000 gallons of water.

“The estimated cost to the town including staff salaries, equipment, materials to repair the break in the line and the water itself was $246,000,” said Franklin Town Manager Amie Owens. “We are working with the contractor and the insurance company to determine what next steps are related to recoupment of costs.”

The $246,000 estimation provided by Owens address the cost the town of Franklin incurred, however the total loss due the Vyve Broadband’s project error would be considerably more.

“The NCDOT also had to come and repair the road where the breach occurred and their costs are not included in the estimate as they will have their own claim,” Owens explained.

The maintenance crew responded to repair the roadway, which had been undermined due to large amounts of water erupting from the busted pipe. The excavated area was approximately 12’ x 16’ and needed to have saturated subgrade removed and stone replaced. A patch was then placed over the excavation for weekend travel.

“NCDOT road oil crew came in on Monday to place a leveling course of surface mix asphalt to smooth the roadway to its original condition,” said McCourt. “The approximate cost for both days of the NCDOT work, equipment, and materials is about $13,500. We are still waiting on the remaining invoices to come in to accurately pass along the cost to the contractor.”

Franklin Fire and Rescue also provided traffic control in the area while waiting for Toccoa Natural Gas to arrive on scene to address the gas line that was also cut during the incident. As of press time, an estimated cost of damages for the gas line was not yet available.

In addition to the town and the NCDOT & Toccoa Gas, businesses were forced to close, many restaurants closed their doors during lunch hours.

According to Nancy Lindell, Division Director of Public and Media Relations for HCA Healthcare, the water supply at Angel Medical Center was disrupted, however the facility’s emergency response plan for such an incident was deployed, causing no disruption of services during the water outage. The Franklin Fire Department, with the assistance of Squad 4, responded to Angel Medical Center during the outage to fill the air conditioning cooling towers while the hospital’s connection to the town’s water supply was cut off.

Vyve Broadband is in the process of expanding to the Franklin area and are currently already operating in Sapphire, Highlands, and Cashiers.

For the fiber installation project, Vyve Broadband or the contractors or subcontractors completing work for them were not required to obtain any permits from the state, county or town. The company secured an encroachment permit to install the fiber in the right of way of state-maintained roads, but beyond that, there was no additional oversight.

Ideally, the crews installing the fiber would utilize the 811 “know before you dig” national service hotline. The hotline is designed to provide anyone who is digging with the approximate location of buried utilities to avoid someone unintentionally dig into an underground utility line. Despite confirmation from both the NCDOT and the town of Franklin regarding the company responsible for the project, as of press time*, the only response from Vyve Broadband regarding the situation was, “We will forward this to our field team to verify if we were in the area. We do not provide service in franklin, once we have additional information we will reach out to you.”

**If you find value in the work of The Southern Scoop News and want to see it continue, please consider a small donation to our online Patreon account. As of today, 19 individuals contribute monthly for a total of $118 which helps to ensure we continue providing you with these types of updates. To donate, click here.