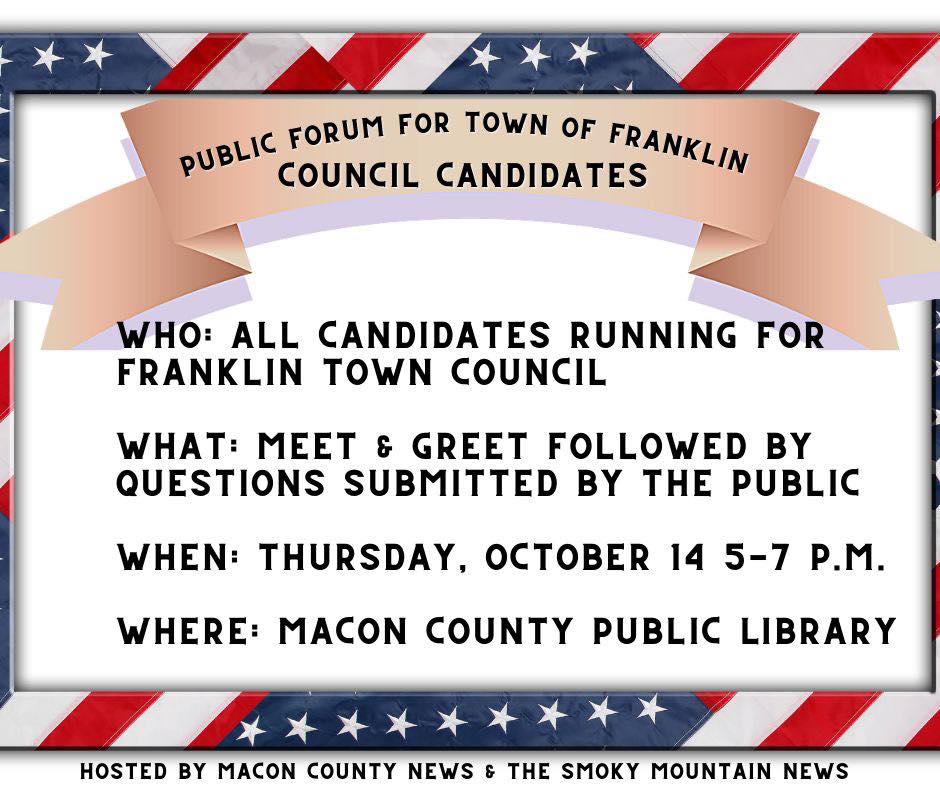 One-stop voting for both the Highlands and Franklin Municipal Elections begins tomorrow, October 14, and will run until Friday, October 30. Residents that live within the Franklin or Highlands city limits will be able to cast their votes during the early voting period or on Election Day scheduled for November 2.

We are teaming up with The Macon County News and The Smoky Mountain News to host a public forum and meet and greet for all of the Franklin Town Council Candidates on Thursday, October 14 from 5 p.m. to 7 p.m. at the Macon County Public Library. There will be a meet and greet beginning at 5, followed by a question and answer forum with questions submitted by the public for each candidate.

For those unable to attend the event in person, Macon Media will be live streaming the event and will also post a video on Facebook following the event.

In Franklin, the office of the mayor and three council members will appear on the ballot. The seats up for election include the mayor seat — currently held by Mayor Bob Scott; and town council seats held by David Culpepper, Dinah Mashburn, and the seat left vacant after the untimely death of Barbara McRae. Neither Scott nor Mashburn are seeking re-election. The Franklin Mayor seat is already decided as current Council Member Jack Horton was the only person to file for the seat.

With Horton assuming the position of Mayor after the November 2 election, there will be a total of four council members seats up for grabs — however, only three will technically be decided by the election. The top three vote-getters in the Franklin election will secure the three seats on the ballot, and while the fourth seat could go to the fourth top vote-getter, that seat will ultimately be filled by the Franklin Town Council. It will be up to the board members appointed after the November election to fill the fourth vacancy.