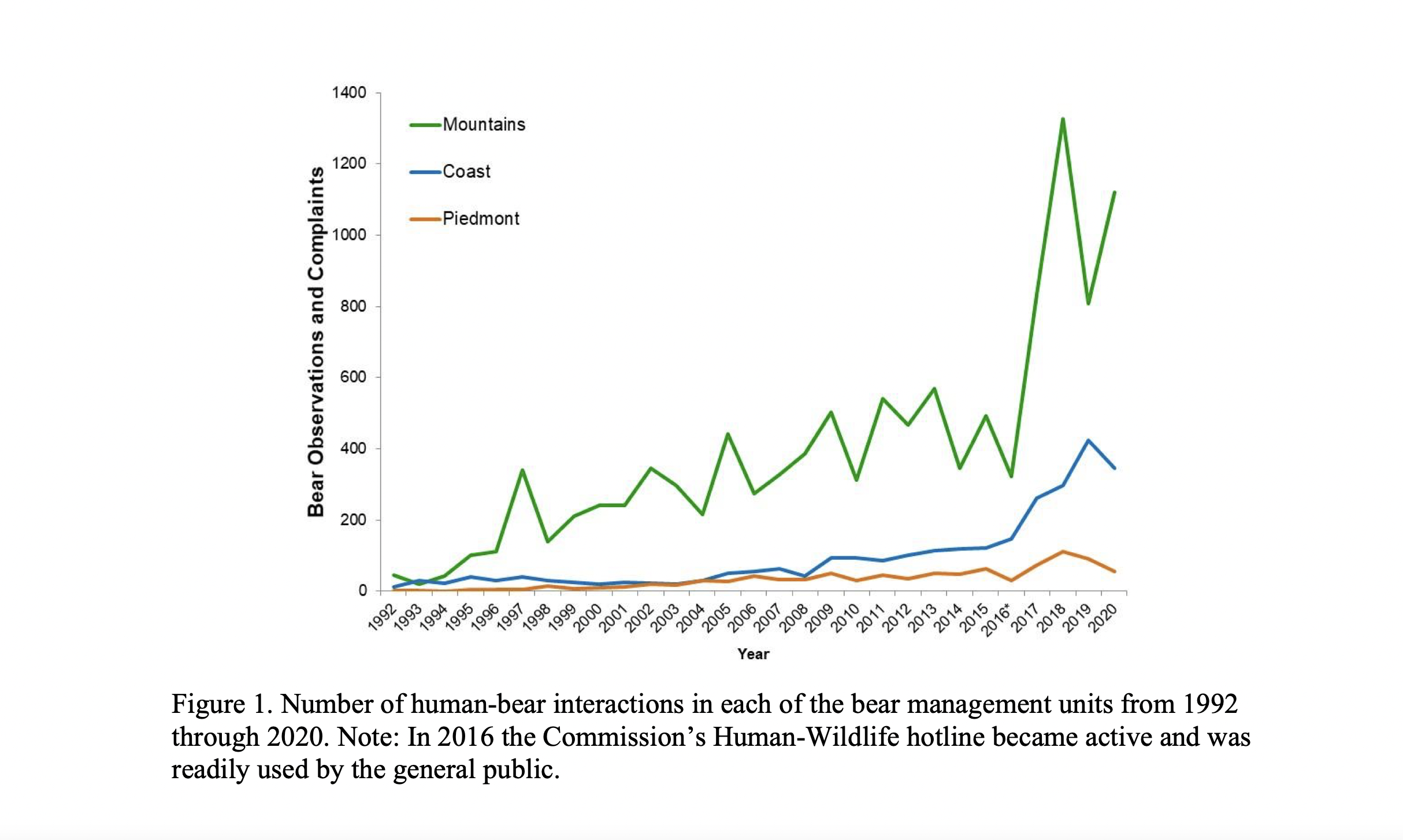 The North Carolina Wildlife Resources Commission has proposed a rule change that would allow bear hunting by permit in the Pantertown-Bonas Defeat Bear Sanctuary.

The N.C. Wildlife Resources Commission (NCWRC) has the authority, granted by the Legislature, to create regulations called “rules” which although not state law, have the force of law.

NCWRC estimates that if the current rules are changed, 521 permits would be issued for the sanctuary in 2022 at a cost of $8 each. In August 2018, the Nantahala Ranger District formally requested that the Commission allow permit bear hunting on Panthertown Bear Sanctuary due to the increase and severity of bear conflicts. This is part of an integrative management approach in which regulated hunting and food storage would be implemented to manage bear populations and bear conflicts.

The proposal to open permit hunt opportunities on three of the Bear Sanctuaries in the Mountain Bear Management Unit (MBMU) meets several objectives in the 2012 – 2022 Black Bear Management Plan, including the use of regulated hunting to manage the bear population. This proposal also meets the objective of bear sanctuaries. The proposal may also assist in addressing local human-bear conflicts by locally managing bear densities, removing problem bears, and reversing human-conditioned behavior being observed in local bears.

In 1971, the Commission established 28 black bear sanctuaries totaling over 800,000 acres. North Carolina was among the first states to establish such a system of protected areas. The original objective of the bear sanctuary system was to protect a breeding nucleus of female bears and to produce a dispersing surplus of bears that could be harvested without detriment to the population.

Currently, there are approximately 490,000 acres of designated bear sanctuaries in North Carolina. North Carolina remains one of the only states that still has a system of designated sanctuaries. With the decrease in huntable areas, the recovery and restoration of the bear population, the increase in human-bear interactions, and the severity of these interactions (e.g., breaking into occupied homes), the Black Bear Management Plan objective of the bear sanctuaries is as follows:

“Bear Sanctuaries are delineated areas where hunting mortality can be adjusted independently from that of the surrounding area to address local bear densities and to meet population goals for BMUs. Adjustment of mortality is achieved by regulating harvest pressure, which can range from no hunting to a hunting season consistent with that of the local bear season.”

Two of the state’s bear sanctuaries, Daniel Boone Bear Sanctuary and Mt. Mitchell Bear Sanctuary both have permit hunt opportunities and have done so since 2009 and 2066 respectively.

The three bear sanctuaries in the proposal would not be completely opened up to bear hunting. A permit will be required, as is required on Daniel Boone and Mt. Mitchell. Commission staff will determine the number of permits available, a number of hunting days and maximum party size for these permit hunts on a site-by-site basis.

Public comments will be accepted through January 31.

NCWRC Commissioners will be considering the proposed rule changes during their February 2022 meeting. If adopted, the new rules would take effect August 1 and be in place for the 2022-202 seasons.