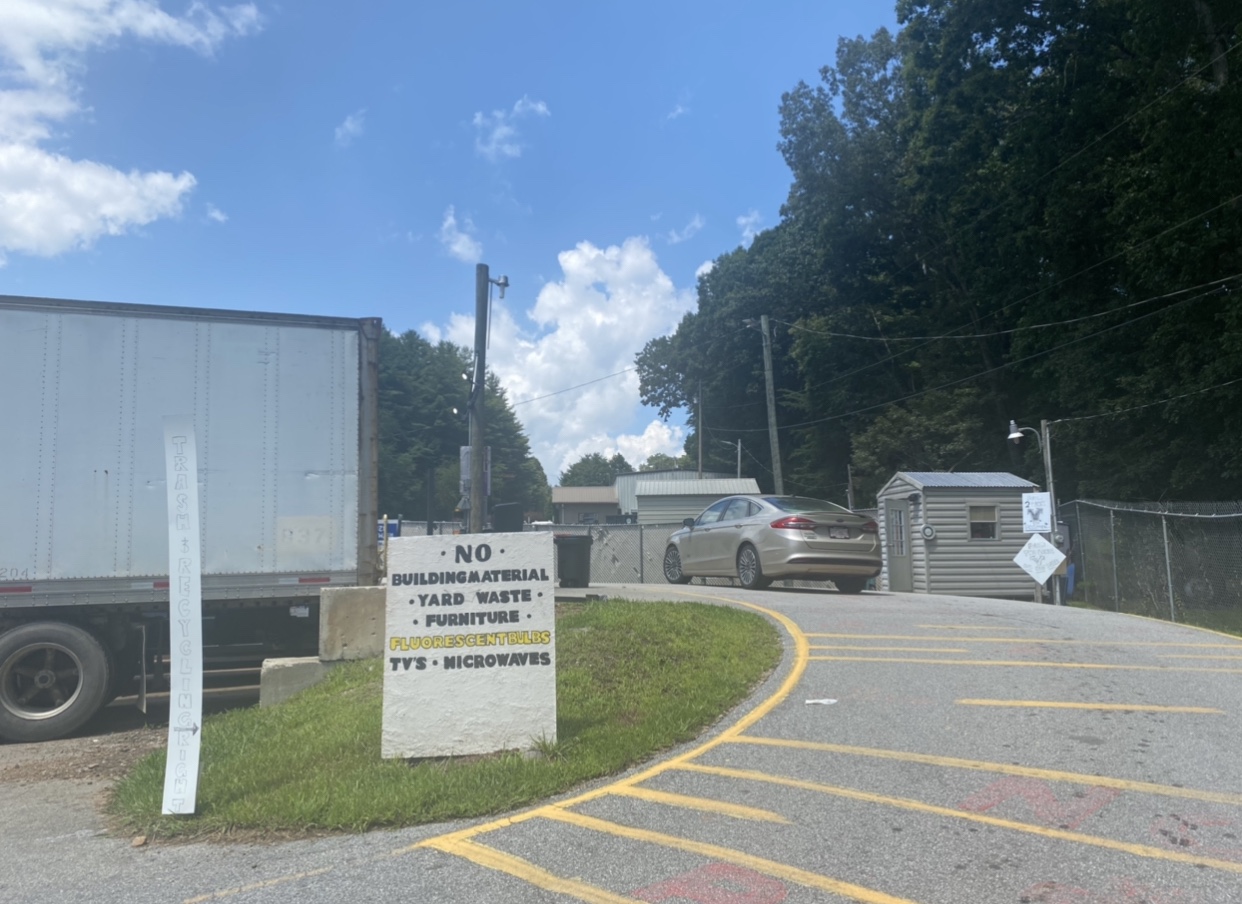 Macon County recycling centers are flooded with trash in the summer months and on any given day most centers see constant traffic. Last Sunday, out of the five or so cars lined up to dump trash at the Highlands Road center, only one car had North Carolina tags with others from Georgia, Florida, and even Texas. Being a tourist destination, while the convivence centers are funded out of local taxes, a lot of what they take in is from tourists.

“We do, of course, see an increase in waste volume during the summer months, due largely to summer-only residents and tourism,” said Stahl. “We are currently seeing a large increase in volume due to the “Covid cleanup.”  With folks staying closer to home, apparently many have decided it is time to spruce up the place.  April-July have all seen record amounts of waste brought to the centers and landfill, with as much as a 20% increase over historic trends.” 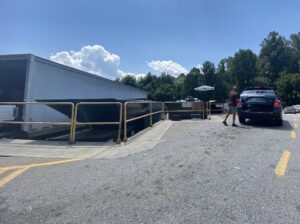 The county has had many discussions and looked at different methods of addressing wastes leaking into the County.

“The nature of our population makes an effective plan very difficult,” said Stahl. “Our summer only population is probably over 50,000 taxpaying residents; as opposed to around 34,000 year-round residents.  Most of these folks have out-of-state tags, but also free access to the centers.  Many years ago, an attendant at the Otto Center decided, on their own, to not let out-of-state tags use the center.  When I started getting complaints and looked into what was happening, all the people turned away were, in fact, part-time residents with second homes in Macon County.”

Stahl said it’s a difficult formula to determine who should and shouldn’t be allowed to use the centers.

“Some counties have addressed this with a “card” or “sticker” system,” said Stahl. “This too would be challenging due to a large number of short-term summer rental properties, or I left it in the other car, etc. Our attendants are regularly confronted by users over existing usage rules such as filling one can at a time so they aren’t left on Saturday with four cans 80% full that can’t make it until Monday, or the difference between a #1 and a #2 plastic. I really don’t want to subject them to confrontations over refusal to throw a bag of household trash because were renting a cabin for the weekend.”

Stahl noted that preventing non-residents from using the centers would likely result in the trash being dumped somewhere it shouldn’t be.

“Not to mention, without somewhere to take the trash, it would probably wind up alongside the road somewhere, and we have too much of that already,” said Stahl. “Finally, most instances of actual infiltration occur near the GA line; and likely by a small number of repeat offenders; because we open the Otto Center on Sunday, while Rabun Centers are closed. By permit, we can not knowingly accept waste from outside Macon County, and I don’t like the idea of Maconians paying into our system while outsiders use centers for free. However, I honestly can’t imagine a scenario where infiltration was over 10-15 tons per year.”

The infiltration does cost taxpayers money each year, but Stahl said that cost is minimal.

“If we assumed 20 tons of infiltration; that equates to lost revenue of $1,320.00 in tipping fees,” said Stahl. “The cost of printing and mailing cards or stickers; the man-hours in tracking down proper users vs. offenders, or replacing lost cards, handling requests for duplicates (especially those short-term rentals); occupying deputies over disputes at centers; etc. would very likely be 100 times that loss.  Again, while I do not, and cannot, take a passive attitude towards wastes leaking into Macon County, I also don’t want to have to charge citizens $4-5 each to implement a program to stop a problem that is costing them pennies in lost revenue each year.”

“The primary difference with P-T permanent status is that the employee is enrolled in the County retirement system; and accrues vacation and sick leave proportional to hours worked vs. a full-time schedule,” said Stahl. “For example, a 20-hour per week employee would accrue at 50% that of a 40-hour per week employee. This also allows us to schedule attendants more than 19-hours per week, or 1000-hours per year; a requirement of the retirement system.”

While the transition was approved by the board earlier this year, Stahl said his department is still working out the logistics but hope to have it completed soon. Even though the county approved the change, it won’t apply to all employees as only attendants that are available and want to work at least 20-hours per week will qualify.

“As far as timing, I hope to have this change implemented as soon as possible,” said Stahl. “We are working through the scheduling at each site to staff the centers as efficiently as possible. This is pretty simple on 80-hour per week sites, but the 46-hour; 50-hour sites create more challenges. We also have to account for personnel that have specific limitations, either because of health or retirement, etc.; or those that simply don’t want to be changed to P-T permanent because of having to contribute into the retirement system. We have some employees that only work 6-hours per week, or are limited to 2 days per week, etc. Fitting them in the new system is adding a lot more pieces to the puzzle.”

Stahl plans to be ready for individual meetings with staff within the next week or two.