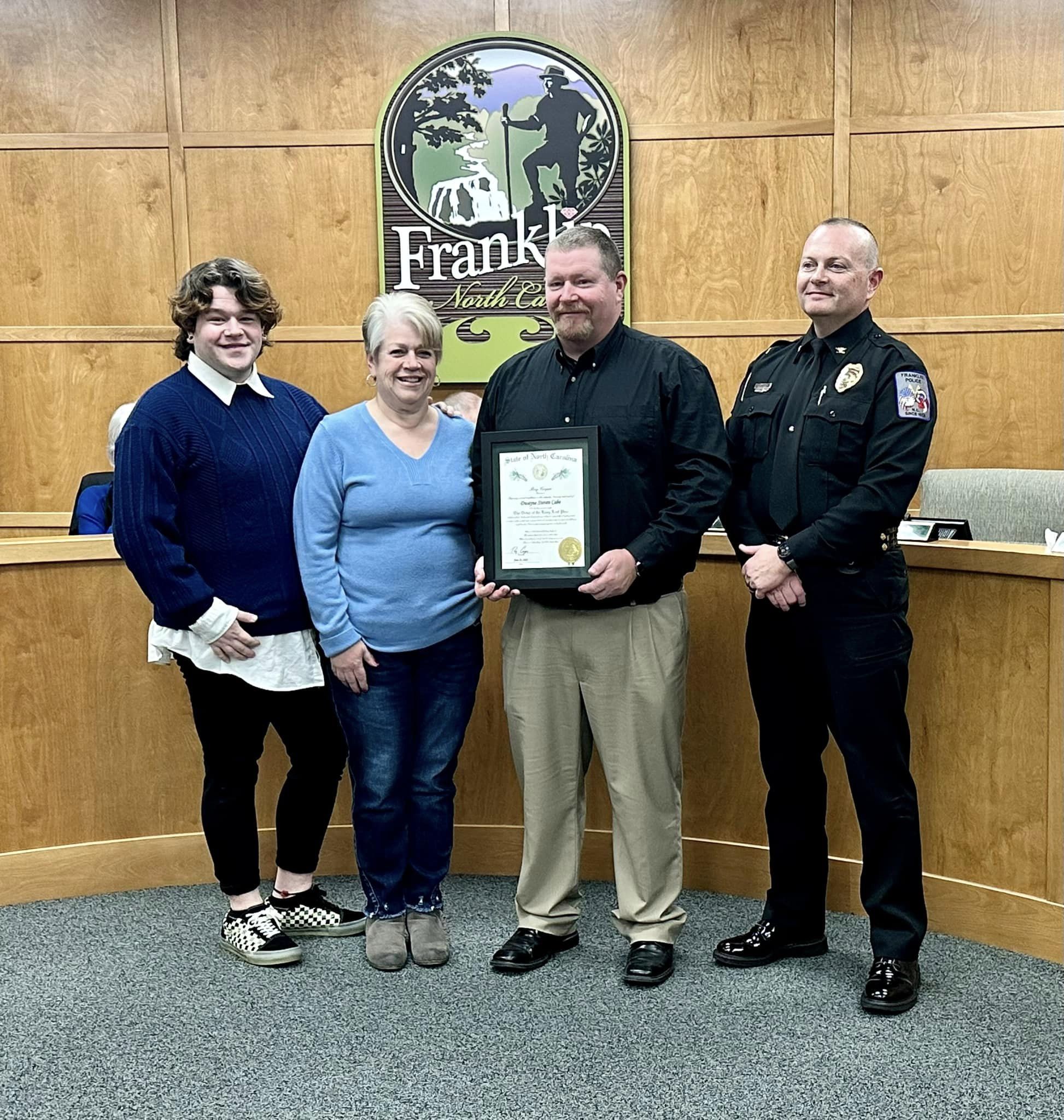 The Town of Franklin honored Retired Police Department Officer Dwayne Cabe Monday night by presenting him with the Order of the Long Leaf Pine, the state’s highest honor.

Cabe began his career in public service when he was 18 years old when he joined the Otto Volunteer Fire Department.  While learning about the fire service, Cabe was introduced to other areas of emergency services, which led him to enroll in classes for fire service and basic EMT certification. He soon was introduced to the first called agency in emergency services…the 911 call center.  Cabe retired from the fire service in 2012, with 24 years of service when he moved out of the Otto District.

“I applied for a part-time job at 911 and suddenly, things started falling into place,” said Cabe. “While working at 911, I was introduced to Terry W Bradley, who was a patrol sergeant with the Franklin Police Department. We developed a friendship that soon led to ride-alongs, and a mentorship. I decided that Law Enforcement, another facet of Emergency Services, was my calling.”

Cabe applied for a spot in the North Carolina Basic Law Enforcement Training class at Southwestern Community College, where he graduated as a certified law enforcement officers. After being certified, he continued to work at 911 which also working at the Highlands Police Department, both in a part-time capacity.

When a full-time position became available at Macon County 911, Cabe applied and was hired.

“I became a full-time employee with Macon County 911 in October 1993,” said Cabe. “I also continued to work part-time at Highlands Police Department.”

In 1998, Cabe applied to work part-time with Franklin Police Department and was hired by his mentor, Terry Bradley, who was the Chief of Police for Franklin at the time.

For the next 21 years, Cabe worked his way through the ranks at the Franklin Police Department while also striving to serve his community. Cabe has served on the board of directors for Habitat for Humanity and Macon County Youth Football.  He has been an active volunteer with the Veterans Association in countless ceremonies honoring our veterans. Cabe has participated in the North Carolina Fallen Officer program on a local and state level.

He has been certified in radar, intoximeter, worked as a car seat technician with Safe Kids Macon County as a certified car seat inspector, M.A.D.D., and participated in Hands Across the Border, which is a multi-state organization promoting safety and zero tolerance for driving impaired. Cabe has spent over 20 years volunteering with Shop With A Cop, which raises money all year long for children to be given funds to go Christmas shopping for themselves and their families.