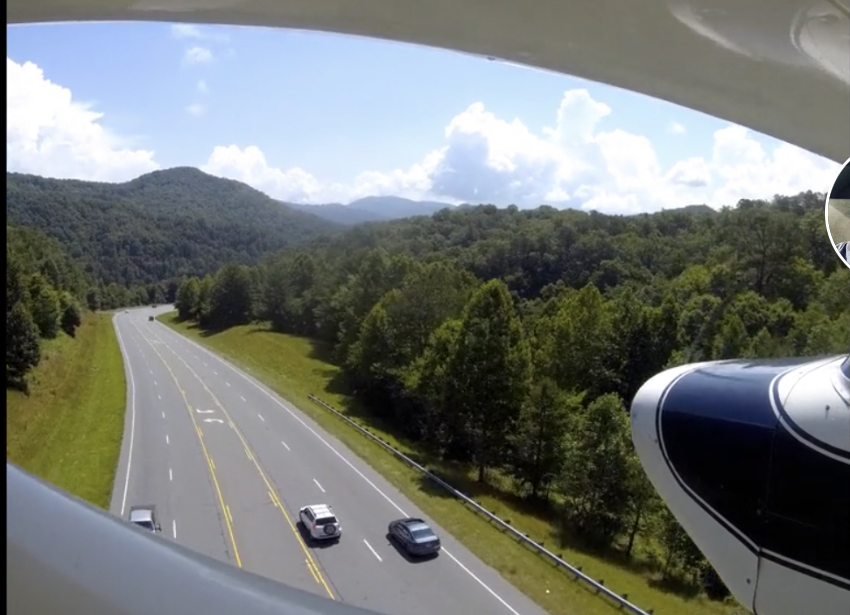 On July 6, the Swain County Sheriff’s Office posted a video of a plane having to land on the highway for an “emergency landing.” The video quickly went viral with the pilot, Vince Fraser from Florida, receiving accolades for his skills in maneuvering the plane onto a highway.

Fraser, a Florida pilot with less than 100 hours of experience under his belt, was flying an Aero Commander 100, a 1970s vintage plane. Fraser flies from Punta Gorda, Florida to Lake Wells, Florida, a 227-mile flight that would take around 2 hours. According to flight records, Fraser tops off in Lake Wells before heading to Toccoa, Georgia on July 2nd. Fraser was originally scheduled to fly into the Macon County Airport, however, his father-in-law was at the airport waiting for his arrival and contacted him to tell him that the weather wasn’t clear and cautioned Fraser against landing in Macon County due to the mountainous terrain and weather conditions.

On July 3, flight records show that Fraser takes off from the Toccoa airport and flies around the Fontana Dam area. The flight from Lake Wells, Florida to Toccoa, Georgia would have been around 230 miles. Prior to leaving the Toccoa airport on July 3, there are no records of Fraser purchasing fuel before taking off, flying over the Macon County airport, and around Swain County. 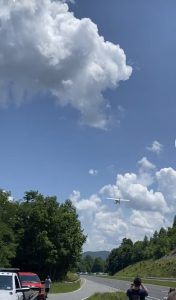 As Fraser circled Swain County, a 65-mile flight from Toccoa, he runs out of fuel and is forced to land along US 74 near the Sandlin Bridge. According to the Swain County Sheriff’s Facebook Page on July 3, “the pilot said the engine stalled and he had to set the plane down.”

On July 6, Sheriff Curtis Cochran again posted about the emergency landing, sharing videos of the landing from the ground and commending the pilot for the landing.

“We are thankful that no injuries occurred during this emergency landing and the plane is safely back in the air. Thanks for all the help from our partners in other agencies,” wrote Sheriff Cochran. “We have had plane crashes in Swain prior to this but I don’t remember an emergency landing ever happening. This pilot did an outstanding job not only landing safely on a busy 4 lane on a holiday weekend but he kept his composure and safely guided the plane off the 4 lane to a safe spot that did not interfere with traffic.  JOB WELL DONE BY ALL INVOLVED.”

A public records request was filed with Sheriff Cochran for documentation from his agency and their response to the incident was answered with an email stating, “The Highway Patrol worked this.”

Although Sheriff Cochran did not produce any public records regarding the county’s response to the landing and deferred to the highway patrol, Sheriff Cochran again posted on Facebook on July 7, this time including a video from Fraser’s go-pr video and again commending the landing for not causing any injuries while citing how dangerous it was.

“This is the view from the pilots go pro camera from the cockpit of the plane on the emergency landing on Hwy. 74 on Sunday, July 3, 2022,” wrote Sheriff Cochran. “What an OUTSTANDING job and no injuries. AMAZING  If you look closely at 0:20 you will see the power lines the pilot was able to avoid. There were so many things that could have been catastrophic but they didn’t happen.” 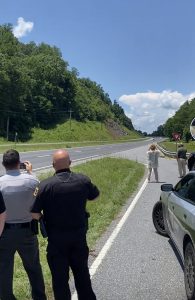 Fraser’s statement after the emergency landing stated he believed there was a clog in the aircraft and he was able to rectify it by cleaning out the fuel system. According to reports, he cleaned out filters and opened up valves on both tanks and it fixed the issue. Fraser noted one tank did not have fuel and there was fuel in the second tank, but a clog forced him to land.

On July 3, the highway patrol towed the plane to a safe stretch of highway, blocked the highway and allowed Fraser to take off from the highway and fly into Macon County. Maintenance reports after the emergency landing don’t mention any filter changes or other work on the plane other than refueling. Fuel calculations after the emergency landing and after it was refueled in Macon County equates to right about 40 gallons of fuel— right around the 44-gallon capacity for an Aero Commander Plane, indicating that the primary issue and cause of the emergency landing, was actually the rookie pilot’s failure to properly refuel the aircraft, causing him to run out fuel and complete the dangerous landing in Swain County.

A Freedom of Information Act request has been filed with the National Transportation Safety Board for additional information on the incident and subsequent investigation with the Federal Aviation Administration.