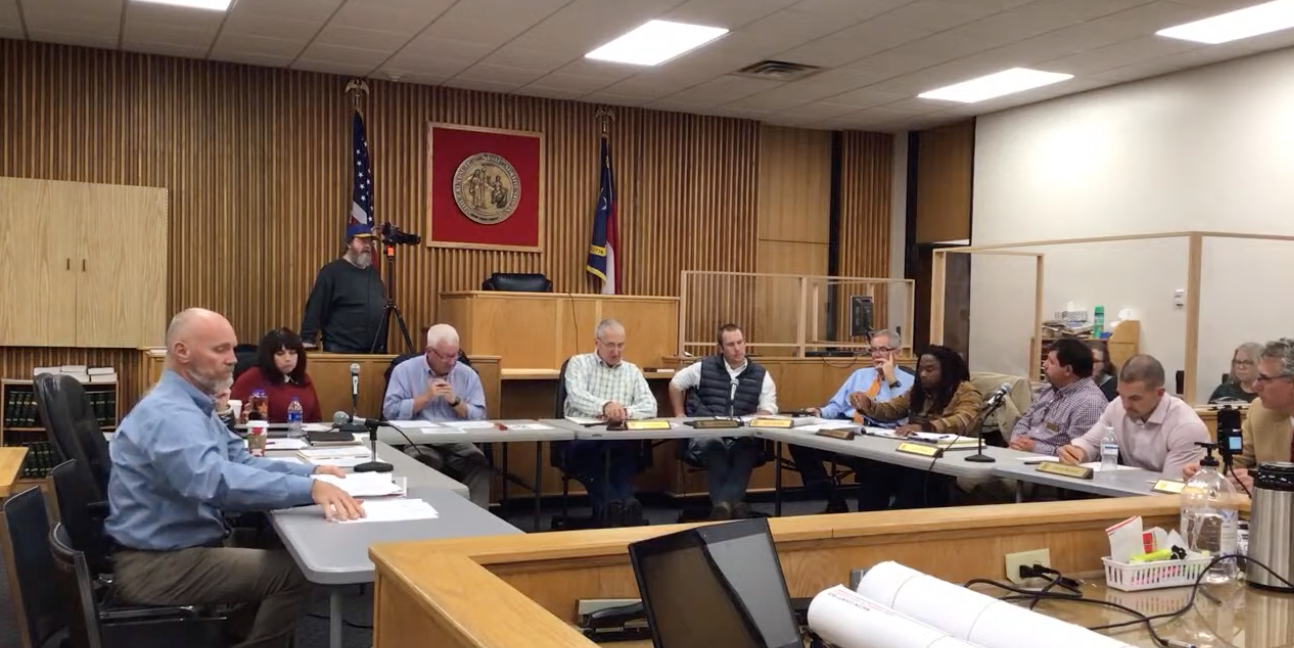 *This is one of several articles that will be written as a result of the December 19, 2022 joint meeting between Macon County Commissioners and Macon County Schools.*

According to North Carolina General Statute, it is the “duty of the local boards of education to make provisions for the public school term by providing adequate school buildings equipped with suitable school furniture and apparatus.” However, the same provision specifies that while the board of education has the duty to make provisions for the facilities, “the needs and the cost of those buildings, equipment, and apparatus, shall be presented each year when the school budget is submitted to the respective tax-levying authorities. The boards of commissioners shall be given a reasonable time to provide the funds which they, upon investigation, shall find to be necessary for providing their respective units with buildings suitably equipped, and it shall be the duty of the several boards of county commissioners to provide funds for the same.”

Because the two board are required by law to work together to provide public education, the Macon County Board of Commissioners and the Macon County Board of Education met for a joint session just before the Christmas holiday to discuss the future facility needs for the school system. With two new members on the school board and two new members on the commission, the new leadership called the meeting to get on the same page about ongoing projects, current needs, and future planning. The nearly four-hour-long meeting ended with no votes being able to be passed, however, the newly elected officials shared their visions for the future of Macon County Schools.

Macon County Manager Derek Roland updated the board on the Highlands Middle School Renovation project, which was identified by the school system as a top priority for the Repair, Renovation, and Expansion fund with the NC Lottery.  The project and need for renovations to the middle school wing at Highlands School include roof repairs, new windows, flooring upgrades, and repairs to the HVAC system, all of which were part of the school system’s capital improvement plan.

The Macon County Board of Commissioners approved an application to the NC Lottery for the project during an October joint meeting with the board of education. The board voted 4-1 to apply for the $500,000 grant funding with Commissioner Paul Higdon casting the sole “no” vote. With additional funding allocated to Macon County from the lottery’s renovation fund, the entirety of the Highlands School Middle School renovation project will be funded through state-allocated granted funding.

During the December 13 meeting of the Board of Commissioners, with the county’s application for NC Lottery Funds for the projects approved by the state, the new slate of commissioners unanimously voted to authorize Roland to enter into contract negotiations with LS3P Architects to complete the design work for the middle school renovations.

According to Roland, negotiations are ongoing with LS3P for the project and he expects a contract to be finalized and presented to the board for a vote during the January board meeting.

Roland then presented the board with an update on the current status of the Highlands Pre-K Project, which is still in early stages of discussions. As Macon County Board of Education member Hilary Wilkes, who represents the Highlands District, noted, while the project has been identified as the “Pre-K” project, the two pre-k classrooms that are proposed within the project are a very small portion of a larger Highlands School expansion which also includes expanding opportunities for Project-Based Learning (PBL) and provide CTE (Career Technical Curriculum) for students.

The Macon County Board of Commissioners approved a contract with LS3P on November, 8, 2022 for $329,255 for design services on the proposed new Pre-K for Highlands School. The total project cost for the Pre-K project in Highlands is $4.7 million and currently, there has been no funding allocated or identified for the proposed project.

Wilkes presented the urgent need surrounding the Highlands Soccer fields as the current conditions propose a significant liability. Addressing Macon County Board of Commission Chairman Paul Higdon, she noted that while he is adamant school capitol needs be addressed within the annual budgeting process, the situation at the Highlands Soccer fields occurred after the budget process was over and needs immediate attention.

In October, commissioners were made aware of the needs surrounding the soccer fields which resulted in the school’s soccer teams having to cancel games and several students being injured due to the condition of the field. During that meeting, Macon County Board of Commissioners voted 4-1 to solicit bids for the Highlands Soccer field turd resurfacing project, with Commissioner Higdon voting against the measure.

Wilkes noted that the project had been on the district’s capital outlay request in the past, however the county had not provided funding for the project and other needs arose and took precedent.

The project is anticipated to cost just under $1,000,000 to place turf on the field to make it useable year-round. Bids are expected to be submitted to the for the project in January.

Commissioner Paul Higdon made a motion to halt joint board discussions for the Macon Middle School track renovations, the Highlands Soccer Field, and the Highlands Pre-K Expansion project and send those items back to the board of education for scoring and prioritization in the coming year’s budget. Higdon noted the lack of funding allocated in the county’s current budget for the projects as being the reason to pause further discussion and have the school board reevaluate the district capital needs as his reason for the motion.

Macon County Board of Education Chairman Jim Breedlove addressed Commissioner Higdon clarifying that the board of education has met — with discussions of the Highlands project dating back to February 2022, nearly a year ago, and identified the projects as priorities, which is why they are before commissioners for funding consideration. According to Breedlove, the board could take the three projects Higdon noted, the middle school track, Highlands expansion, and Highlands soccer fields and put them in order of 1 to 3 — based on the district’s need, but ultimately, they are all priorities.

Macon County Attorney Eric Ridenour clarified Commissioner Higdon’s motion, stating that because the board of commissioners have previously allocated funding to LS3P for architectural design services on the Highlands Pre-K expansion, Higdon’s motion would need to include halting that contract, which would result in losing the funding already paid to LS3P.

Commissioner John Shearl noted that he did not support cancelling an existing contract and backing out on work LS3P is already committed to doing and in the process of completing.

County Manager Roland further explained due to the size of the Highlands expansion project, it would never be included in the district’s annual capital outlay requests. Macon County only allocates $1 million for capital outlay needs each year, with $600,000 being earmarked for technology. With the Highlands Expansion project proposal being estimated to cost nearly $5 million, it wouldn’t be feasible to be included in the district’s capital outlay requests, which includes things such as technology, safety, new vehicles, and other renovations and repair requests, but rather for larger planning, along the same lines as the new proposed Franklin High School Facility.

Chairman Higdon’s motion failed to pass due to lack of a second from the board. After Higdon’s motion failed  and consensus for the Board of Education to prioritize a complete list of all capital outlay needs and projects during the budget work session in January, Higdon noted that as Chairman he has the authority to adjourn a meeting whenever and with the meeting occurring the week of Christmas and discussion continuing until 9:30 p.m., he elected to adjourn the meeting and conversations will continue at another time.