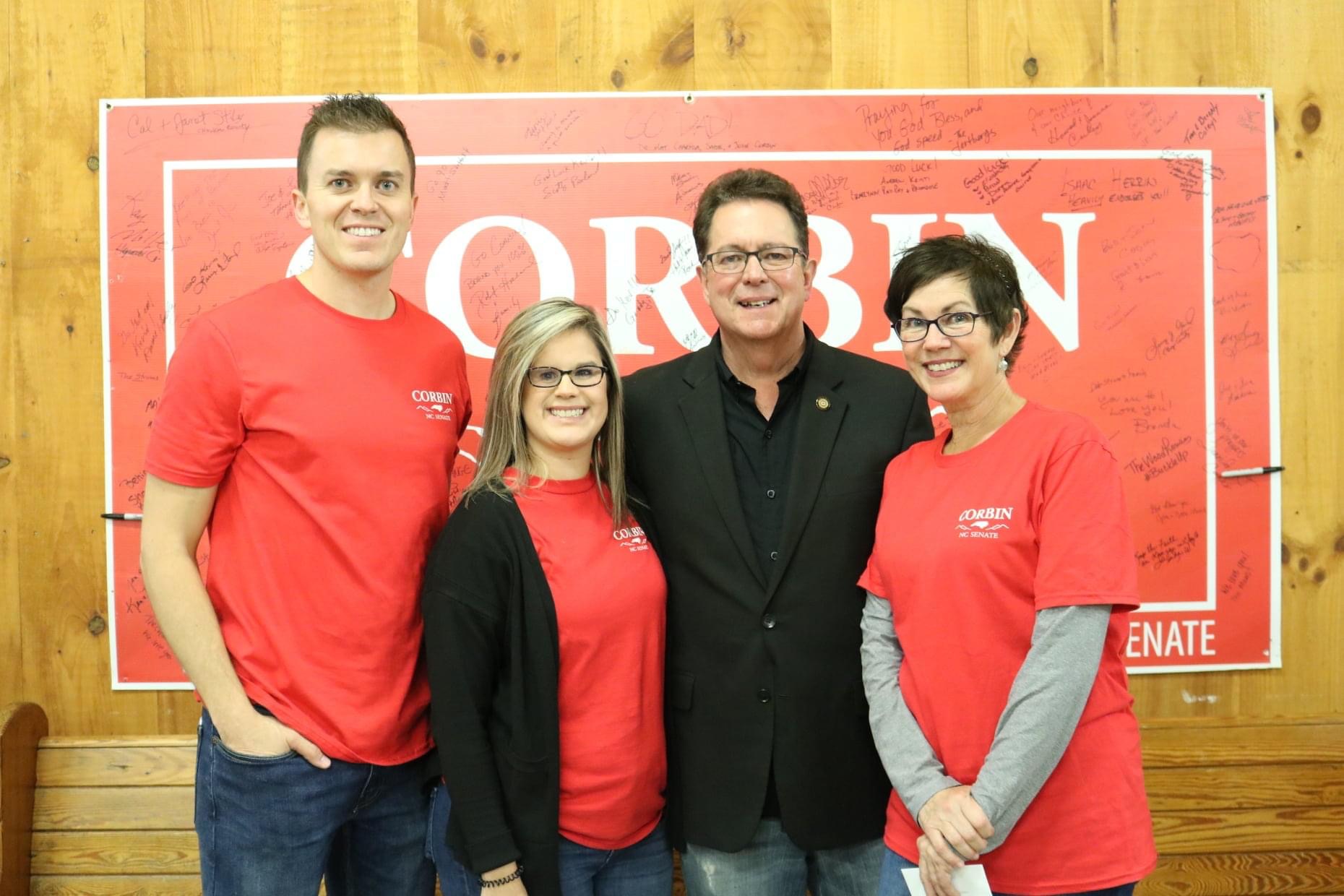 Sen. Corbin to file for re-election; will not run for Congress

With two weeks until filing opens for the 2022 election, Senator Kevin Corbin says he will not be running for Congress and instead hopes to continue serving voters in North Carolina Senate District 50 by running for a second term.

“My “freshman” term in the Senate has been extremely successful and I have worked extremely well with Representatives Gillespie, Clampitt, and Pless that have House seats within my current seven county district,” said Corbin. “We were able to deliver for this district with very pleasant success and I don’t think throwing that away is wise for myself or my Senate district. Through hard work and relationship building, we have brought more capital improvements to this district than we even thought possible just a year ago. In short, I love my current position as NC Senator and I feel I can offer more to the citizens of Western North Carolina as a Senator at this point than I could as a freshman Congressman.”

Sen. Corbin began debating a run for Congress just a few days ago with the surprise announcement that current Representative Madison Cawthorn will not be seeking re-election in his current district and instead will be running for office in the newly drawn NC District 13. Sen. Corbin said Rep. Cawthorn’s announcement came as a surprise and left little time to clearly assess the situation and determine a real feasibility of a Congressional run.

“First we only had a very short time to make a decision regarding a run for Congress,” said Sen. Corbin. “We appreciate the flood of calls we have had encouraging the congressional run. I felt like the decision was two-fold. First to decide if the decision to run for Congress was right for me, my family, and my current Senate district. Secondly, we had to determine if it was probable to win the race and secure the seat. Normally, the FIRST decision would be primary and then move on to deciding if we “could win.” With the short time allowed to make a decision, I felt like we had to explore both decisions at the same time.”

While Republican leaders in WNC who have represented voters in various capacities were seemingly caught off guard by Rep. Cawthorn’s announcement, select individuals within the district seemed well-aware of the tactical move, with some, specifically GOP District Chair Michele Woodhouse, poised to immediately launch a Congressional campaign.

Cawthorn’s surprise announcement nearly immediately followed by Woodhouse’s candidacy, is eerily similar to the moves made by Republicans just two years prior when then Rep. Mark Meadows announced his resignation to serve as Cheif of Staff for former President Donald Trump. At the time of Meadows’ announcement Rep. Cawthorn scrutinized the move as a political tactic, however two years later, it appears he followed suit.

Over the weekend, Cawthorn campaigned in the new sky drawn District 13 by attending Turning Point Faith Church in Charlotte where he was introduced as a “hero who has been draining the swamp and kicking butt.”

Rep. Cawthorn took to social media to declare his visit to his “new district.”

“So happy to speak at a church in my new district this past weekend. Looking forward to fighting for you all in DC,” read Cawthorn’s Fb post.

Despite Cawthorn’s deceleration regarding his new district, he is slated to continue representing WNC until the Nov. 2022 election.

Woodhouse immediately launched a campaign website in the days following Cawthorn’s announcement, although the website includes virtually no personal information about Woodhouse or even mentions Western North Carolina, but instead features a platform heaving in common Republican talking points such as being anti-abortion and includes phrases such as “Build the Wall.”

Sen. Corbin said given the short time he had to consider a run for Congress, he and his family decided he would be better suited to serve voters by staying in the North Carolina General Assembly.

“As soon as I heard about Rep. Cawthorn, I immediately began talking with my family and close friends about the idea of running for Congress and asked them to not give me an immediate answer but to thoughtfully examine the situation as if we knew a win were very likely,” said Sen. Corbin. “Secondly, we employed many experts in the political community from political analysts in Washington and Raleigh to colleagues in both Washington and Raleigh. We found that the district is conservative leaning and I won a Republican Primary election for my current Senate seat with a margin of 80% to 20%. Prior to that, our House wins had been with a winning margin of over 70%. My current district encompasses much of the newly redrawn Congressional district. I am in my third term in the NC General Assembly and first term in the Senate. We enjoy high name recognition in much of the district. With those factors determined the “electability” conclusion was simply this.  If we made a run and worked hard, the likelihood of winning the Congressional seat is good.”

Despite the statically probability of winning the open Congressional seat, Sen. Corbin said it wasn’t the right time for him or his family.

“The first and more important part of the decision making process was to consider what is right for my family, my district, and myself,” said Sen. Corbin. “The conclusion became clear. My family was hesitant about such a quick decision. Nobody in our “camp” knew about the Cawthorn decision until it was revealed in the media just a few days ago. We didn’t have a good feeling about that.  Secondly, I have quickly gained respect in the General Assembly having been there now three terms. I am in line to increase seniority in the Senate. Every member has a vote and we all understand that, but seniority is certainly a factor when it comes to things such as chairing committees, influence with other Senators, and possibilities of positions of leadership. Those are all factors in how well I am able to serve my district.”

Just as the recent census brought changes that resulted in the new Congressional District Rep. Cawthorn intends to run in, Sen. Corbin’s Senate District 50 will change slightly with the addition of Transylvania County.

“I look forward to having the opportunity of serving the folks of Transylvania County and have already started working to earn their support as their Senator,” said Corbin. “   “With all that said, I thank all those involved for helping to craft this decision to seek re-election to the NC Senate and not make a run for Congress at this time. I’ll not say never but just not now. Also, staying in my current position brings other possibilities for serving the State of NC which is a greater calling for me than serving in Washington. I don’t assume anything and am very careful to recognize that my re-election to the NC Senate is up to the voters and not me. I am however, simply announcing that I will file for re-election on the first day of filing which is December 6.”