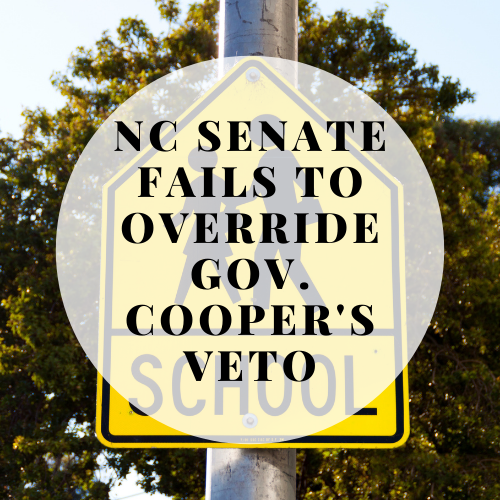 Senate Bill 37 would have required schools to provide access to in-person learning under Plan A (minimal social distancing) for students with exceptional needs As well as require schools to provide in-person learning options for all K-12 students under either Plan A or Plan B (moderate social distancing) — leaving it up to local districts to decide.

On Monday night, 29 opposing votes led to the Senate’s failure to override the veto. The Senate would have needed three-fifths of the vote. The vote was 29-20, one vote shy of the 3/5 requirement. One Democratic Senator who voted in favor of the bill did NOT vote to override the bill and another Democratic Senator who voted in favor of SB37 was not present for the override vote. To override the Governor’s veto, all Republicans and at least one Democrat would have needed to vote in favor.

Senator Kevin Corbin who cosponsored SB 37 was disappointed the bill did not pass.

“It is sad that Governor Cooper’s veto was sustained,” said Senator Corbin. “All the bill did was allow our students the option for in-person learning. All the schools in my 7 county district are already complying with Senate Bill 37. I am thankful and appreciative of our local educators for stepping up to the plate and getting back to the business of educating our youth. They deserve our best and “distance learning” is not our best.”

NC House Rep Karl Gillespie, who voted for the bill when it was sent to the House was also disappointed in the vote.

“It is extremely disappointing to know that all the students in North Carolina will not have the opportunity to return to the classroom,” said Rep. Gillespie. “We will continue to work to bring our students back in a safe and responsible manner.”

Governor Cooper said in a press conference last week that he supported the return to school but had concerns regarding Senate Bill 37.

“Students learn best in the classroom and I have strongly urged all schools to open safely to in-person instruction and the vast majority of local school systems have done just that,” said Governor Cooper. “However, Senate Bill 37 falls short in two critical areas. First, it allows students in middle and high school to go back into the classroom in violation of NC Department of Health and Human Services and CDC health guidelines. Second, it hinders local and state officials from protecting students and teachers during an emergency. As I have informed the Legislature, I would sign the bill if these two problems are fixed. As written, the bill threatens public health just as North Carolina strives to emerge from the pandemic.”

After officially vetoing SB37, Gov. Cooper released another statement on the issue.

“The question on SB 37 that I vetoed is not whether our children should be in the classroom in person,” said Cooper. “They absolutely should. The question is whether we do it safely. The bill allows middle and high school students to be in school without following NCDHHS and CDC guidelines on social distancing. SB 37 also removes authority from state and local officials to put students in remote learning in an emergency like a new COVID variant hitting our schools. I have asked legislative leaders to compromise with me on these two issues but so far they have not. I will continue talking with legislators and I will work diligently with the State Board of Education and the Superintendent of Public Instruction to make sure all of our children and educators are in the classroom, in-person and safe.”

Had Senate Bill 37 passed the legislation and been signed into law, it likely would have little impact on schools in Western North Carolina, who have been providing some version of in-person instruction for the majority of the school year. The bill, however, would have forced school districts in the Eastern part of the state which still remain completely virtual to transition to in-person learning.

Speaker of the House Tim Moore said that the legislation will continue to look for avenues to get students back into the classroom.

“We are disappointed that students will continue to suffer from elected leaders’ refusal to put their needs first, even as teachers were advanced in the vaccine priority list ahead of cancer patients under 65 to support safe classroom reopenings,” Rep. Moore said. “The General Assembly leadership is committed to delivering on our state’s constitutional duty to provide education access for families, and will pursue all available avenues to help North Carolina families overcome the massive learning loss forced on them by remote instruction.”