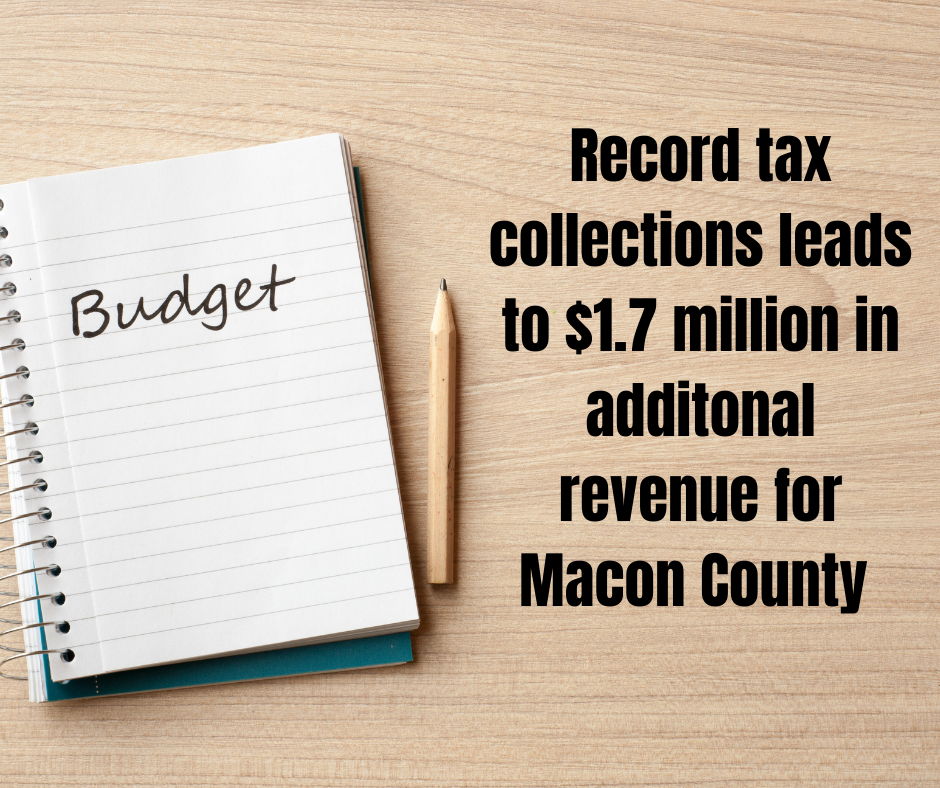 By Brittney Lofthouse on February 8, 2021

When Macon County Manager Derek Roland presented the 2020-21 fiscal year budget last year, he presented a budget plan that did not take into account the potential impact of COVID19. Like other local governments across the state, the budget planning process in Macon County began before the Pandemic began making headlines. Once COVID19 began to spread across the country, local governments because altering their budgets to anticipate significant revenue shortfalls caused by the pandemic.

“Sources such as NCACC and Moody’s Investor Service pointed to a forthcoming recession and provided budget guidance based on this assumption,” said Roland during last week’s budget work session. “Some sources were indicating as much as a 50% drop in sales tax revenue during the first quarter of the fiscal year.”

Now, a couple of months into the fiscal year, many local governments in North Carolina are realizing that tax revenues did not experience the loss anticipated — and in fact, revues have soared across the state.

Sales Tax was budgeted at a level 5.2% below the amount originally budgeted for FY 20’ resulting in an original budget revenue loss of $1M for Macon County. Through the first four months of FY 21’ however, sales tax collections are up 16% over 2020 actuals in Macon County and 11% statewide.  As a result of this trend, Macon County increased the sales tax revenue projections for the remainder of the year to the 2020 actual level.

“The collection rate for Property tax and motor vehicles was reduced by 1% to 97.3% in the original budget based upon an anticipated reduction in property owners “ability to pay” due to what everyone was certain would be a forthcoming recession,” explained Roland. “This was based upon guidance from NCACC and historical Macon County Data following the recession in 2009.  As of 12/31/20 however we are collecting taxes at the same percentage we did in the previous year, thus revenue projections for the remainder of FY21’ have been increased to the prior-year levels.”

Not only are other county revenue sources collecting at the same levels as the previous year — they are exceeding the prior year’s levels.

To begin FY 21’ a 10% decrease from FY19 actuals was budgeted for fees collected in Register of Deeds (ROD), Building Inspections, and On-site Wastewater and wells again based upon a projected declining economy.  Fortunately, however, Macon County experienced the exact opposite:

“We have been able to take advantage of these unforeseen revenue increases in service fees through January and have increased the service fee revenue to FY20’ levels for the remainder of the fiscal year,” said Roland. “These revenue increases have resulted in our ability to largely close the budget gap we faced to begin the fiscal year, getting us to a level that is almost as if COVID-19 had never happened.”

Moving forward, Roland said the county is taking a conservative approach, however many projects that were originally cut from the budget due to COVID19 are now able to be completed.

“Although much uncertainty remains for FY 22’, the $1.7M in additional revenue gained from a “booming yet fragile” economy enables us to restore capital funding to the priority areas of public safety and education,” said Roland.

To read more about projects funding with the $1.7 million surplus, click here