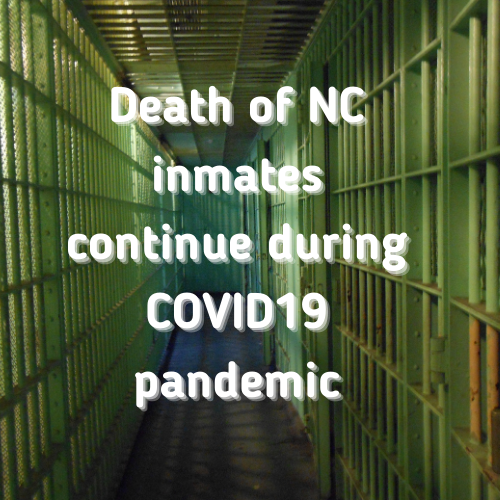 The Inside Scoop: How has NC prisons addressed COVID19

An Alexander Correctional Institution offender with pre-existing medical conditions, who tested positive for COVID-19, has died at a hospital.

“His death is saddening. We are working hard to mitigate the impact of COVID-19 in our prisons,” said Todd Ishee, Commissioner of Prisons. “The health and safety of the staff and the offender population is our top priority.”

The offender tested positive for COVID-19 on Nov. 9, when he was hospitalized. His condition worsened, and he died on Nov. 22.

The offender was a male in his early-80s who had underlying health conditions. Given his family’s right to privacy and the confidentiality of prison offender records, the Department of Public Safety will not further identify the individual. The death is part of an outbreak at the state prison, where there are 43 active cases of COVID-19, according to NCDPS.

Prisons leadership has taken more than four dozen actions throughout the North Carolina prison system to try to prevent transmission of the virus.

The press release is generally the same for each death that occurs. The name of the reporting institution changes as does the age and dates of positive tests and deaths, but everything else remains the same, even the quote from Ishee is copied and pasted.

The first COVID19 related death in North Carolina was reported on March 25. On April 1, North Carolina Department of Public Safety reported that an inmate in minimum custody unit at Caledonia Correctional Complex in Tillery tested positive for COVID19. That was the first positive test for the virus for an individual in custody within the NC state prison system.

On April 2, two offenders at Neuse Correctional Institution tested positive, which lead to a protest among offenders conceded for their safety.

“The appropriate security measures and appropriate levels of force were used to restore order, in what can be best characterized as an organized offender protest. No serious injuries were reported at the Goldsboro prison.”

On April 16, Neuse Correctional Institution was classified as a COVID19 outbreak with eight staff and 80 inmates testing positive, with 300 inmate tests pending. On April 20, because of the severity of the outbreak at Neuse Correctional Institution, the state prison system temporarily suspended  operations at one facility to combine staff at Neuse.

“The staff at Neuse have been working in the toughest conditions, for weeks on end, and desperately needed support,” said Todd Ishee, Commissioner of Prisons. “They are owed everyone’s thanks for their commitment to serving the public, standing tall in their daily responsibilities, and helping ensure the safety of their co-workers and those in custody.”

As Neuse CI battled an outbreak. Pender Correctional Institution reported the first COVID19 related death of an offender. The offender, a male in his late 50s with underlying health conditions, exhibited symptoms of a viral infection on April 8, 2020. He was promptly isolated from the population, in keeping with guidelines from the Centers for Disease Control (CDC) and the NC Department of Health and Human Services, and tested for COVID-19.  The test came back positive on April 10, 2020. Despite constant medical attention, he was hospitalized on April 13, 2020. His condition worsened, and the offender died at the hospital on April 21, 2020.

On April 24, Neuse CI reported their first COVID19 related inmate death. The offender was a male in his late seventies with underlying health conditions. He tested positive for COVID-19 on April 18, 2020. He was hospitalized on April 20, 2020. His condition worsened, and the offender died at the hospital on April 23, 2020.

On April 27, the state ramped up testing at the North Carolina Correctional Institution for Women (NCCIW) in Raleigh, testing all 161 offenders in the Canary Unit — which showed 70 testing positive.  The mass testing was ordered after 10 offenders had tested positive in the unit.

On May 6, the NCCIW reported its first death, a female offender in her late 60s with underlying health conditions. She tested positive on April 18, one of the first to test positive within the facility, and was hospitalized on April 19. Her condition worsened and she died in the hospital on May 6.

Despite deaths continuing, on May 12, the division of prison system reported that most inmates had recovered after testing positive. Of the 642 individuals testing positive among eleven prison facilities, more than 500 have now met the DHHS and Centers for Disease Control (CDC) criteria to be released from medical isolation. The majority of offenders (427) presumed to be recovered are housed at the Neuse Correctional Institution in Goldsboro, where 467 offenders tested positive for the virus, most in a prison-wide testing operation from April 15-16. Over 90 percent of those individuals remained asymptomatic. Of the 91 offenders who tested COVID-19 positive at the North Carolina Correctional Institution for Women, more than 50 are now presumed recovered.

It was not until May 18, nearly two months after the first COVID19 death in North Carolina that The N.C. Department of Public Safety announced an initiative to make COVID-19 testing available to employees in its Division of Adult Correction and Juvenile Justice (ACJJ).

On May 29, it was announced that To protect staff and offenders, Division of Prisons officials today initiated the testing of all 420 offenders at Caswell Correctional Center, as well as continuing to provide testing access and to encourage staff to be tested. Data and previous experience at Neuse Correctional Institution prompted the decision to test all offenders at the facility. Of the 405 offenders who were tested, 31 tested positive.

It was not until June 18 that North Carolina ordered the testing of all 31,000 offenders for COVID19, which cost the state $3.3 million.

Lawsuits were filed and a preliminary injunction issued in June which mandated that protective measures such as surveillance testing and quarantines after movement be put in place at each facility.

The first youth tested positive for COVID19 on July 24 at the Pitt Juvenile Detention Center in Greenville.

The Albemarle Correctional Institution had three offenders die between July 15 and July 24 as a result of COVID19. All offenders were male in their early 50s to late 70s. In all three cases, the offenders tested positive around July 1.

The state reported the mass testing that was launched on June 18 was completed on August 6 and showed a total of 619 individuals who tested positive.

On October 12, seven months after the first COVID19 death in NC, The Division of Adult Correction and Juvenile Justice – Prisons launched a pilot program to test all staff at three prisons aimed at improving staff health and safety, as well as reducing the potential for spread of COVID-19 at the facilities.

As of October, 48,000 COVID-19 tests had been administered in the offender population. And new outbreaks were identified weekly across the state’s 11 prisons.

Prisons have taken more than four dozen other COVID-19 actions to include:

Distribution of cloth, three-ply face masks, enough to supply six to all staff and offenders, as well as distribution of medical-grade PPE to staff who come in contact with COVID-positive offenders.

New offenders to the prison system are placed in medical quarantine, without contact with the general offender population, and tested for COVID-19.

Offenders who are transferred to other prisons are placed in medical quarantine, without contact with the general offender population.

Offenders who test positive are promptly separated from the rest of the offender population and placed in medical isolation.

The housing units where the COVID-19 positive offenders were housed are placed under medical quarantine for close observation with twice-daily temperature checks.

All housing units at the prisons are kept in groups (cohorts), to prevent the mixing of offenders in one housing unit from those in other housing units as a precautionary viral-spread mitigation strategy.

Despite the efforts taken by the prison system, inmates have averaged nearly one COVID19 death a week since the first death was reported. The number of COVID19 deaths doubled in October, a time where protocols and testing were supposed to be rampant and procedure. While safety measures had been issued within the prison system, at the same time, transfers and courts commenced, meaning that prisons were moved from facility to facility and transported across the state for court.

Under the order, prison officials are supposed to either test a prisoner prior to the move or quarantine them for 14 days once they arrive at their new prison. DPS says it houses transferred prisoners away from the general population in cohorts during this period.

While the state prison system is testing and may be following protocols, offenders on the county level are held to a different standard and are governed differently.

Last month, in response to intensifying COVID-19 outbreaks at the federal prison complex in Butner, North Carolina, the American Civil Liberties Union, the ACLU of North Carolina, Washington Lawyers’ Committee for Civil Rights and Urban Affairs, and Winston & Strawn filed a class-action lawsuit today seeking adequate medical care for people incarcerated in Butner Federal Correctional Complex. The lawsuit is asking for the rights of people incarcerated to be protected and conditions be made safe for those who remain in custody amid the COVID-19 pandemic.

Butner is a federal institution and is not managed by the North Carolina Division of Prisons. As of the time of the lawsuit last month, more than 1,000 inmates had tested positive and 27 had died, more than across the entire NC State Prison system.