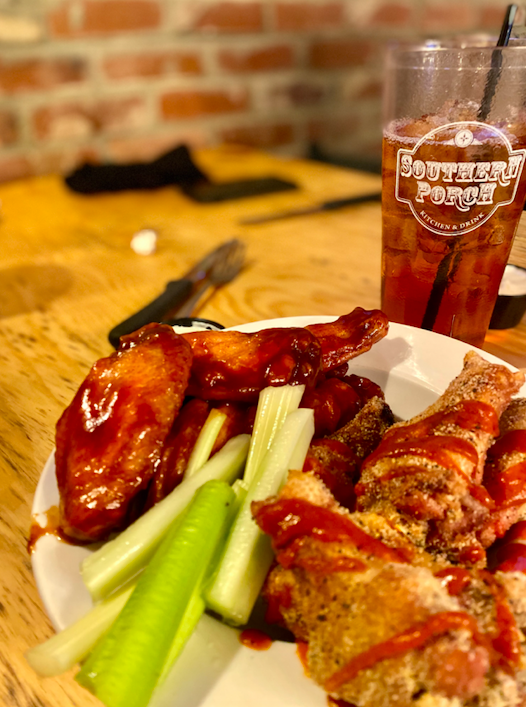 The Inside Scoop: The best date night spot in WNC

By Brittney Lofthouse on December 6, 2020

It is pretty rare when Nick and I get a free night to have a date night, but when our schedules line up — or if it’s a special occasion — we always, ALWAYS sneak over to The Southern Porch in Canton.

A couple of years ago, my good friend Nathan and his stunning wife Michaela were set to open Southern Porch. It was a week or two before their actual opening, but it was also my birthday, so Nathan made it possible for me to have a birthday dinner there. Over the next five years, every birthday (with the exception of COVID) has been held there. To celebrate Mother’s Day for me incredible momma and mother-in-law AND the day they heard Sawyer’s heartbeat for the first time… we celebrated at Southern Porch. I even spent Thanksgiving there with my girlfriends before Nick and I started dating.

So the last time I realized that Nick and I would be kid-free and we were both off of work — there was no question where we were headed — The Southern Porch.

The building it sits in is beautiful and actually predates the town of Canton itself. It is housed in what used to be The Imperial Hotel — which was constructed in a small mountain pass-thru town called Pigeon Ford. The Imperial started as a Queen Anne style of home built in 1876. That means that the restaurant sits in a piece of history, being constructed 11 years after Lee surrendered to Grant, 13 years before construction started on the Biltmore House, 17 years before Canton was incorporated, and 27 years before Champion Paper and Fiber Company arrived from Ohio in 1903 to begin construction of the paper mill. 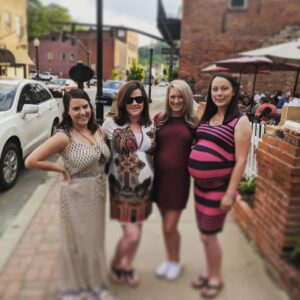 The Imperial transformed into a hotel for workers for the Mill in 1910 when a 4-story tower was added to the west side. A couple out of New York coined the name “The Imperial Hotel” which is still displayed on the front of the restaurant today.

Not only was The Imperial known as one of the state’s best two-dollar hotels, but it was also one of the first hotels in North Carolina to have electricity. The hotel changed hands and names over the years, closing its doors as a hotel in the late 1960s.

Pat Smathers brought new life back to the building in the 80s when he renovated the building and turned it into apartments and “THE” place to be in Canton. Smathers restored the building back to its original beauty, removing the brick facade and returning The Imperial to its 1920 appearance before The Southern Porch Kitchen & Drink moved in and opened my favorite date night spot in Western North Carolina. 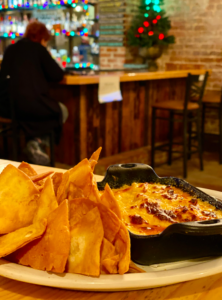 I will say that my last visit to Southern Porch broke my heart a little, as they were out of Cold Mountain — but I get it, Tis the Season. But the specialty cocktails and always rotating line up of locally brewed beverages never ever disappoints. Wednesdays the wings are on special, but I would advise against the lemon pepper siracha when they have them — those do NOT mess around. The chenders are a house favorite, and in reality, I have probably had just about everything on the menu and I can’t say that I have ever been disappointed. At least in the food and atmosphere… I did find myself dining there after a heart-wrenching break up on my birthday — but even for a bad day, there is was no place else I would have rather have spent the day.

I consider the Southern Porch a true gem. I have convinced only my favorite people to travel to Canton with me to experience my love for the place, and I really really hope you will make the trip soon. And when you do, let me know what you think!

Southern Porch is located at 117 Main Street in Canton. If you ever stop in, make sure to tell Nathan and Michaela I said hello.

Published in Latest News and Opinion