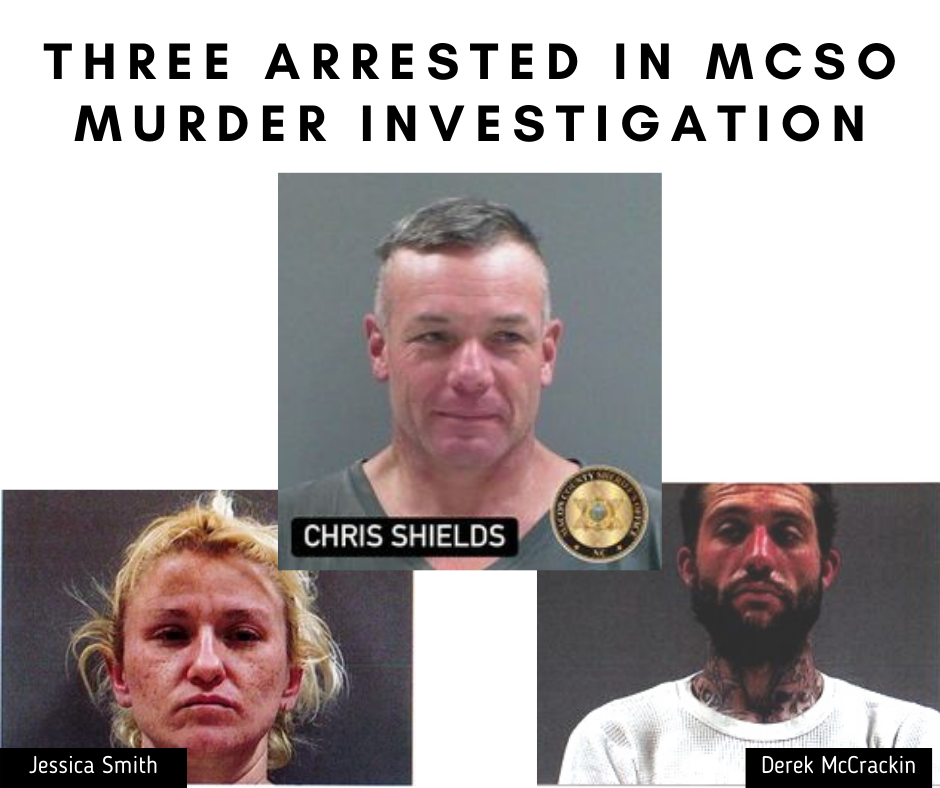 Derek McCrackin, Jessica Smith, and Christopher Shields have all been arrested and are in custody in Rabun County, Georgia waiting extradition to Macon County, North Carolina in connection to a homicide investigation launched on Friday, May 20.

The original “Missing Person” report was filed on Friday with the Macon County Sheriff’s Office by a family member who had not heard from his sister for several weeks.  Detectives with the MCSO worked with the family member and the Rabun County Sheriff’s Office attempting to locate her and other individuals she was known to associate with.  Throughout the day, MCSO Detectives also communicated with other law enforcement agencies attempting to locate anyone who had seen or been with the missing person. The investigation eventually lead detectives to two specific areas of Macon County.

Both scenes were secured by deputies and additional assistance by the SBI was requested.  By late Friday evening, MCSO detectives along with assistance from the NC State Bureau of Investigations and the District Attorney’s Office executed search warrants at the two locations. Members of the Otto Fire Department and the Chief Medical Examiner’s Office also provided substantial assistance.

During the course of our investigation, Christopher Shields of Otto, NC  was identified by Detectives as a person of interest and was located, interviewed and released as the investigation continued. While conducting their investigation, additional interviews were conducted and it was not until later in the day that Christopher Shields would become a prime suspect in our investigation. Following our field interview with Shields, Rabun County Sheriff’s Office detained him during a traffic stop where he was the passenger in a vehicle entering into Rabun County Georgia. This traffic stop was a collaborative effort by detectives between Macon and Rabun County Sheriff’s Offices.

Shields was charged with kidnapping, with additional charges expected pending positive identification of the autopsy results.

Felony warrants for desecration of a corpse were issued for the two other suspects, McCrackin and Smith, on Monday. McCrackin was apprehended in Rabun County on Monday and Smith turned herself in a short time later.

“Thanks to tips from citizens from both Macon County, NC, and Rabun County, GA we can confirm both suspects Smith and McCrackin are now in custody for charges related to the ongoing Macon County homicide investigation,” said Sheriff Holland. “As part of our investigation, we are continuing to follow up with any and all information including attempting to locate other individuals who may have knowledge about the victim in this case. We have information that leads us to believe there are individuals who saw the victim prior to her death with suspect Chris Shields and also after her death. Detectives from both Macon County and Rabun County Sheriff’s Offices have worked tirelessly on this investigation since the case was initiated.”