Students in Macon County Schools are first introduced to disc golf in their physical education classes. Two elementary schools in the county have installed disc golf courses on their campuses using grant funds to coincide with the lessons.

In terms of public access, the Siler Farms Disc Golf Course is located along the Little Tennessee Greenway near Southwestern Community College and is maintained by the Franklin Disc Golf Course. There is also a small course erected on the hill beside the Lazy Hiker in Franklin.

As one of the fastest-growing sports in the world, residents of Western North Carolina will soon have a new disc golf course to try out — the Sunny Side Disc Golf Course in Franklin.

The Franklin Town Council unanimously voted Monday night to open the old Whitmire Property up for public access for the first time since the town purchased the property. The town will use undesignated funds left over in the town’s event budget to purchase the disc golf baskets. In the event that the town decides a different use for the Whitmire Property is better suited in the future, the disc golf course can be easily removed and relocated.

With the town’s approval, the Franklin Disc Golf club presented a plan to construct a non-invasive 9-hold course around the property — which would need little work aside from purchasing the baskets used for holes and established tees.

Disc golf is a flying disc sport in which players throw a disc at a target; it is played using rules similar to golf. It is usually played on a course with 9 or 18 holes. Players complete a hole by throwing a disc from a tee pad or area toward a target, throwing again from where the previous throw landed until the target is reached. Usually, the number of throws a player uses to reach each target is tallied (often in relation to par), and players seek to complete each hole in the lowest number of total throws.

Over the past five years, an additional 23,000 members have joined the national Professional Disc Golf Association, with more than 53,000 members as of 2019. During COVID19 — disc golf courses around the country saw an increase in use due to the socially distant tournaments and outdoor recreation.

The Whitmire Property sits just under 13 acres and was purchased for $1,575,000 in November 2004 by the town of Franklin. At the time, town leaders wanted to construct a new town hall on the property, but that was later changed and the new town hall was built on Main Street instead, leaving the property to go unused for more than a decade.  The property was last appraised at $2.15 million in August 2008.

Since 2004, there has been much debate around the property and the best use for it, however, little private interest has come forth and the property remains for sale. While the property will remain on the market and the town encourages the public to speak up regarding additional potential uses, the public will get the first chance to take advantage of the park this spring.

While the disc golf course will be laid out throughout the 13 acre partial, it will open the property up to the public. The rolling hills and open concept will provide a nice green space for the community to utilize. 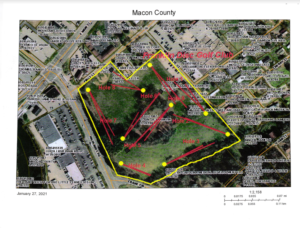 Members of the disc golf club said that once the equipment is ordered, it would take around a month to receive the needed items, with installation taking about two weeks. With the board’s approval on Monday, the disc golf course will be ready for public use by mid-April.