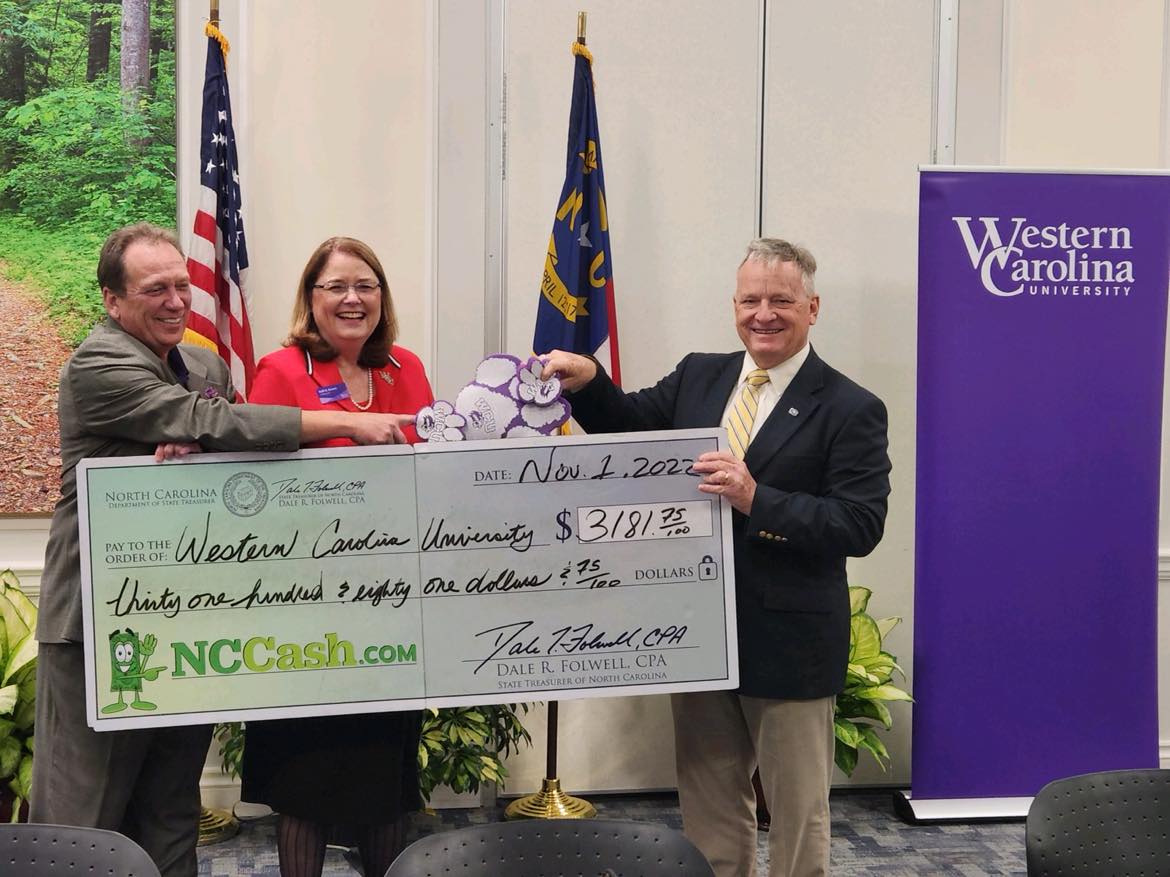 By Brittney Lofthouse on November 2, 2022

Jackson County has special significance for State Treasurer Dale R. Folwell, CPA. The treasurer is a lifelong motorcycle enthusiast, and the mountains and overlooks of Jackson County make it a mecca for the biking crowd. It’s also home to Western Carolina University, whose employees are members of the State Health Plan and Retirement Systems Division.

Treasurer Folwell was on the Western Carolina University campus on Tuesday, Nov. 1, to return missing money from the Department of State Treasurer’s (DST) Unclaimed Property Division (UPD). During a routine review of data in the system, UPD staff identified $3,181.75 belonging to the university.

“North Carolina has long been the envy of the nation when it comes to the quality of higher education we offer. Great institutions of learning like Western Carolina University are responsible for that well-deserved reputation. It has grown from a fledgling school in 1889 to a world class educational destination of 12,000 students today,” Treasurer Folwell said. Western Carolina is the fifth oldest among the 16 campuses of the University of North Carolina System.

“At the Department of State Treasurer, we have a motto about watching the pennies and paperclips that promotes good stewardship of public resources. As keeper of the public purse, I take my role seriously when it comes to returning money to the rightful owners. I am pleased to return this money to Western Carolina University to help continue its mission of preparing our next generation of public employees, leaders and thinkers,” Treasurer Folwell said.

“I think it’s a cool thing, finding the rightful owners of that money. The state treasurer called me and wanted to give me $3,000,” said Michael Byers, vice chancellor for administration and finance. “I’ve been really pleased, and I can’t say enough good things about the Department of State Treasurer. The diligence they put into returning this cash to the citizens of North Carolina is a very good thing, and now I’ve seen it firsthand.”

Byers said the money would be put into the university’s general scholarship fund. The university’s financial aid staff “work night and day trying to figure out how to help students afford college, and this money will help one student, or several students, close the gap next year,” he said.

UPD, commonly called  NCCash.com is the repository for 17.7 million properties valued at $1.02 billion under DST’s custody awaiting return to the rightful owners after being lost, misdirected or overlooked. More than 19 million owners are associated with those properties being safeguarded by DST. There are 46,867 properties valued at more than $4 million waiting to be claimed by the 51,375 listed owners in Jackson County.

UPD paid 178,857 claims amounting to more than $105 million during the 2022 fiscal year that ended June 30. Both numbers were historical records. The returns are on pace to set another record this fiscal year. Through Sept. 30, UPD has paid 45,262 claims totaling nearly $28.1 million from NCCash. Part of that total has been disbursed through the NCCash Matchprogram, a no-hassle, expedited system that eliminated paperwork processing. As of Sept. 30, DST paid 25,058 Cash Match claims totaling nearly $8.4 million.

Under state law, UPD receives and safeguards funds that are escheated, or turned over, to DST. The unclaimed property consists of bank accounts, wages, utility deposits, insurance policy proceeds, stocks, bonds and contents of safe deposit boxes that have been abandoned.

Unclaimed property can result from a person or entity forgetting they are due money, or from a move of location and forgetting to provide a new address. It also could result from a typing error in a house number or zip code in an address, a name change, or data loss from a business converting its computer system. As society becomes more mobile and steadily moves to electronic transactions, the risk of having unclaimed property has increased.

More information, including how to find out if you are owed money, can be found at https://www.nccash.com/