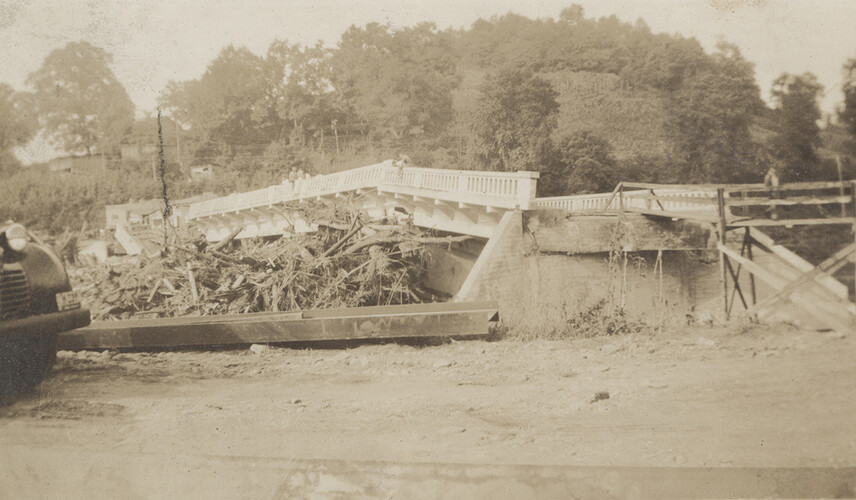 The winners and honorable mentions in this year’s competition will be recognized at a luncheon on May 4 in Raleigh.

“Multimodal projects are important in all size communities in North Carolina,” said Julie White, NCDOT’s deputy secretary for Multimodal Transportation. “All of these projects connect people to places and make our state more accessible, attractive and economically competitive. We can’t wait to honor this year’s winning projects.”

This year’s Mobi Awards finalists are:

The Old Cullowhee Road Bridge construction is part of decades long history connecting Western Carolina University to communities across the Tuckasegee River. The above photo is from Western Carolina University’s Southern Appalachian Digital Collections and according to the caption depicts: “The flood of 1940 in Cullowhee, North Carolina occurred on August 13th as a result of a southeast hurricane. Flood waters and landslides damaged several homes and structures, and produced casualties. Photographs dated August 30th display the aftermath of the flood in Cullowhee. This photograph shows the destruction of the Old Cullowhee Road bridge from the flooding of the Tuckasegee River.”

The most recent renovation and completion of the Old Cullowhee Road Bridge is arguably more important than ever as the backside of WCU is more lively and travelled than ever before. With new housing developments and a growing student population, Old Cullowhee Road is becoming a main entrance point for the university. With the construction of the university’s new Steam Plant, the bridge will serve as crucial infrastructure for students and residents alike.

The Dillsboro Bridge was completed about one year ago and due to innovative thinking was completed quicker and less expensive than originally anticipated. Construction began in 2020 with an expedited plan that cut construction time from three years to nine months by closing the road instead of reducing lanes and building a temporary bridge. The plan also saved $3 million from the estimated cost with the Town of Dillsboro receiving $452,000 of the savings as part of an agreement with the contractor.

A panel of distinguished judges selected winners in five categories – Rural, Urban, Small Urban, Large Urban and Innovation. Each of these projects was scored based on how well the project spurred economic development, created jobs or improved public health or made other unique and significant contributions. All this year’s entries were also placed in a sixth category — Most Voted Project. Those projects were placed online so the public could select a winner.

This year’s awards luncheon will be from 11 a.m.-1 p.m. May 4 at the Raleigh Marriott City Center, 500 Fayetteville St. Media are invited to attend this year’s event. All others are asked to register in advance at The 2022 NCDOT Mobi Awards (constantcontact.com).