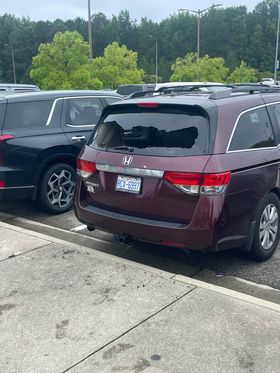 Just after the July 4th holiday, the Franklin Little League 8U All Star team was competing in the state tournament in Wilson, North Carolina when shorts rang out in the baseball complex.

The game was being live-streamed by Macon County resident and mother of one of the players, Caitlin Koszczepki, for folks watching at home when gunshots could be heard and the crowd was seen scattering.

The WPD Forensic unit, in conjunction with Detectives, conducted an extensive crime scene search for evidence. During this search, three 7.62X39 caliber shell casings were located approximately 2410 feet (.5 mile) from where the projectile that struck a van parked inside the stadium was recovered. These casings were located near the roadway. A roadway sign, in close proximity to the recovered shell casings, was also located and appeared to have been struck by three projectiles. The projectile from the van was weighed and measured and appears to be a preliminary match to the shell casings recovered.

The first call to dispatch surrounding the incident was logged at 10:31 according to official emergency communication reports. The first law enforcement officer then arrived on scene in just under a minute. Law enforcement officers blocked off the scene while investigating what was initially reported to be an active shorter situation within the sports complex. As law enforcement arrived on scene and began to secure the complex, emergency medical personnel were staged nearby waiting for further information.

With no other shots fired after the initial round of three shots, law enforcement determined that it was not an active shooter situation and instead transitioned to a “shots fired” call response.

Despite additional games scheduled to take place in the tournament the following Monday, the Franklin All-star team decided to leave Wilson County and return home to Franklin.

These items have been submitted to the State Bureau of Investigation Crime Laboratory for further forensic examination. Due to the investigation still being active, more information will be released as it becomes available.