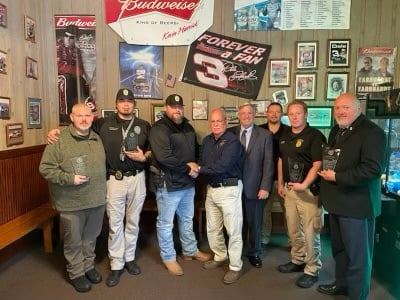 The investigating team for U.S. v. Shannon White was selected by the U.S. Attorney’s Office to receive the “Excellence in the Pursuit of Justice” award. The team is being recognized in the “Outstanding Case” category, for its collective work involving an overdose death prosecution in Asheville and its exceptional contribution to the mission of the Department of Justice.
The recipients of the award are:
Special Agent Shaun C. Ziadie – Group Supervisor/HIDTA – Asheville DEA.
Deputy Brian A. Leopard – DEA Task Force Officer/Swain County Sheriff’s Office
Chief Deputy Jason Gardner – Swain County Sheriff’s Office
Captain Brian Kirkland – Swain County Sheriff’s Office
Lieutenant Andrew Bryant – Swain County Sheriff’s Office
Detective Sergeant Roger Neadeau – Cherokee Indian Police Department
Special Agent Matthew Wilde – FBI – Baltimore Field Office
Shannon White, 44, of Bryson City, N.C. was sentenced to 21 years in prison in May for distribution of a controlled substance resulting in death. According to evidence presented at Shannon’s trial, witness testimony and documents filed in the case, White, who is an enrolled member of the Eastern Band of Cherokee Indians and resident of the Cherokee Indian Reservation, was involved in the distribution of narcotics in an around Jackson and Swain Counties. Trial evidence established that on January 27, 2019, a victim, identified in court documents as J.F., ordered heroin from White. White agreed to supply the heroin to J.F. and supplied him with a substance that White believed to be heroin, but turned out to be fentanyl. According to trial testimony, J.F.’s use of the fentanyl resulted in J.F.’s overdose death. According to trial evidence, White continued to sell narcotics even after she became aware of the J.F.’s death, and falsely accused two other individuals of committing the crime.
Federal, local and tribal law enforcement agencies worked together to conduct a thorough investigation into the overdose death. According to AUSA Tom Kent, who submitted the nomination, the investigative team worked tirelessly to conduct a thorough and diligent investigation and set out to identify both the substance that killed Joshua and the dealer who supplied it to him. From collecting evidence at the scene, to combing through texts to determine Joshua’s source of supply, the team worked non-stop and eventually identified Shannon White as the person who sold Joshua the fatal substance. Working alongside throughout the investigation, the team’s efforts led to White’s federal indictment and eventual conviction by a jury.
In the run up to the trial, the investigative team collected additional evidence that proved White continued to distribute narcotics even after the victim’s death. White was subsequently sentenced to 21 years in prison. The evidence regarding the continued distribution was cited by the Court as the reason for the added year to White’s 20-year mandatory sentence.
This case was a first of its kind for the USAO in Asheville and has since become the standard by which investigators are now working a number of other fatal overdose cases in that division. The success of the prosecution was a direct result of the tireless efforts and professionalism of the investigators with every aspect of the investigation, even in the midst of the Covid-19 pandemic.