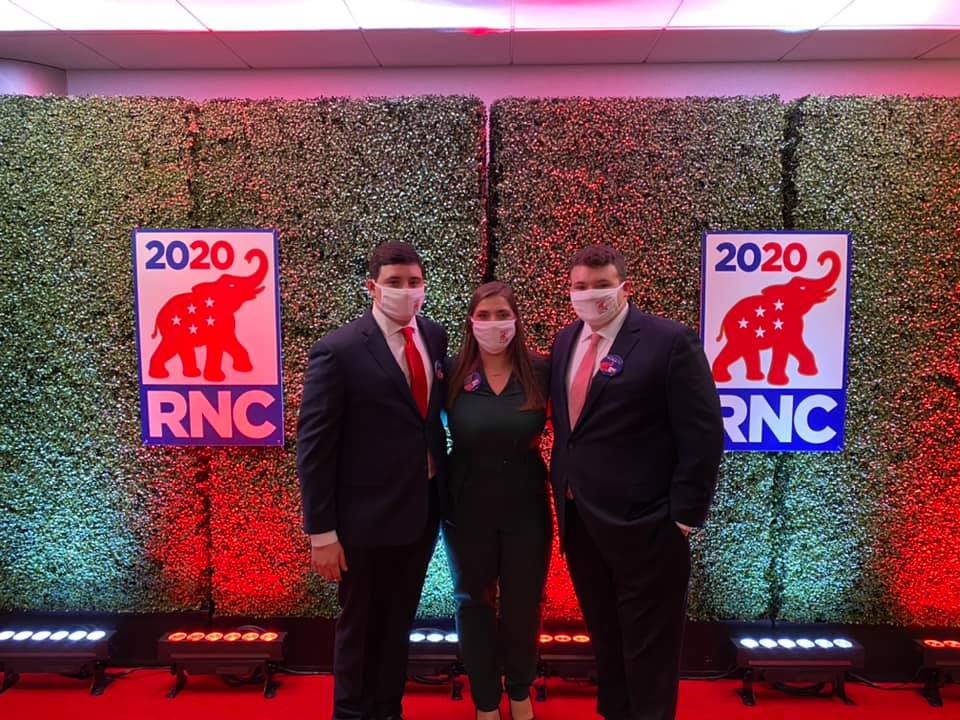 A group of energized college students is diving headfirst into the political scene in hopes of making a change for their generation.

“We are the future,” said Turner Page, a college student attending Southwestern Community College. “It is up to us to get involved and take action to create the change we want for our generation.”

Page is one of 10 college students interning with the Macon County Republican Party. The group meets regularly at the headquarters an are actively involved in politics on the local, state, and federal level.

Page, along with two other Macon County GOP interns Evan Pritikin and Veronica Parrish, had the opportunity last week to volunteer at the Republican National Convention in Charlotte.

“It was a really great experience,” Page said. “We had to complete background checks through homeland security and go through a lot to be selected to volunteer. Being there first hand and getting to see the convention in person really gave me an entirely different perspective.”

The trio attended the RNC and was assigned the task of meeting delegates at the airport when they arrived in Charlotte.

“We were spread out throughout the airport at different terminals,” said Page. “We would greet the delegates as they got off of their flights and we would escort them to the hospitality tent set up at the airport. From there they would get a taxi or uber to their hotel.”

Page said having the opportunity to see delegates from all over the county, even as far away as Hawaii, was a really unique experience. 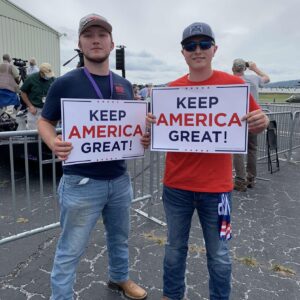 While Page was at the RNC, Brian Penland and other members of the College team had the opportunity to greet President Donald Trump at the Asheville Regional Airport when he landed on Marine One to visit a local farm. Penland said the diverse group at the airport was an encouraging surprise.

“I was really blown away to see all the different types of people there,” Penland said. “There were young kids that were 5 or 6 and then older individuals, all there eager for the chance to see the President.”

Penland, who said he comes from a long line of Macon County Republicans, said that he wanted to be involved in politics because he is proud of his Country.

“I want our generation to know that it is ok to be proud of who you are and where you come from,” said Penland. “For example, how some Democrats took God out of the Pledge of Allegiance during the DNC. I think that is wrong. We should be proud of our Faith.”

Penland said he understands that not everyone is Christian and so “God” might look different for different people, but respecting each other is important. “We are a country made up of lots of different types of people and that is what makes this country great,” said Penland. “But taking God out of something like the Pledge is not a way to do that.”

Penland also noted that he wants to be part of the generation to change the atmosphere around politics.

“Right now everything is always a fight,” he said. “All sides are so far off that we can’t come together to agree on anything. I want to help bring us back together as one great country. We have to be able to have civil discussions and understand that we may not always agree and that is ok. Politics are not personal to me, they are politics, you have to leave your feelings out of it.”

Parrish, who attends Western Carolina University and is studying Criminal Justice and Political Science, said that she decided to be involved in this election cycle because she wanted to take action.

“I didn’t want to just talk about how things could be different or better, I wanted to actually do something to make them better,” she said. “If we don’t do something now, we aren’t going to have any young people left in Franklin. We need to build this town up for them.”

Parrish is taking the lead on the College Republican’s internship project of petitioning the community to support pay increases for local law enforcement.

The group has a petition at the Macon County Republican Party Headquarters, online, and has been visiting local businesses and organizations to raise awareness and solicit support.

Page said they decided to take on the project after talking to Parrish, who is pursuing a career in law enforcement.

“After she told us about how after she graduates from Western with a degree in Criminal Justice, she would start out working in Macon County at the same salary as someone right out of high school with no education, that just didn’t seem right.”

Penland said that the culture surrounding law enforcement is negative, so the least the community can do is pay officers for the job they do.

“What law enforcement get paid should reflect the work that they do, and it doesn’t right now,” said Penland. “They deserve all of our respect for the job that they and paying them fairly is a way we can respect them better.”

Representative Kevin Corbin stopped by the headquarters on Monday and visited with the college students. Rep. Corbin is one of several local leaders working with the students as they become more involved in local politics.

“I was elected to the Macon County Board of Education when I was just 22 years old,” Rep. Corbin said. “Everyone told me I didn’t stand a chance but I ended up beating the incumbent that year. Then I got reelected and ended up serving 5 terms.”

Rep. Corbin said that he is proud of the students and their desire to take action.

“It is so refreshing to see these guys wanting to get out and do something for their community,” said Rep. Corbin. “These guys aren’t just sitting around and complaining about the way things are, they are taking it into their own hands to change it and I am so proud of them for that.”

Most of the group plans to pursue politics in some capacity in the future whether it’s running for office someday, which Page and Penland hope to do, or if it’s staying behind the scenes and pursuing it as a profession, which is what AJ Braswell intends to do.

Braswell is a Senior at Western Carolina University and was just accepted into the law program at the University of Chapel Hill, which he will begin next Fall. Braswell, who already holds his Paralegal Certification, plans to continue pursuing law and political science with the intent to work in politics.

“I like being behind the scenes,” Braswell, who currently serves as the Chair of the Macon County branch for Dan Forest’s campaign. “I plan to work in politics, but I want to work for someone – not run for office myself.”

Whatever the future holds, Macon County Republican Party Chari Carla Miller said they are well on their way to building up their resumes.

“I am just blown away by their drive and determination at such a young age,” Miller said. “Just like with the petition for the Sheriff’s Office pay, they saw a problem and took the initiative to do something all on their own, and that is what we need from the next generation.”