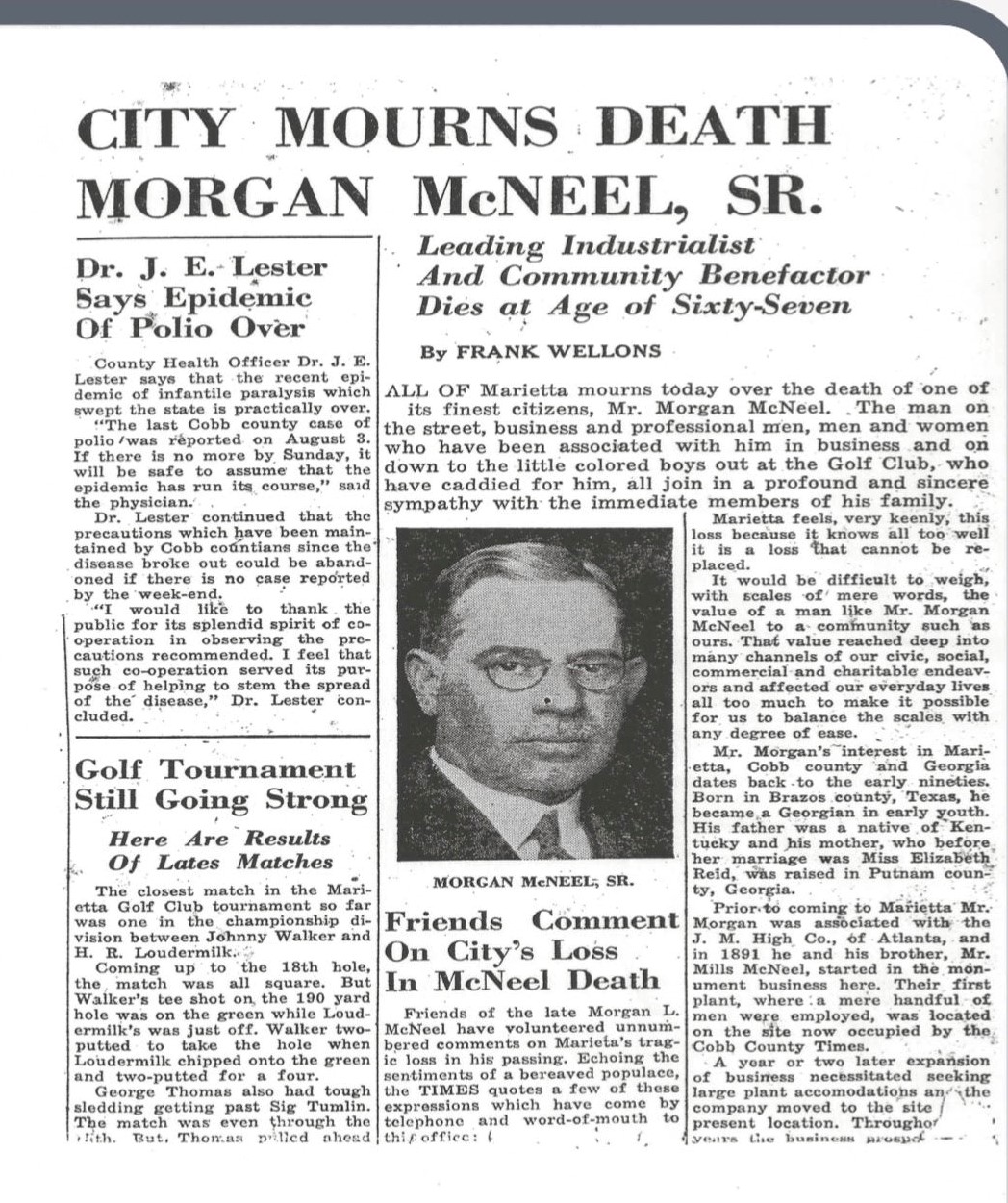 Are Confederate monuments a result of racism or patriotism… or the greatest marketing campaign of its time?

The following is an opinion – a theory even.

I lack the ability to do anything halfway. So when I become invested in something, it usually becomes an obsession until I find something new to channel my energy into. As of late – that obsession has been Macon County’s role in the Civil War and the monument erected in Rankin Square memorializing such. Through my work as a journalist over the years I have briefly touched on the local history of the monument so I have always been aware of it’s intended purpose, but it wasn’t until this week that I fell down a rabbit hole that lead me to develop the following theory.

I could write for hours on my opinions of “The Lost Cause” – the idea that the South rewrote history in their favor – but for the purpose of this theory I will focus on how the Lost Cause shapes the United Daughters of the Confederacy.
The United Daughters of the Confederacy (UDC) is an American hereditary association of Southern women established in 1894 in Nashville, Tennessee. The stated purposes of the organization includes the commemoration of Confederate States Army soldiers and the funding of the erection of memorials to these men.

History recounts the UDC as being solely responsible for the majority of monuments across the South, with a large spike in monuments correlating with the 50th anniversary of the war, at time when the last remaining Confederate Veterans were dying off. The Lost Cause phrases this time period as being the first big push use monuments as permanent references to history as the South believes it to be true, by taking advantage of the importance of the promotion of the monuments to be completed before there were no Veterans left to celebrate.
The UDC is credited—or even blamed—for what many consider to be propaganda and using the monuments as a way to secure their own false narrative and agenda in history books.

Here is where my theory kicks in. I believe the UDC was the face of the push for monuments to be constructed at the turn of the century – however, I do not believe they are the masterminds being it. Instead, I believe Southern States were littered with monuments and memorialize in the early 1900s as a result of nothing more than exceptional marketing. Marketing at the hands of one company – McNeel Marble Company. Lets dive in.

McNeel Marble Company is famous for being the company that constructed the majority of Confederate Monuments we see today, including the one in Rankin Square in Franklin. My theory is built on the premise of the adage “which came first, the chicken or the egg” – What came first, the public interest in building monuments which resulted on McNeel filling a need – or McNeel Marble Works –followed by a campaign to mass produce a product – which in this case are monuments.
A google search of the company revels nothing more than “The McNeel Marble Works of Marietta, Georgia, was purchased in 1892 by Morgan Louis McNeel and his brother, R. M. McNeel. Its location near the Blue Ridge Mountains provided the firm with access to areas where marble and granite could be quarried. The firm is best remembered for the Civil War monuments it constructed in the southern states of the United States.”

In fact, the same few lines found on Wikipedia today are the exact description of the company featured on dozens of publications and news archives dating back to the company’s inception. Verbatim that same company’s description was featured in newspaper advertisements as well as publications covering the construction of monuments. From Texas to Virginia, even for Franklin, Newspapers at the turn of the century almost always included word for word the lines now found on Wikipedia. I found that to be interesting. So I slowly started to tumble into my rabbit hole.

R.M McNeel actually had little involvement with the business and records don’t connect him to the company in any significant way other than name only – id chalk his ownership up to his younger and extremely successful brother “throwing him a bone” – which could very well be wildly incorrect, but based on what I have dug up, that is what I am going with.

Morgan Louis McNeel was the mastermind and big southern money behind the acquisition of the Marietta, Ga based company. Morgan had long since made his living in real estate ventures – buying plantations and selling of parcels for huge profits. Aside from the fortune made through the marble company, Morgan is also credited with creating Cherokee Heights, the first modern subdivision in Marietta shortly after he and his wife Ada were married and the couple inherited the property.

While much of Morgan’s success was in real estate – it was the methods he used that made him a successful businessman. When Morgan and his brother purchased the marble company in 1892 he was just 19 years old. R.M. would have been 23. With the UDC forming and making it their mission to memorialize Confederate Soldiers, Morgan saw a business opportunity. He approached the UDC and devised a plan to work with the organization. To memorialize Confederate Soldiers in the form of statutes across the South.
Morgan visited Chapters of the UDC across the South and sold them the idea of constructing a monument. The UDC didn’t come to him, he went to the UDC. Like a door-to-door vacuum salesman, I believe Morgan and McNeel Marble Works is solely responsible for the spike in monument construction at the turn of the century. McNeel Marble Works often won the contracts from the UDC for the dozens of monuments they lead the charge in constructing – relationships that were initiated by Morgan who would not only visit UDC chapters to promote the idea of a monument – but would also walk members of the UDC and like organizations through fundraising processes on how to get the projects funded.

One historical account said, “The McNeel Marble Company of Marietta, Georgia – maker of the Hot Springs monument as well as monuments in Marietta and Pine Bluff – was perhaps the most active exploiter of patriotism. McNeel even dispatched agents to encourage and coach patriotic organizations on how to orchestrate a monument campaign. The company also offered special prizes to chapter presidents who successfully oversaw a successful unveiling. Another one of its creative marketing strategies was the introduction of the Confederate Memorial Drinking Fountain which the company advertised as combining “Art, Sentiment, and Utility.”

In 1909, McNeel took out an ad in the Confederate Veteran congratulation the UDC for erecting more monuments that year than in the previous decade, with McNeel claiming 95 percent of the statutes.

McNeel mass produced the monuments. The soldiers atop the monuments were generic, and a McNeel monument is easily identifiable as they are all similar.

Another account of the times comments on the lackluster of the work McNeel did, but praised its marketing efforts.

“The Confederate States were monuments not only to the past but also the thoroughly commercialized present. While the Muldoon Company in Louisville turned out middle-aged soldiers bearing mustaches and girths, the Frank Teich Company of Llano, Texas specialized in thin, young and beardless Confederates. The firm that dominated the market, throughout was the McNeel Marble Company of Marietta. While its craftsmanship did not surpass that of its competitors, its sales force did.”

Confederate Monuments were all McNeel Marble Works did. It was 99% of what the business did, with the other 1% being supplying marble for homes constructed in Morgan’s real estate properties.

Newspaper advertisements from McNeel during the time were just as telling as the incentives the companies offered for project completions. 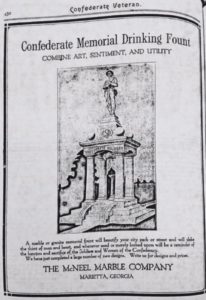 The language featured in the ad for the drinking foundation says “A marble or granite memorial fount will beautify your city park or street and will slake the thirst of man and beast, and whenever used or merely looked upon will be a reminder of the heroism and sacrifice of the Soldiers and Women of the Confederacy.”

In a letter specifically addressed to the United Daughters of the Confederacy McNeel wrote “In regard to that Confederate Monument which your Chapter has been talking about and planning for since you first organized, Why not buy it NOW and have it erected before all the old veterans have answered the final roll call? Why wait and worry about raising funds? Our terms to U.D.C. Chapters are so liberal and our plans for raising funds are so effective as to obviate the necessity of either waiting or worrying. “

The month following that article in the Confederate Veteran, the company took out another ad announcing that as a direct result of that advertising, the company sold 13 monuments to UDC chapters.

When the Great Depression hit, the McNeel fortune fared better than most – which was attributed to the fact that the Marble Works business served as a bank for some family members and the stability of the business saved them from the Great Depression. That stability was solely built on extorting the South’s patriotism, nothing more, nothing less. It was just business, and what big business it was.
One might argue that McNeel’s family business wanted to sprinkle the South with Confederate Monuments to preserve a history they held strong to, but historical records do little to tell that story or dispute it.

Morgan was born in Texas in 1873 to Morgan Louis and Elizabeth Reid. While Morgan’s parent’s marriage was recorded as being conducted by the Confederate Army in 1866, I haven’t been able to uncover any significant military records for his father. Having been 15 when the war started, his father wouldn’t have been old enough to serve much time in the war but due to the marriage in 66, was likely part of the reconstruction. Morgan’s uncle however, was Private Pleasant Duke McNeel and survived the Battle of Murfreesboro, but his military record was short lived as he died at the age of 19 due to Typoid fever. Private Duke died in 1863, 10 years before Morgan was born. Morgan’s grandfather, John Greenville McNeel, was born in 1802, making him 59 when the war broke out, likely too old to serve.
With very little family connection to actual soldiers, and his family moving between Texas and Georgia during his youth, I find it hard to believe that the Civil War had any sort of sentimental connection to Morgan personally, which only furthers my theory that his involvement in building monuments across the South to the Confederacy was nothing more than a business transaction.

So it is my theory – in regards to the INTENT behind how the monuments came to be were nothing more than consumerism. I cant speak to how people view them or how they make them feel – whether that be proud and patriotic or offended and oppressed. 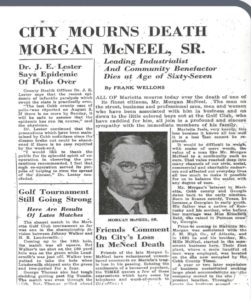 his family’s entire fortune on, which is evident by the widespread coverage of his untimely and unexpected death. The same sentiment that we are sold Valentines Day or Santa – in the 1900s it was monuments.

In the interest of time and length, which has already surpassed what I had anticipated, I won’t go into detail but will only say that what happened in the 1900s for Civil War Soldiers can very closely be compared to Foundation Forward and the Charters of Freedom today. A non profit offers to do the fundraising and the hard work to erect the monuments in public places – is it because of the patriotism they are selling or is it also result of a business motive?