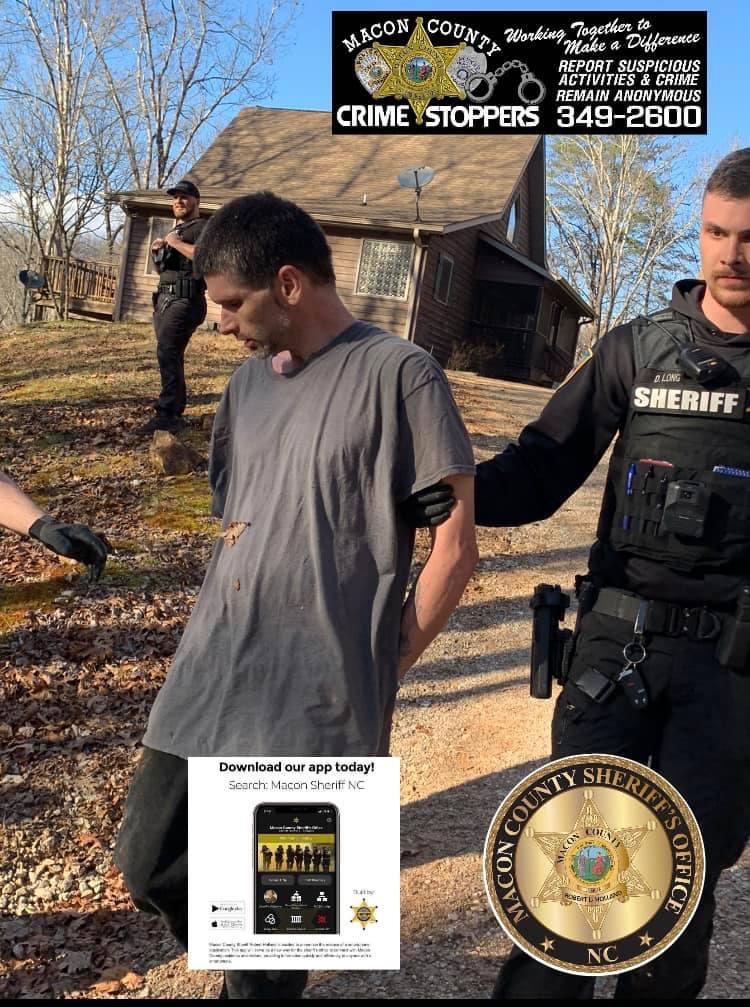 William Dale Sheffield, of Franklin, was arrested following a high speed chase and a brief foot chase. MCSO K9 Corporal Derek Stamey, his K9 partner Jax, along with patrol officers were able to locate Sheffield as he attempted to elude deputies. Sheffield exited his vehicle after coming to the end of a dead end road and fled into a wooded area.

Multiple units responded to the area and were able to set up a perimeter that resulted in the quick capture of Mr. Sheffield by K9 Jax. Mr. Sheffield was being sought for violations of a domestic violence order at the time he was located and was considered a serious risk to others. Sheffield knew he was “Wanted” and was known to be making efforts to evade law enforcement.

Corporal Stamey was on patrol when he was able to observe Mr. Sheffield driving a vehicle on 441 coming down Cowee Mountain towards Franklin. Sheffield refused to stop for bluelights and siren and drive away from the officer in excess of 120mph.

“Mr. Sheffield obviously has no concern for the safety of others and put members of our community in great danger as he drove recklessly at high rates of speed attempting to elude officers,” said Sheriff Robert Holland.  “Due to his current state of mind and the dangers he posed to others, we had no choice but to make every attempt to locate, stop and arrest Mr. Sheffield. It’s a blessing that it ended the way it did and we are very thankful.”

Sheriff Holland noted that following a preliminary review of the incident, deputies should be commended for their efforts.

“I believe that the deputies did an outstanding job,” Said Holland. “While there have been no allegations of wrongdoing against any officers involved and none are suspected, my staff and I will continue to review all In-Car-Camera and Body-Camera video as per policy to see that everything was done appropriately and what we can learn from this incident. The In-Car video and Body-Cam recordings of the incident will also serve as excellent evidence in the prosecution of Mr. Sheffield.”