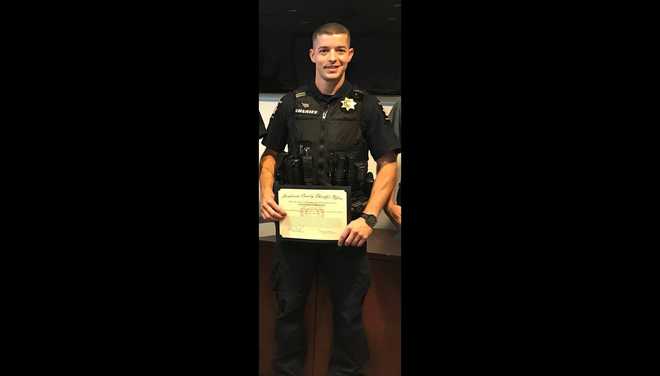 Update: The Family has confirmed that Deputy Hendrix passed away shortly before 1 p.m. today

“As I stand here right now, I can tell you that I am struggling to get through this,” said Sheriff Griffin during a 3 p.m. press conference. “Our office will continue to pray for Hendrix who is very much fighting for his life right now.”

Ryan Hendrix, an 8-year veteran of the Henderson County Sheriff’s Office, was shot by a Robert Ray Doss Jr. outside a residence on Bethea Drive near Hendersonville, Griffin said. Doss was subsequently shot and killed during a gunfight with other deputies on scene.

Hendrix, who is a Marine Veteran and has two children,  remains in critical condition with life-threatening injuries. Hendrix is a member of the Henderson County SWAT team, a Field Training Officer, and was engaged to be married next month.

According to Sheriff Griffin deputies were dispatched to a residence on Bethea Drive around 3 a.m. when a homeowner reported a man breaking into a car. The homeowner said the suspect, later identified as Doss, shattered his bedroom window with a crowbar at which point the homeowner got his family to safety before retrieving his firearm to protect his home.

The homeowner reported to police that he saw the suspect take a gun from the console of the vehicle in front of the home and shots were exchanged between the two men, Griffin said.

The homeowner was not injured and went back into his home. Deputies arrived at the home and found the suspect in a truck across the street, Griffin said.

Griffin said the suspect appeared the comply to show his hands but then fired one round and hit Hendrix in the face. Two other deputies on the scene returned fire and killed the suspect, according to Griffin.

Sheriff Griffin said Doss is from Virginia and was currently wanted by South Carolina Probation and Parole officials.

They said he had a criminal history in South Carolina, Georgia, Maryland and Virginia that includes drug offenses, larceny and felony theft.