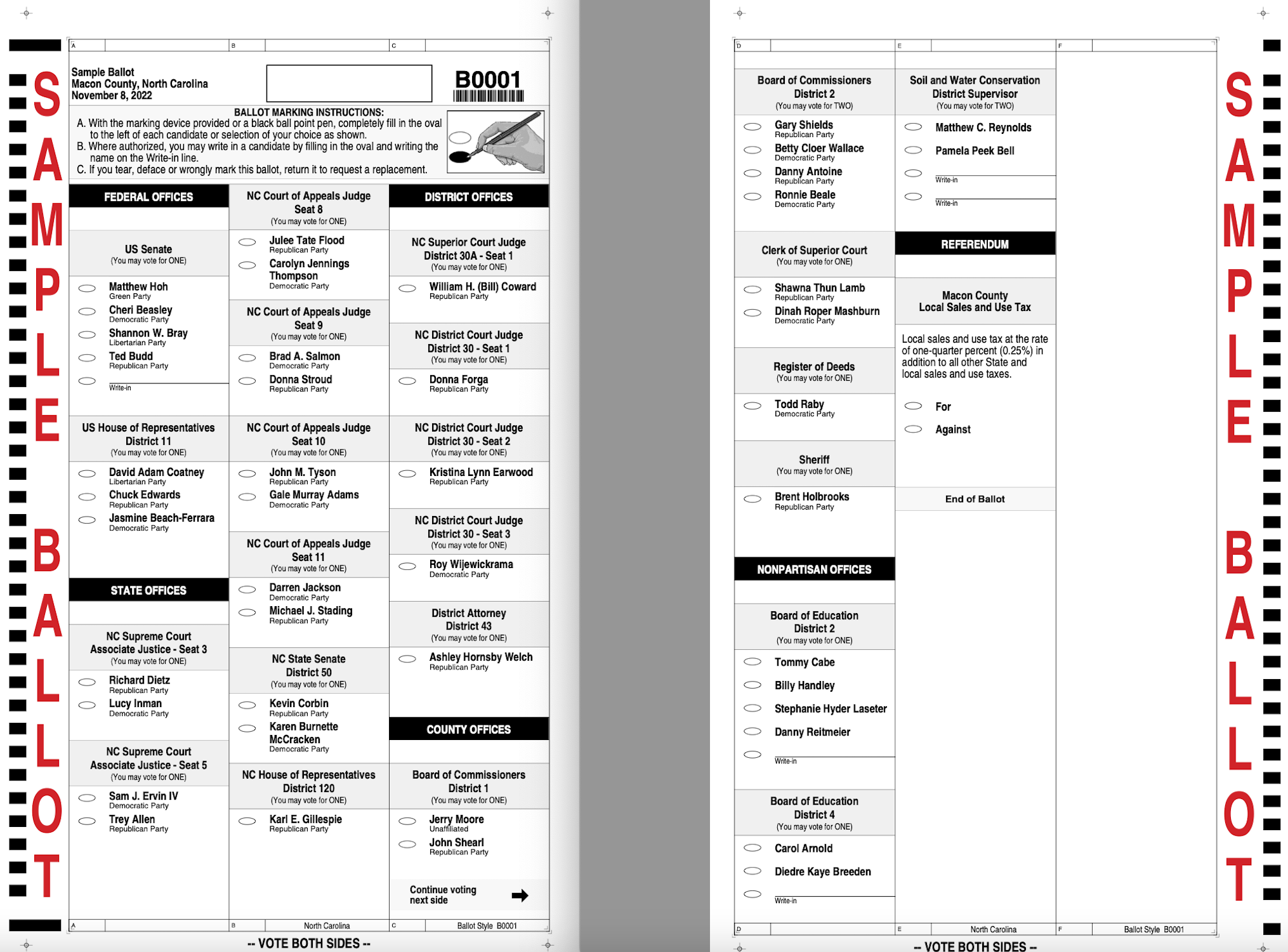 Campaign signs are making their way to roadsides across North Carolina as candidates prepare for the November election. The early voting period for the 2022 general election begins Thursday, October 20, 2022, and ends at 3 p.m. on Saturday, November 5, 2022. Registered voters or eligible individuals in North Carolina may cast an absentee ballot in person during this time. This period is sometimes called “one-stop early voting.”

During early voting, voters may cast a ballot at any early voting site in their county, and would-be voters may same-day register and vote. This is different than Election Day, where registered voters must vote at their assigned polling place. Absentee ballots became available on September 9 with the next significant deadline coming on October 14, which is the last day citizens can register to vote until Election Day.

As we inch closer to Election Day, we will be doing candidate profiles for all elections. In addition to state offices, voters in Macon County will be casting their votes to elect three board of commissioners, two board of education members, and voting either ‘for” or “against” a ballot referendum which states: “local sales and use tax at the rate of one-quarter percent (.25%) in addition to all other State and local sales and use taxes.

Voters will have the chance to vote for Sheriff, Clerk of Superior Court, Register of Deeds, and Soil and Water Conservation District Supervisor as well, although those races are all uncontested and feature just one candidate, with the exception of Clerk of Superior Court. While Dinah Roper Mashburn’s name will be included on the ballot for the Democratic Party, she has recently announced that she is suspending her campaign and is putting her support behind the Republican candidate and current interim Clerk of Superior Court, Shawna Thun Lamb.

Macon County residents will first cast their vote for the Macon County Board of Commissioner District 1 seat — which represents the Highlands, Elijay, Flats, and Sugarfork area of the county. Voters will pick between either Highlands Resident and unaffiliated candidate Jerry Moore, or Ellijay resident and Republican candidate John Shearl. Both Moore and Shearl are considered newcomers in the race as the incumbent for the seat, Jim Tate, announced his retirement from the board earlier this year.

On the back side of the ballot, voters will then be asked to cast their votes for TWO candidates under the Board of Commissioner District 2 seat — which represents Iotla, Millshoal, North Franklin, east Franklin, South Franklin, Union, and Smithbridge.  There are TWO seats up for election, meaning every voter can select TWO out of the four names that appear on the ballot. Incumbents Ronnie Beale (Democrat) and Gary Shields (Republican) are running for re-election and will be facing challengers Betty Cloer Wallace (Democrat) and Danny Antoine (Republican).

In total, Macon County voters will be selecting THREE commissioners — and because November is a general election, not a primary election, any voter can vote for any candidate, regardless of political affiliation. All candidates will appear on the same ballot.

For the Board of Education District 4 seat, which serves at the board’s “at-large” seat covering the entire county, the ballot will include incumbent Carol Arnold and challenger Diedre Kaye Breeden.