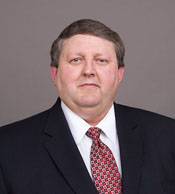 Macon County Commission Vice-Chair Ronnie Beale announced today that he plans to seek re-election to the Board of Commissioners.

“As soon as filing re-opens and I am able, I will file for re-election for the Macon County Board of Commissioners,” said Ronnie Beale. “We have been able to accomplish many things over the last 15 years that I have served on the board, but there is still work to do. I hope to be given the opportunity to continue doing what I have always vowed to do, and that is serve the folks of Macon County.

Ronnie Beale was first elected to the board in November 2006. A Macon County business owner, Ronnie and his wife Cissy have three children, Cara Higgs (Bill), Evan, and Barrett, and live in the Iotla community.

Mr. Beale graduated from Franklin High School in 1973 and has owned and operated Beale Construction since 1980.

Mr. Beale’s current involvement includes serving on the board for Macon County Fair, and Macon County Heritage Foundation. Ronnie represents the Board on the Department on Aging Advisory Board, Inspections/Building Committee, Law Enforcement, Courthouse Security,  and the Commissioner’s Advisory Committee for Vaya Health.