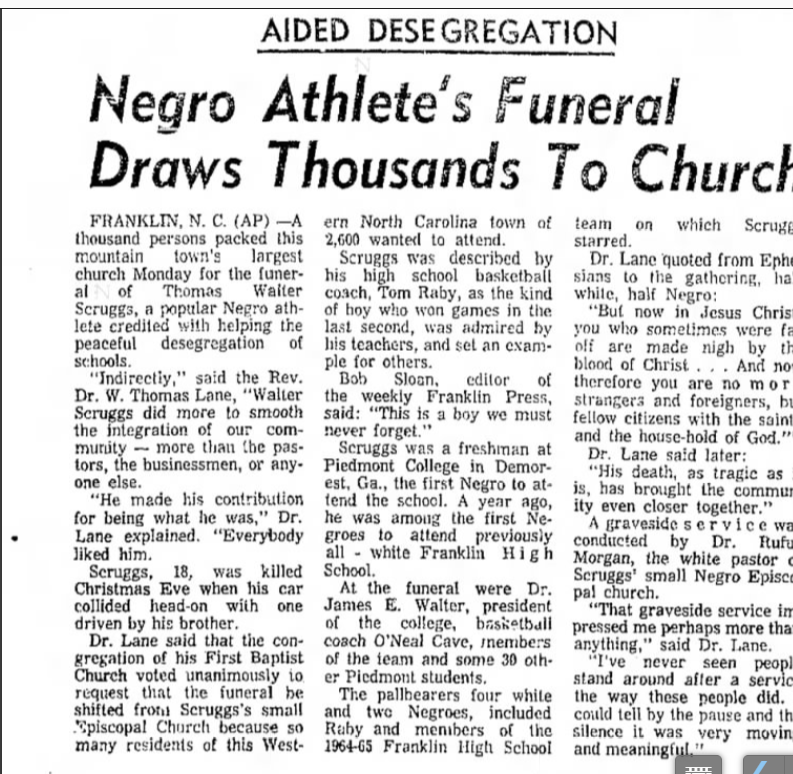 Macon County after the Civil War

The building currently used as the Macon County Schools Central Office served as an all-black school during the era of segregation. At the time, it was one of the newer constructed schools, and housed all African-American students across the county.

The Supreme Court’s 1954 unanimous ruling on Brown v. Board of Education famously concluded that segregation of children in public schools solely on the basis of race deprives the children of the minority group of equal educational opportunities.

Despite the federal ruling, North Carolina resisted integration. In 1956, Governor Luther Hodges called a special session of the General Assembly to adopt a state plan in response to the Brown decision, which he described as “one of the greatest crises which North Carolina has ever experienced.”

The Pearsall Plan was finally declared unconstitutional in 1969 in Godwin v. Johnston County Board of Education. In 1971, a team of NAACP lawyers led by Chambers successfully argued in Swann v. Charlotte-Mecklenburg Board of Education that the district had to use student assignment and busing to integrate its schools. Subsequently, Charlotte became a national leader for school integration.

In Macon County, there was a prominent Black presence, even though the overall population was not large. Aside from what is now the administrative building, individual communities had Black-only schools. A Black school in Cowee employed a single teacher, Mrs. S.C. Anderson, a white lady. The Cowee School eventually merged with the Chapel School, the Black school within town limits.

In 1922-23, the Chapel School, which had two teachers, received an appropriation to be constructed at the cost of $3,000.The School fully opened in August 1935. During the 1940-41 school year, 21 high school students and 122 elementary students were enrolled at the school. By 1935, records show there were 113 elementary students and four teachers under the leadership of Principal R.B. Watts and teachers, D.B. Barber, Emma S. England, and Beulah Martin. By 1940, the Chapel School sat two miles outside of Franklin City limits and served as the only Black school in the county.

Macon County Historical Society Museum Curator Robert Shook said he remembers being a freshman at Franklin High School during integration. As a freshman, he remembered the change in the school system, but doesn’t recall it being an issue within Franklin. However, Shook does recall an event that speaks to the changing times and integration relations in Franklin

“I remember being in high school and the night that Willie Scruggs died,” said Shook. “Willie was a Black athlete at the high school and boy could he play ball. When we were still in school, he got into a car wreck and he passed away. I remember the whole town being sad. There must have been over 1,000 people at his funeral.”

While Scruggs was a prominent Civil Rights leaders for Franklin and Western North Carolina before reaching the age of 18, his influence was tragically cut short after being killed in a car accident when the car he was driving collided with another car that was driven by his very own brother on Christmas Eve, 1965.

Newspaper reports published across the state after his death credited Scruggs with being the reason desegregation was as smooth as it was in Macon County, which was further evident by his funeral, which included four white pallbearers and two Black ones.

Eddie Ray was the grandson of Nan and Matt Ray, former slaves who after the Civil War were able to donate the land on which Ray’s Chapel AME Zion Church was built in Franklin. Nan moved to Franklin as a young girl shortly after the Civil War ended for better education, which is where she met he husband Matt. Eddie Ray, who is now in his 90s and lives in Gastonia, made his mark in the recording industry.

Ray’s career as vice president of Capitol-Tower Records in Hollywood, Calif., reportedly the first African-American to hold such a position, is detailed in a book, “Against All Odds: The Remarkable Life Story of Eddie Ray, A Pioneer Music Man.” Because of his roots in Macon County, Eddie’s book is available at the Macon County Historical Museum. Eddie worked in the recording industry with such greats Fats Domino, Ricky Nelson, Slim Whitman, and many more, especially during his time with Imperial Records.

Ray’s book recalls his childhood in Franklin, ‘The rectangular brown box with the big black knobs sat on the floor in the corner of our living room,” begins Chapter 12. “I don’t remember a time we didn’t have a radio. I do remember when we got indoor plumbing, I was around eleven years old. But the big Zenith radio was always there. We may have been among the first Black families in our community to get one – either actually, running water or a radio. Little did I know as a young boy how important the latter would be in shaping my life. However, I didn’t have to think about the future much as a youngster. I was blessed to be born into a close knit two-parent home in a small, picturesque town situated on the foothills of the Great Smoky Mountains. Franklin, North Carolina was a resort community, where rich white families would come to their vacation homes in the winter ski, or the summer to fish in the crystal-clear mountain lakes and to enjoy the cool summer nights.”

Ray goes on to describe growing up in Franklin during the Civil Rights era and being sheltered from the trouble most experienced. “Our home was a safe haven – an oasis from the most despicable racist practices you could ever imagine that permeated our picturesque southern town. NO, I didn’t witness any lynchings, cross burnings, bricks thrown through windows, but I was born into the Jim Crow era of separate eating places, separate drinking fountains, separate toilets, black and white textbook for schools – separate and substandard everything.”

While Ray’s father, Andrew Ray, was a prominent, successful business man and a leader in the Black Community, he never ran for public office. Macon County’s didn’t see their first, and only to date, black elected official until 2002 when Jay Shepherd was elected to the Macon County Board of Commissioners.

Shepherd, a Democrat served as commissioner from 2002-2006, losing his re-election bid during the primary election of 2006 to challengers Bob Simpson and Ronnie Beale. Beale, who went on to win the general election, beat Shepherd in the primary with 1352 votes to Shepherd’s 1,116.

One of the most significant accomplishments of Shepherd’s tenure on the board included the groundbreaking for the Macon Campus of Southwestern Community College in August 2005.