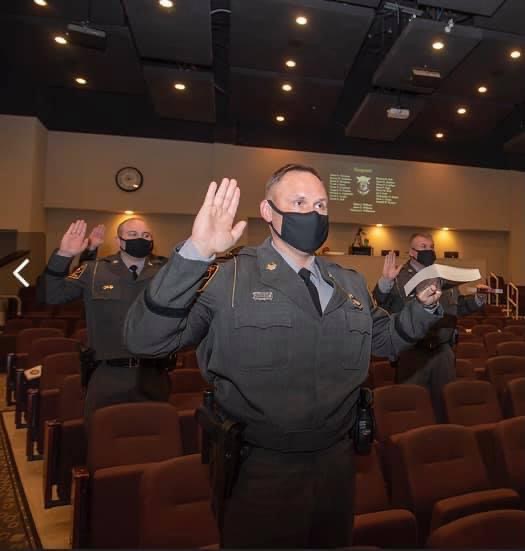 Two local Troopers among 51 sworn members promoted across the state

The State Highway Patrol recognized the promotions of 51 sworn and 5 civilian members today during a private ceremony held at Colonial Baptist Church in Cary. The event was conducted in celebration of those who received a promotion throughout the end of 2020 and the beginning of 2021.

Among the 51 sworn members of the North Carolina Highway Patrol recognized with promotions for thier unwavering servcie were Swain County based Trooper Aaron Ammons and Jackson County based Trooper Brody Crawford. Both Ammons and Crawford were promoted to the rank of Sergeant within the North Carolina Highway Patrol. With the promotion comes a new assignment with Sergeant Ammons being reassigned to Polk County and Sergeant Crawford being reassigned to Henderson County.

The ceremony began with an invocation provided by Pastor Steve Stadtmiller and the singing of the national anthem by Sergeant Brent M. Tyler. Remarks were provided by Col. Glenn M. McNeill, Jr., who provided a challenge to those receiving their new promotion.

“The joy you experience in receiving this promotion is much deserved, you represent so much of what is great about our esteemed agency,” said Colonel McNeill. “Don’t however become content in this new role, push yourself to grow personally, professionally and further your skills to better undertake our lifesaving mission in service to our great state.”

The promoted members were administered their oath of office by Chief Justice Paul Newby of the Supreme Court of North Carolina. Lt. Col. Jeff Gordon provided remarks to those receiving civilian promotions, recognizing their commitment to excellence in serving our state. The event was concluded by Pastor Stadtmiller who offered the benediction.

As a result of safety concerns associated with the current pandemic, universal COVID-19 precautions were conducted throughout the event. These efforts included multiple rank specific promotional sessions, the mandated use of mask by everyone in attendance and increased social distancing when applicable. In an effort to celebrate each member’s success with family, friends and the public, the ceremony will be posted to the SHP’s social media platforms for viewing.